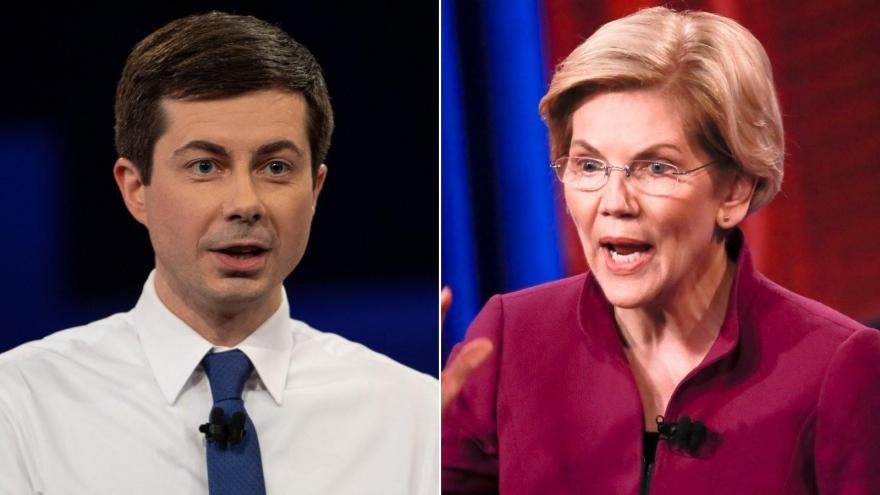 Sen. Elizabeth Warren of Massachusetts and South Bend, Indiana, Mayor Pete Buttigieg both unveiled plans to expand LGBTQ protections and promote equal rights on the day of an LGBTQ town hall hosted by CNN and the Human Rights Campaign Foundation.

The three candidates, whose plans are all similar, list passing the Equality Act as a top priority. The bill, which has passed the House of Representatives but has not been taken up by the Senate, would amend the Civil Rights Act of 1964 and other civil rights laws to include sexual orientation and gender identity as protected characteristics.

Warren, Buttigieg and Harris, along with several other 2020 Democrats, have been vocal about LGBTQ issues and rights throughout their presidential campaigns. Buttigieg stands out in the crowded 2020 Democratic field as someone who, if elected, would be the first man married to a same-sex partner to be president of the United States.

These plans come ahead of the CNN/Human Rights Campaign Foundation town hall, where Democratic presidential candidates will take questions from the audience and CNN journalists on specific LGBTQ concerns as well as their plans to promote equality and civility. The town hall will air Thursday from 7:30 p.m. to 12 a.m. ET.

The three candidates pledge to reverse the Trump administration's rollbacks of LGBTQ protections, including the ban on transgender military service members and religious exemption policies. Warren writes the US must end "the weaponization of religion to discriminate against or harm LGBTQ+ people."

Warren and Buttigieg would lift the rule by the Food and Drug Administration that restricts men who have had sex with other men in the past year from giving blood. Warren called the measure "discriminatory." Buttigieg said it was "put in place in reaction to fear rather than science."

Both would aim to make make HIV-prevention drugs more affordable and accessible. PrEP is a daily pill for HIV-negative people that helps reduce the risk of infection. Warren proposes manufacturing the drug publicly to lower costs and make it more available. Buttigieg writes that he would "pursue aggressive price negotiations" for PrEP and if those negotiations failed he would "consider exercising eminent domain on PrEP-related patents."

Harris pledges to take action to reduce the price of PrEP, and would use the government's authority under laws like the Bayh-Dole Act and Section 1498 to make the drugs more affordable and accessible.

Warren, Buttigieg and Harris would prohibit discrimination against potential adoptive or foster parents and children based on sexual orientation or gender identity.

The three candidates would prohibit nationwide gay conversion therapy, a widely discredited practice that claims to undo homosexuality. On his 2000 US House campaign website, Vice President Mike Pence signaled support for federal funds to be allocated for gay conversion therapy, and his website read, "resources should be directed toward those institutions which provide assistance to those seeking to change their sexual behavior."

Harris would appoint a chief advocate for LGBTQ+ affairs in the White House, and fund a new office designed to work across agencies to address LGBTQ issues.

Warren and Buttigieg commit to being global leaders on LGBTQ rights, and would fight against persecution and discrimination.

Warren would return the US to the United Nations Human Rights Council and would appoint a "Special Envoy for the Human Rights of LGBTI Persons and ensuring that the work of advancing LGBTQ+ rights is incorporated across regional bureaus."

Buttigieg would strengthen protections for LGBTQ immigrants and refugees, and would pass legislation that recognizes same-sex relationships from countries where civil marriage is not available or accessible to such couples.