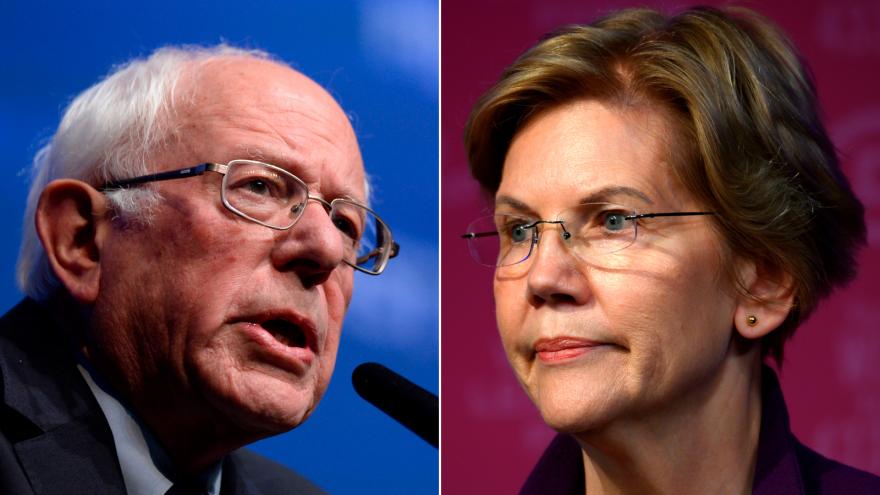 (CNN) -- Sen. Elizabeth Warren on Monday night said that 2020 rival Sen. Bernie Sanders told her during a private meeting in December 2018 that he did not believe a woman could win the presidency.

"Among the topics that came up was what would happen if Democrats nominated a female candidate," Warren said of the meeting with Sanders in a news release Monday night.

"I thought a woman could win; he disagreed."

CNN first reported Monday that, according to four sources, during the 2018 meeting Sanders had told Warren he did not believe a woman could win.

Sanders had expressed frustration at what he saw as a growing focus among Democrats on identity politics, according to one of the people familiar with the conversation. Warren told Sanders she disagreed with his assessment that a woman could not win, three of the four sources said.

Sanders denied the characterization of the meeting in a statement to CNN, stating it is "ludicrous to believe that at the same meeting where Elizabeth Warren told me she was going to run for president, I would tell her that a woman couldn't win."

"It's sad that, three weeks before the Iowa caucus and a year after that private conversation, staff who weren't in the room are lying about what happened. What I did say that night was that Donald Trump is a sexist, a racist and a liar who would weaponize whatever he could," Sanders said. "Do I believe a woman can win in 2020? Of course! After all, Hillary Clinton beat Donald Trump by 3 million votes in 2016."

Warren said Monday she had "no interest in discussing this private meeting any further" because "Bernie and I have far more in common than our differences on punditry."

"I'm in this race to talk about what's broken in this country and how to fix it -- and that's what I'm going to continue to do. I know Bernie is in the race for the same reason," she said. "We have been friends and allies in this fight for a long time, and I have no doubt we will continue to work together to defeat Donald Trump and put our government on the side of the people."

Still, her statement marks a public break in the careful efforts that she and Sanders appear to have made to manage their friendship and political rivalry even before the 2020 race was officially underway.

Three weeks ahead of the Iowa caucuses, Warren is now the only woman polling in the double-digits nationally. A new CNN/Des Moines Register/Mediacom poll showed Warren in a four-way race in Iowa, along with Sanders, former South Bend, Indiana, Mayor Pete Buttigieg and former Vice President Joe Biden. In that survey, Sanders and Warren performed nearly equally well as the top choice among female likely Democratic caucusgoers, while Sanders and Buttigieg were the top choice among men.

This story has been updated with additional background on the 2020 race.