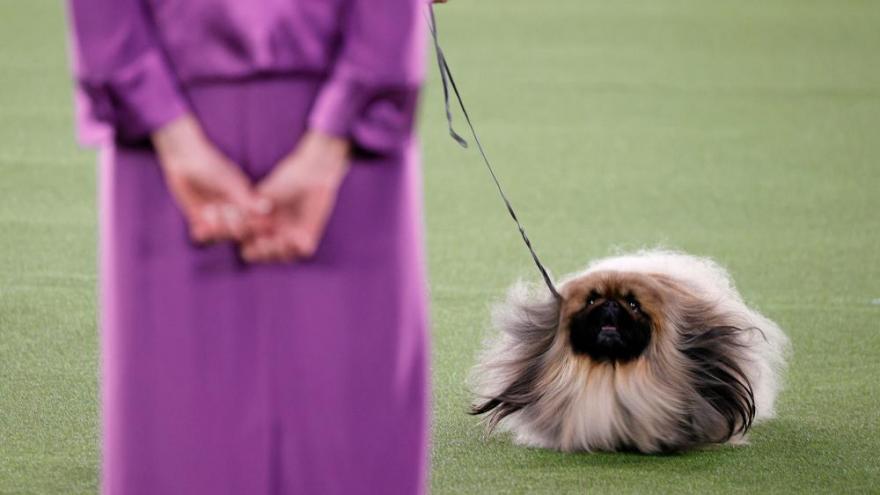 Wasabi the Pekingese won Best in Show at the 145th Annual Westminster Kennel Club Dog Show on June 13, at the Lyndhurst Estate in Tarrytown, New York.

The reserve slot, or runner-up, was given to Bourbon the whippet.

The Westminster Dog Show is the second-oldest continuous sporting event in the United States, after the Kentucky Derby. It has run through world wars, previous pandemics and economic depressions. Last year, amid the pandemic, the event was moved to June.

The competition was held at the Lyndhurst Estate in Tarrytown, New York. It was the first time the competition has taken place outside of New York's Madison Square Garden, where it has been held every year since 1877. It was was relocated this year because of the Covid-19 pandemic.

It is also the longest nationally televised live dog show, according to the Westminster Kennel Club.

"Without a doubt the entire sport of dogs is grateful to the Westminster Kennel Club members and their staff for persevering through troubled times to bring us out to this gorgeous estate and create this show for the ages. We thank them all for all they've done," Trotter said.

Trotter thanked the dogs, trainers, breeders and organizers for bringing the show to fruition amid trying times.

"We love all dogs as dog lovers. Mixed breeds and purebreds. They're all pets. Now, every pet may not be a show dog, but be assured, every show dog is a pet."

The judge noted she was happy to see this year's dogs, some of which are descendants of dogs she's judged before.

"I've seen the ancestors of several of these dogs over the years. So to the breeders and owners and handlers and trainers and conditioners, you're on top of your game. All of you," she said.

Wasabi will celebrate his win

"He can have a filet mignon and I'll have champagne," Fitzpatrick said.

Fitzpatrick, whose other dog, Malachy, won Best in Show in 2012, attributed Wasabi's win to his individuality.

"He's just a wonderful dog and he's made correctly. He has showmanship," Fitzpatrick said. "He fits the breed standard. He has that little extra something, that little sparkle that sets a dog apart."

When asked how much he'll be carrying around Wasabi after Sunday's win, Fitzpatrick replied, "As much as he needs. He deserves his own chariot."

Before a dog can be selected as Best in Show, it must win Best of Breed and then the group category.

The winners for each group on Sunday were:

Hound Group -- Bourbon the whippet, who won the reserve slot, or runner-up

Toy Group -- Wasabi the Pekingese, who won Best in Show

Sporting Group -- Jade the German shorthaired pointer, whose mother, CJ, was crowned Best in Show in 2016