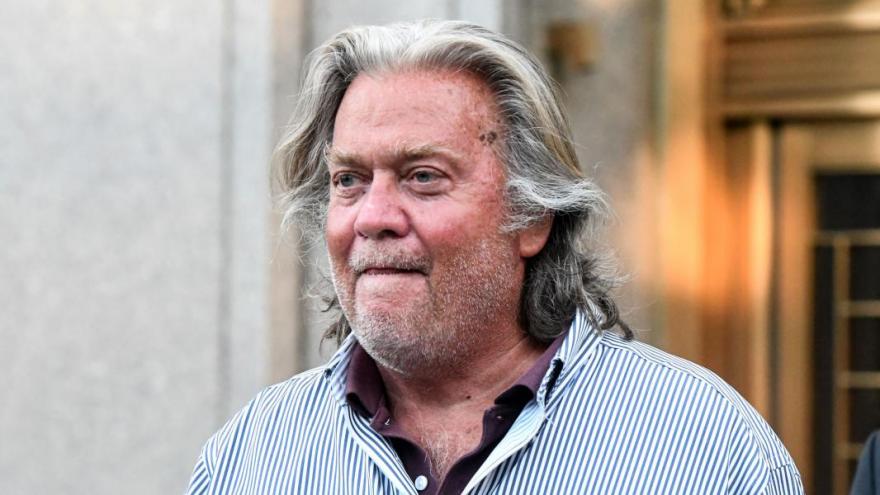 (CNN) -- The Manhattan District Attorney's Office is considering bringing state charges against Steve Bannon related to the same border wall fundraising campaign fraud scheme for which he was federally charged and then granted a presidential pardon, according to The Washington Post.

Discussions on whether a state case can be brought against Bannon for his role in the scheme are in the early stages by investigators in Manhattan District Attorney Cyrus Vance's Major Economic Crimes Bureau office, the Post reported, citing people with knowledge of the matter who spoke on the condition of anonymity to discuss the office's deliberations.

Bannon received a last-minute pardon from former President Donald Trump last month related to federal charges that he and three others defrauded donors of more than a million dollars as part of a fundraising campaign purportedly aimed at supporting Trump's border wall.

The newspaper also reported that it's unclear if the US attorney's office in Manhattan that is handling Bannon's case, which has not formally been dismissed, is working with the state prosecutor's office in its investigation. It's also not clear if a judicial "sharing order" that is necessary to swap evidence between the two offices has been secured, the Post also reported.

The Manhattan DA's office declined to comment to CNN. CNN reached out to Robert Costello, an attorney for Bannon, for comment Wednesday.

Bannon and three others were accused of allegedly using hundreds of thousands of dollars donated to an online crowdfunding campaign called We Build the Wall for personal expenses, among other things.

Bannon and another defendant, Brian Kolfage, allegedly promised donors that the campaign, which raised more than $25 million, was "a volunteer organization" and that "100% of the funds raised ... will be used in the execution of our mission and purpose," according to the indictment. Instead, according to prosecutors, Bannon, through a nonprofit under his control, allegedly used more than $1 million from We Build the Wall to "secretly" pay Kolfage and cover hundreds of thousands of dollars in Bannon's personal expenses.