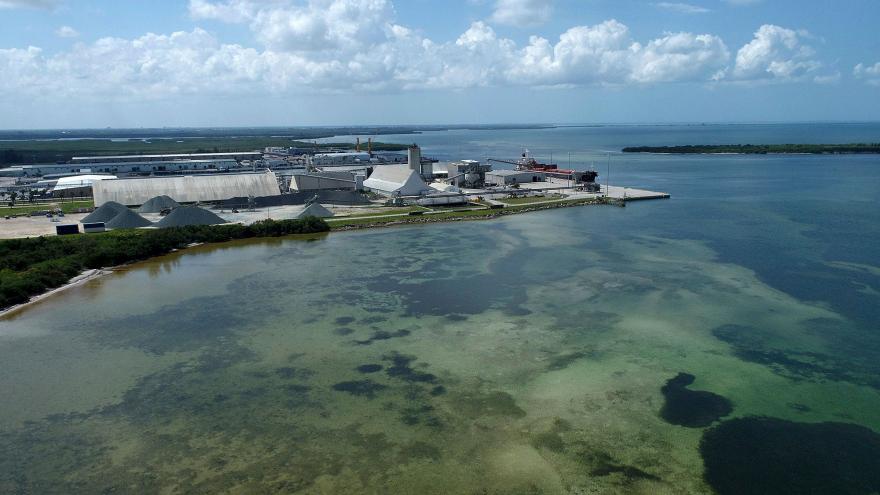 Scientists are ramping up their efforts to track the nutrient-rich wastewater, contaminated by the Piney Point phosphogypsum stack, that\'s dumping into Florida\'s Tampa Bay, as concern remains high that it could supercharge potential toxic algae blooms, including red tide. - Tiffany Tompkins/The Bradenton Herald/AP

(CNN) -- Scientists are ramping up their efforts to track the nutrient-rich wastewater, contaminated by the Piney Point phosphogypsum stack, that's dumping into Florida's Tampa Bay, as concern remains high that it could supercharge potential toxic algae blooms, including red tide.

Ultimately, it will take weeks and months for the effects of the wastewater to be fully realized, assistant director of the Tampa Bay Estuary Program Maya Burke told CNN.

But what's actually in the wastewater already has some people concerned.

Officials have yet to describe the water's pollution in detail, and parts of the in-depth results from water sampling done by the Florida Department of Environmental Protection remain absent from its website. However, the wastewater has previously been described broadly by officials as having elevated levels of nitrogen and phosphorus, being acidic and not radioactive, and that it, "meets most water quality standards for marine waters."

Florida's DEP tallied the amount of wastewater dumped into the bay at approximately 173 million gallons in a news release on Thursday.

The elevated concentrations of nitrogen and phosphorus are some of the most concerning descriptors because they are known to fuel phytoplankton growth that can lead to a potentially toxic algal bloom.

That's why in response to the crisis, the University of South Florida's College of Marine Science is deploying all of its resources to monitor the wastewater and water quality in the bay. It's something that the university says it has not done on this level in the Gulf of Mexico since the 2010 Deepwater Horizon oil spill.

"What you want to be able to do is see if you can identify (the wastewater and nutrients) in the system and know where it goes," USF College of Marine Science dean Tom Frazer told CNN by phone.

The new environmental crisis comes as the region continues to recover from the prolonged 2018 red tide bloom that choked miles of Florida's coast, killing a significant amount of marine life and stunting its beach tourism industry, the bedrock of the Sunshine State's economy.

The shadow of the wastewater now clouds the fragile hope that had been growing for more tourists to return to the sandy shores.

The threats the wastewater poses to marine life

Despite polluted water still being dumped into Tampa Bay, there is some good news. Burke and Frazer both say that there haven't been any reported fish kills in the discharge area.

There was some concern, she and Frazer said, that the acidity and amount of ammonium nitrate in the reservoir discharge water could prove immediately deadly to marine life.

"Low levels of ammonia (unionized and ionized) can cause problems for aquatic organisms even if the exposure period is short," Frazer said, saying that most frequently, those problems are seen in fish tanks. "They are observed less frequently in open estuarine and marine systems where fish, for example, can move away from the contaminated water or the contaminated water is quickly diluted as consequence of tidal action, currents and wind mixing."

But the danger, and the waiting game, surrounds what effect the nutrients in the wastewater -- the nitrogen and phosphorus -- will have on any potential algae blooms.

"This is double the amount of nitrogen that this basin should see over the entire year, being delivered in two weeks," Burke said.

Algae blooms occur naturally, and are oftentimes seasonal, but they feed on nutrients like nitrogen and phosphorus. Dumping nutrient-rich wastewater can trigger explosive growth of any algae blooms, they say.

"Depending on the nature of the bloom, there are a variety of potential negative ecological effects ranging from low dissolved oxygen in the water to the production of toxins," Frazer said. "Toxins produced by Karenia brevis (red tide), for example, can kill fish and wildlife and aerosolized toxins can also be harmful to humans, especially those prone to respiratory problems."

Another concern is macroalgae blooms, which Burke says go through "boom and bust" cycles. They feed and grow in the backwaters of the bay, and toward the end of their life cycle, die off and smother everything.

"This time of year really favors macroalgae because we don't have a lot of freshwater flow and input from our river systems," Burke says.

There's no reversing the wastewater, or potential algae blooms

Managing the wastewater pollution, in this case, isn't about containment. Unlike oil spills, where massive containment booms are set up to control the spread, the wastewater will mix quickly with the brackish bay water.

There's nothing that can be done afterward, either, to remove the nutrients from the bay.

That's why Frazer and the rest of USF's College of Marine Science mobilized to track it.

From there, USF and the state can better prepare for the effects of pollution.

The other bad news is that, should the worst come to pass and an algae bloom growth explodes, there's minimal efforts authorities and scientists can do to stop it.

Macroalgae blooms, which occur most frequently in the deepest recesses of a bay, can at times be scooped up before they smother the life out of everything they cover.

For other algae blooms like red tide, there's no algaecide that can prevent, or curtail, an outbreak. If a bloom reaches an area of water saturated with nutrients, it will continue growing as long as conditions are favorable and there's a nutrient source.

That's why Burke emphasizes what science has repeatedly shown all along.

"The best solution is to prevent the nutrients from entering the water body," Burke continued. "That's where it's at. It's not rocket science. We understand the relationships."