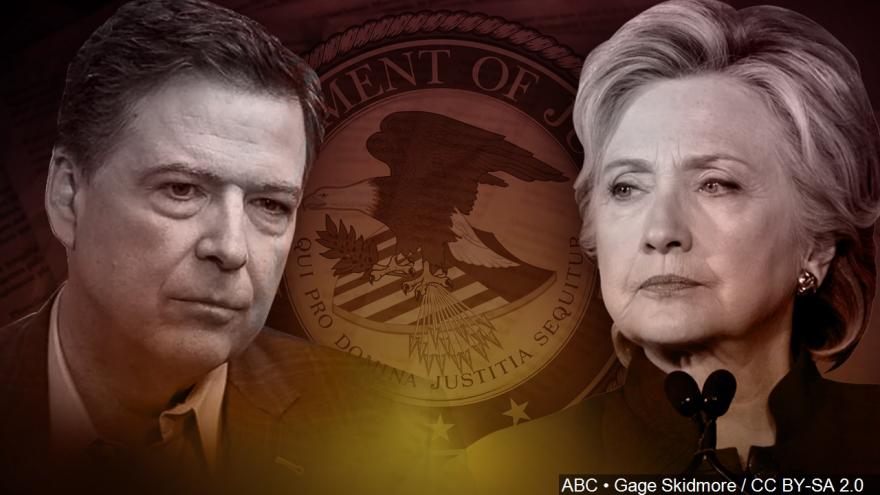 The 500-page document stops far short of endorsing the attacks levied at Comey for the last year by President Donald Trump.

Although Trump has alleged that a politically tainted FBI tried to undermine his Republican campaign, the report found nothing to suggest that political preferences influenced how the investigation was conducted.

Trump has suggested anyone less politically connected than Clinton would have been charged for the same behavior, yet the report does not second-guess the FBI's decision to spare her from prosecution.

And while the president has said Comey's deputy, Andrew McCabe, should have recused himself because of Democratic political contributions to his wife, the report said he acted appropriately in flagging the issue inside the bureau.

"We found no evidence that the conclusions by the prosecutors were affected by bias or other improper considerations; rather, we determined that they were based on the prosecutors' assessment of the facts, the law and past department practice," the report says.

Yet there's no doubt the report gave Trump fresh ammunition for continued attacks on Comey and for his defense that Comey's firing in May 2017 — an act now central to special counsel Robert Mueller's investigation into whether the president sought to obstruct justice — was wholly justified.

The report branded Comey as insubordinate for repeatedly breaking with Justice Department protocol in his handling of the email probe in the explosive final months of the 2016 presidential campaign. It also sharply rebuked FBI officials who traded politically charged, anti-Trump text messages even as the investigation into the campaign was underway.

The report released Thursday documents in painstaking detail one of the most consequential investigations in modern FBI history and reveals how the bureau, which for decades has endeavored to stand apart from politics, came to be entangled in the 2016 presidential election.

It underscores efforts by FBI and Justice Department leaders to juggle developments in the Clinton investigation — she had used private email for government business while secretary of state — with a separate probe that was then unknown to the American public into potential coordination between the Trump campaign and Russia.

Comey, whom Trump fired shortly after taking office, bore the brunt of much of the report's criticism.

It says the FBI director broke from Justice Department protocol when he announced in July 2016 that Clinton had been "extremely careless" with classified material but would not be charged with any crime, and again months later when he told Congress just days before the election that the investigation into Clinton's emails had been reopened.

Though it says those mistakes weren't politically motivated, Trump supporters seized on the report's description of Comey as "insubordinate." And they quickly focused on the report's recounting of anti-Trump text messages from two FBI officials who worked the Clinton probe and later the Russia case, including one from August 2016 in which an agent says, "We'll stop it," with regard to a possible Trump victory.

The report suggests that text from Peter Strzok, who was later dropped from Mueller's team, "implies a willingness to take official action to impact the presidential candidate's electoral prospects." It did not find evidence that those views seeped into the investigation.

White House press secretary Sarah Huckabee Sanders said the report "reaffirmed the president's suspicions about Comey's conduct and the political bias amongst some of the members of the FBI."

FBI Director Chris Wray told reporters the FBI accepted the report's findings and was making changes, including requiring further training for FBI employees and re-emphasizing the importance of objectivity. In a New York Times opinion piece released after the report, Comey said he disagreed with some conclusions but respected the watchdog's work.

The inspector general faulted Comey for his unusual July 5, 2016, news conference at which he disclosed his recommendation against bringing charges, even though cases that end without prosecution are rarely discussed publicly. Comey did not reveal to Attorney General Loretta Lynch his plans to make an announcement.

"We found that it was extraordinary and insubordinate for Comey to do so, and we found none of his reasons to be a persuasive basis for deviating from well-established Department policies in a way intentionally designed to avoid supervision by department leadership over his actions," the report says.

Comey has said he was concerned that the Justice Department itself could not credibly announce the conclusion of its investigation, in part because Lynch had met days earlier aboard her plane with former President Bill Clinton. Both said they did not discuss Hillary Clinton's case.

Concerned about the "appearance that former President Clinton was influencing" the probe, Lynch began talking to her staff the next morning about possibly recusing herself from overseeing the investigation, the report says. She told the inspector general she decided not to step aside because it might "create a misimpression" that she and the former president had discussed inappropriate things.

Bill Clinton, also interviewed in the IG investigation, said he had "absolutely not" discussed the probe.

Also criticized was Comey's decision, despite the discouragement of the Justice Department, to reveal to Congress that the FBI was reopening the investigation following the discovery of new emails.

The FBI obtained a warrant nine days before the presidential election to review those emails, found on the laptop of former U.S. Rep. Anthony Weiner, D-N.Y., — the husband of top Hillary Clinton aide Huma Abedin — and ultimately determined there was nothing that changed its original conclusion.

The report faulted the FBI for failing to act with more urgency in reviewing emails from Weiner's laptop, saying the inaction had "potentially far-reaching consequences." Clinton supporters say her name could have been cleared well before the election had the FBI moved faster to review the emails. Comey said had he known earlier about the laptop's import, it might have affected his decision to notify Congress.

The Weiner laptop was discovered as the FBI was upgrading the nascent Russia investigation. Though there's no evidence the device was put on the back-burner to protect Clinton, the watchdog said it could not be certain that Strzok's decision to prioritize the Russia probe over examining the Weiner laptop was "free from bias," especially because Strzok was exchanging anti-Trump text messages at the time.

The report lambastes Strzok and a now-retired FBI lawyer, Lisa Page, for text exchanges that it says were "deeply troubling" and created the appearance "that investigative decisions were impacted by bias or improper considerations." Most of the problematic texts relate to the FBI's Russia investigation, the report notes.

Both Strzok and Page acknowledged that some of their texts could be read as showing bias against Trump, but both insisted bias played no part in their work.

"But my emails," she said, reacting in a three-word tweet.