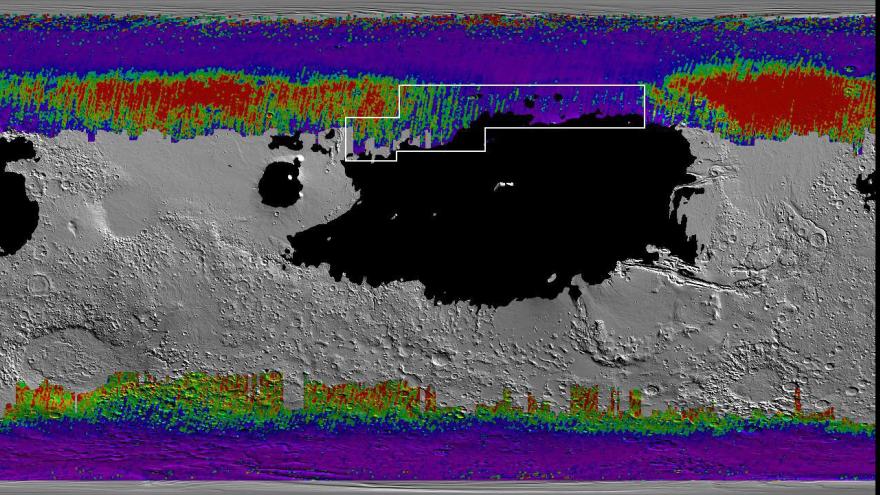 (CNN) -- When the first astronauts land on Mars, they won't be able to take everything they need with them. The logistics and weight of transporting so much material on one spacecraft, along with a crew, defies current technology. While scientists at NASA have discussed missions to deliver materials to the Red Planet ahead of a manned mission, there may be resources on Mars that can be used.

One of those key resources is water, but access to the water is just as crucial to determine. Knowing the location of accessible water on Mars could even help determine a landing site for a manned mission.

A new study published this week in the journal Geophysical Research Letters shows a map of water ice that could be just an inch beneath the dusty surface.

Ahead of any manned mission, robots have been scoping out Mars for years. Rovers have investigated the surface for signs of past life and evidence of water, while orbiters looping around Mars image and map the planet.

Data from NASA's Mars Reconnaissance Orbiter and the Mars Odyssey Orbiter have also been able to detect the signature of water ice beneath the surface.

"You wouldn't need a backhoe to dig up this ice. You could use a shovel," said Sylvain Piqueux, study author at NASA's Jet Propulsion Laboratory. "We're continuing to collect data on buried ice on Mars, zeroing in on the best places for astronauts to land."

Once, Mars was a warm planet that could potentially support life and water on its surface. But something changed about 3.5 billion years ago and it lost most of its atmosphere. Only a thin one exists today, allowing gases like water vapor to escape. And if water were to be on the surface now, it would instantly evaporate.

But water exists on Mars in the form of ice beneath the surface, both at the poles and the planet's mid-latitudes. The polar ice is the most well-known because the orbiters have imaged it. Meteors even helped increase understanding of the polar ice because they impact it, allowing the orbiter to take pictures of the disturbed ice.

NASA's Phoenix Lander was even able to scrape and sample the polar ice to confirm that it was water ice in 2008.

Both orbiters have instruments on board that are sensitive to heat, which is relevant to subsurface ice because it changes surface temperatures on Mars. The researchers also used the Odyssey orbiter's Gamma Ray Spectrometer to gather data that helped map areas where water ice could be found.

In addition to the water ice they already knew about at the poles and equatorial region, the data also revealed areas where water ice may be just below the surface.

Much like the moon, there are parts of Mars that would make the already freezing planet inhospitable to astronauts -- like the poles. Factors like temperature and sunlight exposure have to be considered.

That makes the northern and southern parts of the equatorial region appealing. The northern hemisphere is also better suited as a landing spot for a manned mission because the elevation is more manageable and there is more atmosphere to help slow the lander.

The researchers want to learn more about the subsurface ice and if it varies across the Martian seasons.

"The more we look for near-surface ice, the more we find," said Mars Reconnaissance Orbiter Deputy Project Scientist Leslie Tamppari. "Observing Mars with multiple spacecraft over the course of years continues to provide us with new ways of discovering this ice."