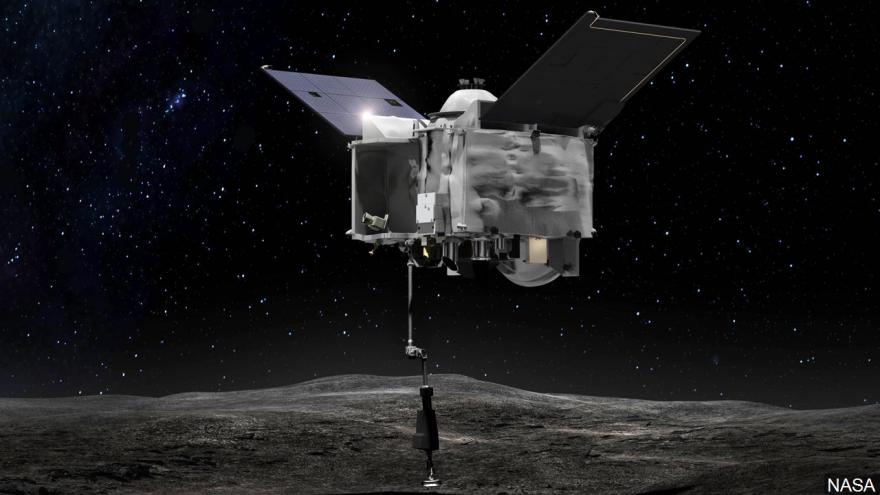 (CNN) -- NASA's first asteroid sample return mission, OSIRIS-REx, reached the asteroid Bennu only a week ago, but it's already learning more about this time capsule from the early solar system.

OSIRIS-REx, which stands for Origins, Spectral Interpretation, Resource Identification, Security-Regolith Explorer, has found water within the clays on Bennu.

Bennu was worth the two-year wait to reach it.

As OSIRIS-REx traveled 1.4 million miles from Earth and approached Bennu, three of its instruments were pointed toward the asteroid to make scientific observations between mid-August and early December.

Two spectrometers on the spacecraft, OVIRS and OTES, discovered hydroxls, or molecules of oxygen and hydrogen atoms bonded together. The mission scientists believe that these hydroxls exist across the asteroid, locked in clay minerals.

This means at some point over its lifetime, Bennu interacted with water -- although it's too small to host water itself. But Bennu was probably once part of a larger asteroid, and the liquid water would have been present on this "parent" body.

"The presence of hydrated minerals across the asteroid confirms that Bennu, a remnant from early in the formation of the solar system, is an excellent specimen for the OSIRIS-REx mission to study the composition of primitive volatiles and organics," said Amy Simon, OVIRS deputy instrument scientist at NASA's Goddard Space Flight Center. "When samples of this material are returned by the mission to Earth in 2023, scientists will receive a treasure trove of new information about the history and evolution of our solar system."

The mission scientists were encouraged to learn that they were also accurate in predicting and modeling Bennu's actual shape, including diameter, rotation rate and inclination, almost exactly.

But now that OSIRIS-REx is up close and personal with Bennu, it has found the asteroid's surface more rocky than expected, with more boulders. This means the mission scientists will need to make more observations at closer range to ensure from where a sample can be taken from the surface in 2020.

And there's a large boulder near the south pole of the asteroid, 164 feet high and 180 feet wide.

But this new information poses no insurmountable threat.

"Our initial data show that the team picked the right asteroid as the target of the OSIRIS-REx mission. We have not discovered any insurmountable issues at Bennu so far," said Dante Lauretta, OSIRIS-REx principal investigator at the University of Arizona, Tucson. "The spacecraft is healthy, and the science instruments are working better than required. It is time now for our adventure to begin."

OSIRIS-REx will continue to survey the asteroid by flying by its north pole, equator and south pole, sometimes as close as 4.4 miles away, to determine mass. This will help researchers determine when to put OSIRIS-REx into orbit, as well as understanding its structure and composition.

It will go into orbit December 31 and orbit until mid-February before another series of surveying flybys.

Bennu is relatively close to Earth, and its orbit even crosses that of our planet, making a close approach every six years. Though small asteroids can rotate very quickly, Bennu has a diameter just a bit bigger than the height of the Empire State Building and rotates relatively slowly, each 4.3 hours. This means OSIRIS-REx can match its velocity and touch down briefly.

The sample from Bennu, a near-Earth asteroid, could help scientists understand not only more about asteroids that could impact Earth but about how planets formed and life began.