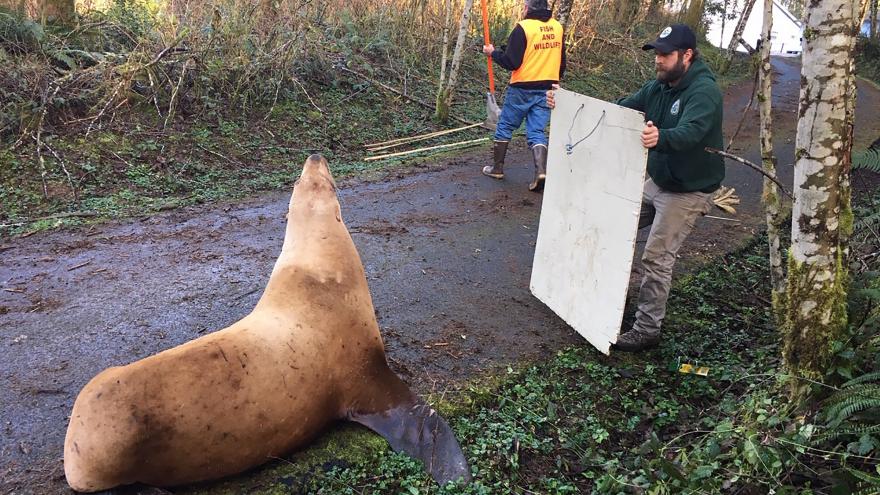 The sea lion roamed residential areas of Cowlitz County before being transported back to the Columbia River. Credit: Washington Department of Fish and Wildlife
By Amanda Jackson, CNN

The massive mammal was spotted in Cowlitz County, a few miles from a water source big enough for it, according to the Washington Department of Fish and Wildlife (WDFW).

"While it isn't uncommon for sea lions to be in the Cowlitz River this time of year with all the smelt, it was quickly determined this Steller sea lion, which are native to Washington, had taken several wrong turns," Becky Bennett with WDFW told CNN.

Those turns eventually led the sea lion to a wooded area typically populated by deer and elk and miles away from a place to swim, Bennett said.

The sea lion was first spotted by state wildlife officers Saturday night but with limited resources they had to wait until the next day to arrange transportation. The sea lion had other plans, though.

It kept venturing further and further inland overnight and was spotted sitting on the road at times and even in someone's driveway. Cowlitz County Sheriff's Sgt. Corey Huffine snapped a quick selfie with the "unexpected road hazard" and the department shared it on Facebook.

Multiple agencies, including the Cowlitz County Sheriff, Cowlitz County Humane Society, WDFW and Oregon Department of Fish and Wildlife, banned together to help trap the sea lion and transport it back to the Columbia River, according to the WDFW.

"Our wayward sea lion has been safely transported back to the Columbia River," the sheriff's office posted with several images of the rescue.

Wildlife officials said the sea lion's health was checked before it was released and it swam away without incident.