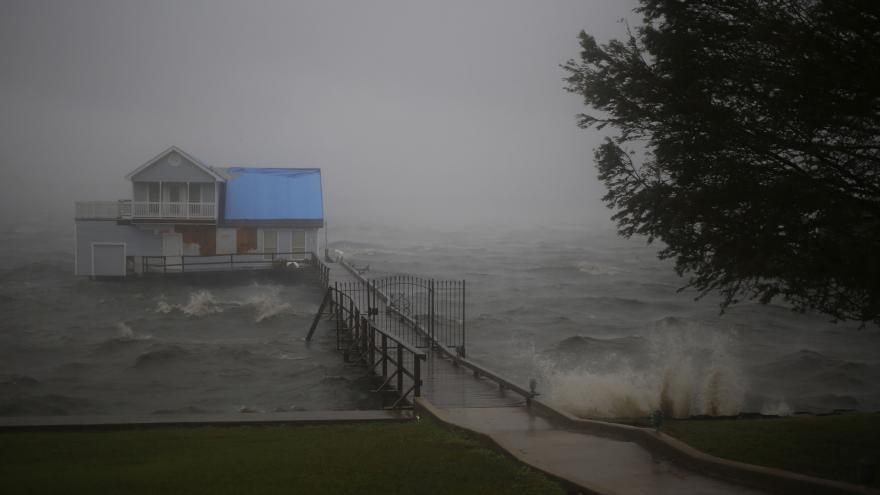 (CNN) -- About 3 million people were under flood and flash flood watches on Saturday across parts of the Mississippi and Tennessee river valleys as the remnants of Hurricane Delta continued to drench the Southeast.

Delta, now weakened to a post-tropical cyclone, dropped more than 1 foot of rain in Louisiana and its powerful winds pounded communities already ravaged by Hurricane Laura weeks ago. In its wake, it left more than 615,000 homes and businesses along the Gulf Coast without power as of Saturday afternoon,according to poweroutage.us.

Flash flood emergencies were issued following the heavy rain, with parts of southwest Louisiana receiving up to 17 inches of water.

"This was a very big storm," Louisiana Gov. John Bel Edwards told reporters Saturday before touring the hardest areas in the southwestern part of the state. "Even if it wasn't quite as powerful as Hurricane Laura it was much bigger... Obviously this was a very serious, very large and powerful storm that produced significant amounts of damage."

No fatalities were reported.

Edwards said more than 3,000 National Guardsmen were supporting emergency operations. More than 9,400 Louisianans were in shelters, including 935 from Delta. Edwards said 25% of utility customers in the state had no power.

Delta has left a trail of "hazards like flooded roads, downed power lines and displaced wildlife" across the state, Edwards said via Twitter. He urged residents to remain vigilant.

In Calcasieu Parish, on the southwestern border of the state, downed power lines, trees, flooding and debris had left several roads impassable, the Calcasieu Sheriff's Office said in a Facebook post. Multiple wrecks forced the closure of the Interstate 10 Bridge in both directions.

Abandoned vehicles and a boat blocked some residential streets in the parish, according to the sheriff's post.

Lake Charles Mayor Nic Hunter, who rode out the storm in a downtown building, told CNN Saturday that Delta, while lower in strength than Laura, had led to more flooding.

For the rest of the southern Mississippi River Valley into the Tennessee Valley, heavy rain and flooding remains the main concern through Saturday night. Parts of the Southeast could see rainfall amounts of more than eight inches before the weekend is over.

In Texas, the utility Entergy Texas said via Twitter that it could five days to a week to restore power to customers along the southeast border, where Poweroutage.us. reported more than 87,000 outages Saturday afternoon.

In Georgia, where forecasters had anticipated tornadoes, a person suffered minor injuries when a suspected tornado touched down in Covington, a town of 14,000 about 35 miles east of Atlanta.

A homeless shelter known as the Rainbow Shelter was damaged, leaving a person injured and up to 30 people displaced, Jody Nolan, the city's emergency management director, told CNN.

The National Weather Service had warned that tornadoes were possible through parts of Alabama, the Florida Panhandle and western Georgia through Saturday night. The weather service issued multiple tornado warnings through Saturday evening for parts of Georgia.

The weather service had issued a tornado watch until 9 p.m. that includes metro Atlanta and portions of western Georgia, eastern Alabama and the Florida panhandle. The watch covered nearly 3 million people.

Storms that could produce severe weather were developing Saturday afternoon and evening from the remnants of Delta.

Delta was expected to weaken into a remnant low pressure area on Sunday.

A double whammy for southwest Louisiana

"Our primary concern is always public safety and human life," he said. "And that's why we were so forceful in encouraging people with our message to evacuate for Delta."

Hunter said more people evacuated for Delta than for Laura.

Highways out of Lake Charles were jam-packed as people evacuated ahead of the storm -- and another 7,000, according to Hunter's estimate, were still displaced since Laura.

"But let me tell you, we're not sitting on our hands," Hunter said Saturday. "Already we're picking up the pieces. But we have quite a road ahead of us. There's a lot of homes that were damaged from Laura and now it's just adding insult to injury with what happened with Delta. So we have a long road of recovery ahead of us."

The mayor praised first responders who were conducting search and rescue operations as soon as winds died down as "heroes" and "angels among us."

About 10 miles west in Sulphur, Louisiana, one resident posted images of flooded streets and warned of fallen trees as well as debris that had "been strewn by the wind" and were now underwater.

Hurricane Delta is the 25th named storm of the 2020 Atlantic hurricane season.

It first hit Mexico's Yucatan Peninsula Wednesday, bringing with it flooding and downed power lines before making its way to the US coast.

With winds nearing 100 mph, the storm made landfall Friday evening near Creole, Louisiana, just miles away from where the deadly Hurricane Laura slammed coastal communities weeks ago.