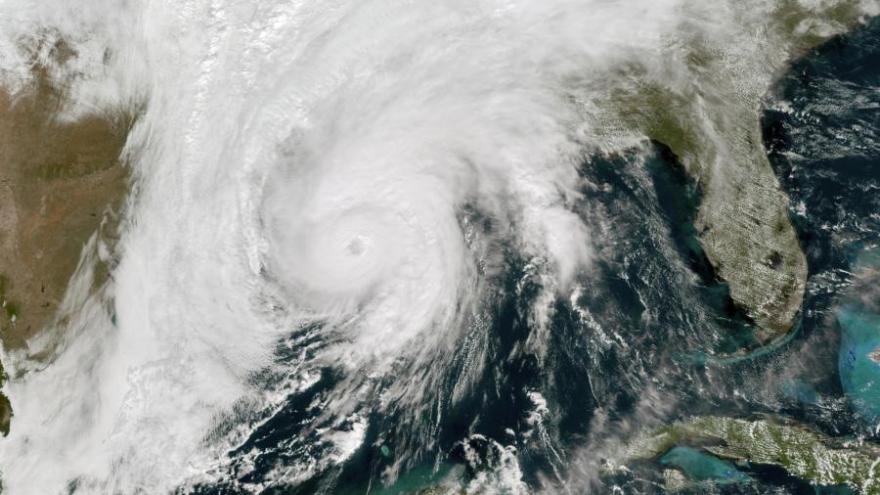 Zeta is the fifth named storm to strike Louisiana this season.

(CNN) -- Big storms have been ragin' in Cajun country at a record clip.

Hurricane Zeta slammed into Louisiana Wednesday as a Category 2 storm, becoming the fifth named storm to make landfall in the state this hurricane season -- the most ever for the Pelican State.

Zeta killed at least one person in Louisiana, and left hundreds of thousands of people without power.

The state still was recovering from the previous four storms -- with thousands of people still displaced from their damaged homes.

As Zeta approached this week, about 3,600 people still were displaced from Laura and Delta, Louisiana Gov. John Bel Edwards said.

Most of those evacuees were from Laura, and were spread among six hotels in New Orleans, the governor's office said.

Billy Ewing, 71, has been living in hotels in New Orleans since Laura damaged his Lake Charles apartment. Ewing uses a wheelchair and said the trauma of being displaced has changed him.

Laura was especially destructive, leaving more than 15 people dead in Louisiana and neighboring Texas and destroying parts of the power grid.

Coming 15 years after Hurricane Katrina devastated the state, Laura made landfall as the strongest hurricane by wind speed to hit the state since 1856, with winds over 150 mph.

Communities including Lake Charles, some 35 miles from the coast, were littered with debris. Across the city, roofs and walls were damaged, trees were snapped, twisted and broken; steel poles and lampposts were bent; street signs were torn from the ground.

Laura temporarily knocked out most of the water service in Lake Charles.

The damage was so extensive that some infrastructure needs to be rebuilt from scratch, Entergy, a power company that serves Louisiana and Texas, said in late August.

Laura was followed earlier this month by Hurricane Delta, which made landfall in Louisiana as a Category 2 hurricane.

It knocked out power to thousands of customers in Louisiana, Texas and Mississippi, and spawned at least 10 reports of tornadoes from the Gulf Coast to the Carolinas, including two in north and central Georgia that injured two people.

But as the storm moved away from Louisiana, it left parts of the southwestern corner of the state under up to 17 inches of rain. Roads were flooded, power lines were downed and more than a hundred roads and 35 bridges were closed, according to Gov. Edwards.

"Even if it wasn't quite as powerful as Hurricane Laura, it was much bigger," Gov. Edwards said at the time, adding the storm "produced significant amounts of damage."

"There's a lot of homes that were damaged from Laura, and now it's just adding insult to injury," the governor said.

At least 1 dead from Zeta in Orleans Parish

New Orleans Mayor LaToya Cantrell said this week that the city stood "ready and prepared and wanting to, again, encourage our people to not have fatigue as relates to being prepared."

The city became the first to record a death from Zeta, with the Orleans Parish coroner confirming a 55-year-old man was electrocuted by a downed power line, according to the Louisiana governor's office.

"They have been on the outskirts of several storms, but not had a direct hit yet this year," he said. "On top of that, this storm is hauling, so there hasn't been a ton of time to prepare.

"Recent storms had a lot of buildup, spending days over the Gulf," Miller said. "Because of this, I expect this storm will likely catch many by surprise."

Zeta is the 27th storm of the Atlantic hurricane season, one shy of tying the record for the most storms in a season. There were 28 storms in 2005, including 15 hurricanes.