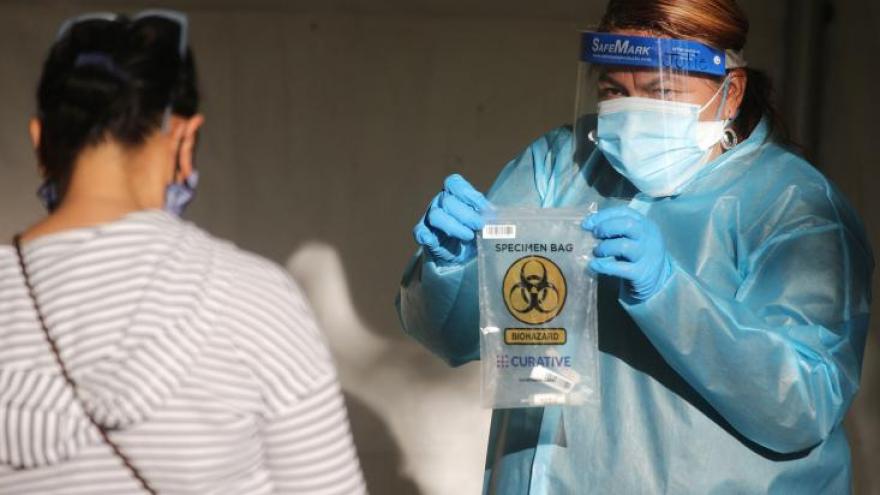 (CNN) -- The White House coronavirus task force offered some direct recommendations to states in its weekly report after telling officials that "the Covid risk to all Americans is at a historic high."

CNN has obtained weekly reports from dozens of states that warn the US is "in a very dangerous place" in the pandemic as the nation sees record-high daily death counts and hospitalizations with the fear of additional surge after the Thanksgiving holiday.

That fear is so great that the task force this week has told public health officials to take matters into their own hands if policies aren't stringent enough to match the moment.

"If state and local policies do not reflect the seriousness of the current situation, all public health officials must alert the state population directly," reports sent to each state dated November 29 said.

They also outlined behavior guidelines depending on age or risk factors, such as those older than 65 getting groceries and medicine delivered, because the risk is so high.

"If you are under 40, you need to assume you became infected during the Thanksgiving period if you gathered beyond your immediate household. Most likely, you will not have symptoms; however, you are dangerous to others and you must isolate away from anyone at increased risk for severe disease and get tested immediately," the reports said.

The task force expressed concerns and issued tailored recommendations to each state as they have since June.

North Dakota is again the state with the most new cases per population, followed by South Dakota, then Wyoming, New Mexico, Minnesota, Iowa, Nebraska, Indiana, Kansas and Montana in the top 10.

Idaho is the state with the highest test positivity rate, which can foreshadow surging cases and then hospitalizations and deaths, followed by Montana, then Kansas, Oklahoma, Missouri, Utah, Iowa, Nebraska, Nevada and Indiana in the top 10.

The task force's comments calling on public health officials to directly alert the state's population if policy doesn't reflect the seriousness of the situation could have been directed at states like Missouri and Tennessee, where there are still no statewide mask mandates.

"The depth of viral spread across Missouri remains significant and without public health orders in place compelling Missourians to act differently, the spread will remain unyielding with significant impact on the healthcare system," the task force warned both states.

There are "extraordinarily high rates of cases and test positivity in an ongoing health emergency" in Wisconsin, the task force said, though it noted there had been a "significant decline" in new cases from the previous week. The report warned of "minimal reserve capacity in the health care system" there. It also suggested that clinical facilities "have expansion and contingency plans."

The task force called for "more intensive restrictions" in Wyoming, including increasing distancing through capacity restrictions at restaurants and bars, as well as "enforceable requirements for face masks and social distancing." Citizens who have been tested, the report said, should be given "written and verbal education with instructions to isolate (and how to isolate) until results are returned and to continue isolation if results are positive."

The Idaho report also suggested that "further restrictions ... are warranted to reduce hospitalizations and deaths." There is no statewide mask mandate in Idaho.

New Mexico, the state with the fourth highest new case rate in the country, has seen stability in new cases and decreasing test positivity rates over the last week, which, the task force said, could mean the state is "achieving a high plateau and improving if a new surge doesn't occur post-Thanksgiving."

There may also be a plateau in Arkansas, the state's report said, but warned that "the percent of nursing homes with at least one positive staff member and positive residents is increasing, indicating virus spread is still broad."

Hospitalizations, the report predicted, "will continue in the coming weeks."

The report for Arkansas also noted that testing trends "should be cautiously interpreted this week given the number of individuals getting tested may have decreased due to Thanksgiving."

In Delaware and Washington, the task force said it shared leaders' concern "that the current situation is critical and that the population and health care system must do everything possible to prepare for and limit a post-Thanksgiving resurgence." That, the report said, includes "urgently needed" improved public observance of social distancing to "limit overrunning hospital capacity and additional preventable deaths," as well as limiting travel over the holiday season.

In California, the state's report "saw a further major increase in reported cases, a large increase in hospitalizations, and a continued increase in deaths."

"The current situation is critical after more than a month of continuing, rapid increases in cases and hospitalizations; the population and health care system must do everything possible to prepare for and limit a post-Thanksgiving resurgence," the report said.

The task force had similar concerns for Minnesota, where "new hospitalizations fell slightly last week but remain extremely high," and "large numbers of health care workers are unable to work due to infection with or exposure to" the virus.

The Utah report praised the state for expanding testing, which it called a "critical achievement," and its face mask requirement, which it called "highly commendable," adding that the state should launch a "holiday public messaging campaign."

In Pennsylvania, where cases are also increasing, the task force expressed concern, "especially given local hospital shortages and further increases anticipated over the upcoming holidays."

The task force said Pennsylvania media platforms "should be fully saturated with public health messaging on the risks of social gatherings, the clear recommendation to avoid such gatherings, the critical need for face coverings and social distancing, and instructions on how to report non-compliance of local businesses and organizations."

Public health messaging, the report said, should employ "champions from different political and cultural belief systems to convey the importance of mitigation efforts."

Maryland, its report said, is "showing signs of a continued viral surge," calling for some short-term mitigation measures, including restrictions on indoor dining.

The task force shared concerns with Vermont about spread in the state, though suggested that "the modest proportion of Vermonters who, in a national survey, indicated plans to spend Thanksgiving with other households is encouraging."

"Given the need to protect the islands from the intensified epidemic on (the continental United States), the recently tightened requirements for tourists are warranted and should continue through the tourist season," the report said.

Hospital admissions in Alabama, its report said, "remain elevated at an increased level."

The reports also noted that universities should aggressively test students returning to campus after the Thanksgiving holiday, and make plans for weekly testing after winter break.