What happens next? The plan for Prince Philip's mourning period and funeral 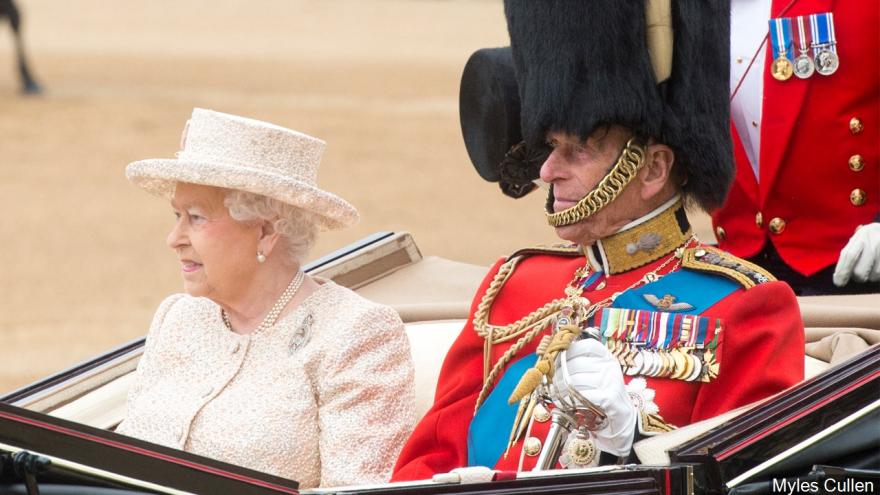 (CNN) -- The death of Prince Philip, the husband of Queen Elizabeth II, on Friday has set in motion a carefully orchestrated, days-long event that will culminate with his funeral.

Plans for a major royal death are made years in advance, though details are kept fiercely private and the coronavirus restrictions currently in place across the United Kingdom mean some aspects of the strategy will have to be altered.

CNN understands that the Queen must sign off on any proposals and it's not known whether this has already happened. It is also unclear how much of a hand Philip himself played in the plans for his funeral.

But some notable parts of the arrangements for Philip's death -- understood to be codenamed "Forth Bridge" by government ministers, royal staff and media partners -- have been announced, and will take place as follows.

Philip's remains are at Windsor Castle, the royal residence just west of London, where he and the Queen have been living in recent months.

Philip returned to the castle in mid-March for his final weeks, after being discharged from a hospital in London following heart surgery.

His body will lie in rest within the castle, ahead of his funeral at St. George's Chapel, also on site. That arrangement is in line with royal custom and with Philip's wishes, according to the College of Arms, the royal corporation that plays a key role in planning.

A major royal death prompts expressions of mourning from many Britons. The deaths of Princess Diana and the Queen Mother in recent decades saw thousands fill streets across the country to commemorate their lives.

On Friday, Britain's Prime Minister, Boris Johnson, said: "We mourn today, with Her Majesty the Queen. We offer our condolences to her, and to all her family, and we give thanks, as a nation and a Kingdom, for the extraordinary life and work of Prince Philip, Duke of Edinburgh."

Flags on royal buildings will be flown at half-staff until 8 a.m. (3 a.m. ET) on the day following Philip's funeral. That includes all of the UK's "official" flags -- the Union Jack, the flags of England, Scotland, Wales and Northern Ireland, plus ensigns and ships' colors.

Flags above most governmental buildings, including 10 Downing Street, have also been lowered.

Public tributes were included in the plans for Philip's death, though they are likely to be disrupted by coronavirus-related restrictions on gatherings. Currently, outdoor gatherings of more than six people or two households are banned in England, with similar restrictions elsewhere in the UK.

On Friday, the College of Arms "regretfully requested that members of the public do not attempt to attend or participate in any of the events that make up the funeral."

Similar advice was given by the government. "Although this is an extraordinarily difficult time for many, we are asking the public not to gather at Royal Residences, and continue to follow public health advice particularly on avoiding meeting in large groups and on minimising travel," a Cabinet Office spokesperson said in a statement.

"We are supporting the Royal Household in asking that floral tributes should not be laid at Royal Residences at this time," the spokesperson added.

Gun salutes will be fired across the UK at noon on Saturday, the UK Ministry of Defence wrote in a statement. "Across the United Kingdom, in Gibraltar and on HM Ships at sea, saluting batteries will fire 41 rounds at one round every minute for 40 minutes," it wrote.

"The public are encouraged to observe the gun salutes from home, they will take place behind closed doors but broadcast online and on television," the statement added.

The current coronavirus situation threatens to make the duke's funeral unrecognizable from those held for most senior royals before.

Even a so-called 'ceremonial' funeral through would normally be televised and would feature some public elements, but any military ceremonies or processions are likely to take place behind castle walls, to discourage members of the public from gathering.

Usually, such a funeral would be attended by heads of state from around the world.

But only up to 30 people are currently allowed to attend a funeral in England, with social distancing measures in place. This will not change on Monday, despite the country entering its second stage of "unlocking," so Philip's funeral is likely to involve just family members and his closest friends and aides.