What 'state of emergency' means for coronavirus 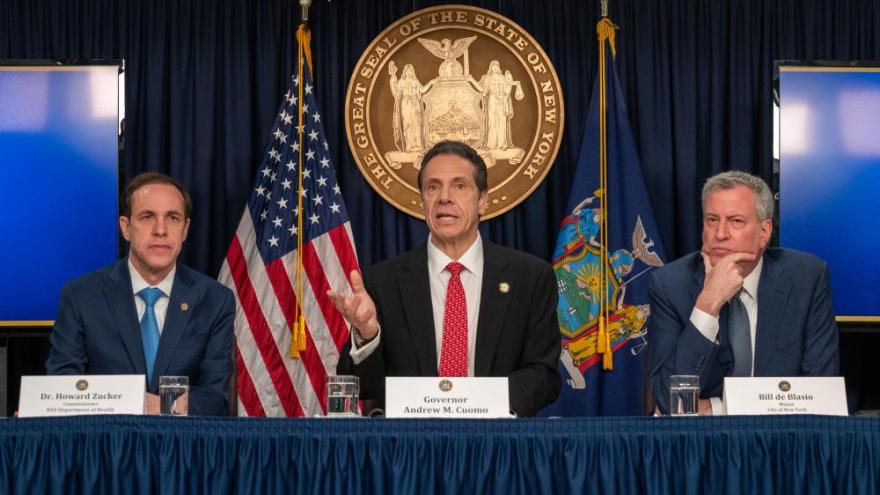 (CNN) -- You hear it any time there is a natural disaster like a hurricane, an earthquake or now a viral pandemic: the governor has "declared a state of emergency."

Multiple states have already made such declarations with regard to coronavirus.

It sounds alarming and is reserved for serious situations, but it has important technical ramifications, easing a city or state's access to federal aid. Congress appropriated more than $8 billion to deal with coronavirus and already it appears that will not be enough.

A declaration also focuses the entire state government on dealing with the emergency, and, hopefully, makes citizens sit up and pay a little more attention.

Senate Minority Leader Chuck Schumer and other senators are preparing a letter that will ask President Donald Trump to issue an emergency declaration for the coronavirus pandemic which would free up to $40 billion from the Disaster Relief Fund to assist local state government in their response to the virus, an aide for Schumer told CNN Wednesday.

What a 'state of emergency' declaration does

But money and messaging are not the only reason a governor makes such a declaration. It also allows governors to sidestep certain federal and state laws.

An example: When New York Gov. Andrew Cuomo declared a state of emergency with regard to coronavirus on March 7, it temporarily freed up the state from complying with everything from federal transportation laws to meeting quorum requirements for public meetings of health officials.

The state of emergency in New York is in effect until September, but Cuomo also temporarily suspended or modified more than 20 state laws or regulations until at least April 6.

For instance, the declaration suspended certain regulations to allow state agencies and school districts to move around competitive bidding processes to do things like buy cleaning supplies. It temporarily changed licensing regulations that usually protect who can conduct a test for something like coronavirus. It gave the state health commissioner new powers to alter the state's sanitary code. Read the whole New York declaration here.

California's declaration, dated March 4, is here. Gov. Gavin Newsom similarly waived many state regulations. One will make it easier for out-of-state doctors and nurses to provide assistance in the state. Another makes it easier for local governments to make their own emergency proclamations within the state.

And that's an important point.

Most emergency responses in the US are not meant to be a top-down thing, but rather bottom-up. It's local authorities who are the first line of defense. They filter up to governors and state governments, who in turn filter up to the national government, which coordinates the largest efforts. For the large-scale federal plans, check out the Department of Homeland Security's National Response Framework.

Quarantines and school closing decisions are probably going to be made at the local, not the national, level.

But the federal government works along with states. Health and Human Services Secretary Alex Azar declared a public health emergency back on January 31. That declaration started the process of making it easier for states to redirect personnel whose salaries might be paid by the federal government.

Previously, the Trump administration declared public health emergencies for the national opioid crisis and, in a more targeted way, for hurricanes and earthquakes that struck Puerto Rico, hurricanes in the Southeast and wildfires out West.

Every state has their own process and rules. All 50 states can declare an emergency or disaster, but only 34 have specific powers to declare public health emergencies.

Usually, the declaration is made by the state's governor through an executive order issued by the governor.

Many governors may also have the power to isolate and quarantine.

"This is a top issue for governors and as a result the National Governors Association is holding frequent briefings with state officials to share ideas and best practices," said Eric Wohlschlegel of the group, which tries to help governors plan and respond.

How a pandemic emergency is different from an earthquake or hurricane

Pandemic flu is different than an earthquake or hurricane since it travels, so national coordination is even more important. The DHS and the Centers for Disease Control and Prevention set national policy -- read the CDC's 52-page pandemic flu plan, last updated in 2017, here. But it is largely up to states, in cases like this, to implement it.

Both federal and state governments think a lot of time thinking about disaster recovery.

Back in 2011, President Barack Obama signed a special policy directive that created a National Preparedness System to deal with everything from terror attack to pandemic flu outbreak, although the word "pandemic" appears in that document only twice. From that perspective, states and the federal government are learning as they go along.