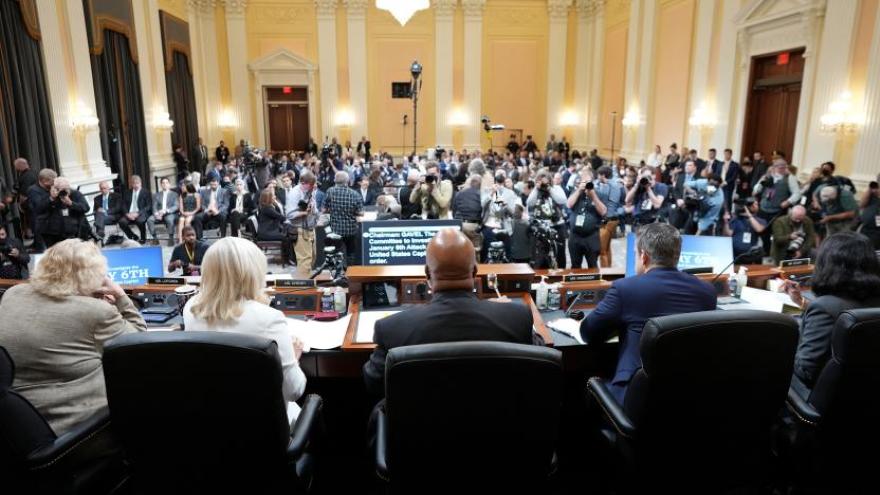 The January 6 committee plans to show at its hearing on July 12 how right-wing extremist groups including the Proud Boys and Oath Keepers prepared to attack the US Capitol in the days leading up to January 6, 2021.

(CNN) -- The January 6 committee plans to show at its hearing Tuesday how right-wing extremist groups including the Proud Boys and Oath Keepers prepared to attack the US Capitol in the days leading up to January 6, 2021 -- and the groups' ties to Donald Trump associates, including Roger Stone and Michael Flynn, according to committee aides.

The latest January 6 hearing -- set to begin at 1 p.m. ET and the panel's seventh since it began last month -- will focus on the extremist groups and their preparations ahead of January 6, 2021. Committee aides said the hearing will also scrutinize how Trump's actions fueled the groups, such as his December 2020 tweet telling his supporters descend on Washington on January 6.

The hearing is also expected to be the first chance for the committee to play clips of its closed-door interview last week with former Trump White House counsel Pat Cipollone.

Committee aides said that the hearing would connect Trump's multiple pressure campaigns to try to overturn his 2020 election loss to Joe Biden to the violence at the Capitol on January 6, which was led by the extremist groups that will be a focus of the hearing.

One of the witnesses testifying Tuesday is expected to be Jason Van Tatenhove, a former spokesperson and self-described "propagandist" for the Oath Keepers, CNN reported on Sunday. Stephen Ayres, one of the many people who descended on Capitol Hill on January 6 and was later accused and pleaded guilty to entering the Capitol illegally, is also scheduled to testify at Tuesday's hearing, a source familiar with the committee's plans confirmed to CNN on Monday night.

While there had been discussions that the committee would hold a second hearing later this week, aides confirmed that the panel's only public session would take place on Tuesday.

Here are the key things to watch for during Tuesday's hearing:

Hearing to scrutinize actions of GOP members of Congress

Committee aides said that the committee would focus once again Tuesday on the role that Republican members of Congress played in the lead-up to January 6.

The aides said that the hearing would examine their involvement in Trump's pressure campaign, particularly against then-Vice President Mike Pence. After Trump publicly and privately pushed Pence to help him overturn the election on January 6, rioters called for Pence's hanging as they stormed the Capitol.

Aides said that the hearing would further explore how members of Congress helped Trump in the days leading up to January 6 with "last-ditch efforts to overturn the election result and stop the transfer of power."

In previous hearings, committee members have focused on numerous roles their GOP colleagues played aiding Trump's efforts to overturn the election, including efforts to help a Trump loyalist gain power inside the Justice Department. The committee also provided emails and testimony showing multiple Republican members of Congress sought pardons from Trump after January 6.

After the committee's first hearing last month, the panel's chairman, Democratic Rep. Bennie Thompson of Mississippi, told CNN that the hearings would describe conversations between extremist groups and members of Trump's orbit.

The Justice Department's cases against members of the Proud Boys and Oath Keepers have shown that both groups stuck close to right-wing VIPs, especially those they believed they were providing volunteer "security" for on January 5 and 6, 2021.

That includes Joshua James, an Oath Keeper who has pleaded guilty to seditious conspiracy who chauffeured Stone. Stone also has close ties to prominent members of the Proud Boys, going back years.

In addition to the extremist groups, the committee said Tuesday's hearing would focus on the QAnon conspiracy theory.

Inside the White House, the committee featured testimony late last month from Cassidy Hutchinson, the former aide to then-White House chief of staff Mark Meadows, who said she heard about both groups in the lead-up to January 6.

"I recall hearing the word 'Oath Keeper' and hearing the word 'Proud Boys' closer to the planning of the January 6 rally, when (Trump lawyer Rudy) Giuliani would be around," Hutchinson said in a video deposition the committee played during its hearing where she testified.

At the committee's earlier hearings, Republican Rep. Liz Cheney of Wyoming, the committee's vice chairwoman, called out Cipollone for not yet appearing for a deposition before the panel.

After receiving a subpoena, Cipollone did just that on Friday -- and his testimony is expected to become part of the committee's public hearings on Tuesday, as members of the committee predicted over the weekend.

"Yes, we will have some excerpts of Mr. Cipollone's testimony," Democratic Rep. Zoe Lofgren of California, another member of the committee, said on CNN's "State of the Union" on Sunday. "He was able to provide information on basically all of the critical issues that we're looking at."

Cipollone was asked about a meeting that took place on December 18, 2020, in the White House, where Trump welcomed a group of the most extreme election deniers to the West Wing, to plot a course to attempt to stand in the way of Joe Biden's certification as President of the United States.

As CNN previously reported, the meeting included Flynn and his lawyer Sidney Powell, two people familiar with the matter said, describing a session that began as an impromptu gathering but devolved and eventually broke out into screaming matches at certain points as some of Trump's aides pushed back on Powell and Flynn's more outrageous suggestions about overturning the election.

The committee aides also said that meeting on December 18 is of high interest to the panel's investigation. They pointed to a tweet Trump sent the following day, encouraging his supporters to descend on Washington as a key moment that ultimately led to the violence on Capitol Hill on January 6.

Another key moment committee said Tuesday's hearing would focus on is a now-infamous Oval Office meeting in mid-December 2020 where Flynn and Trump's former attorney Sidney Powell advocated for seizing voting machines to try to prove allegations of fraud.

The meeting devolved into screaming matches as some of the President's advisers pushed back on various proposals, including invoking martial law and naming Powell special counsel to investigate voter fraud claims, CNN reported at the time.

CNN reported earlier this year that Trump's advisers drafted two versions of an executive order to seize voting machines -- one directing the Department of Defense to do so and another the Department of Homeland Security -- as part of the broader effort to undermine the 2020 election results.

Any such operation for the military or federal agents to seize voting equipment for political purposes would have been unprecedented in US history.

Among those White House aides who pushed back on the proposal and could shed new details on the meeting: Cipollone, as well as Meadows.

The committee has declined to say who will be testifying for Tuesday's hearing, leaving a bit of mystery ahead of the session.

CNN and others have reported that Van Tatenhove would be one of the witnesses, and he told Colorado TV station KDVR of his invitation last week.

While Van Tatenhove was never a member of Oath Keepers, he described himself as a former "employee" and said he has inside into the group's inner-workings.

"I did get a lot of inside access," Van Tatenhove told KDVR.

Committee aides would not say if other witnesses will be joining Van Tatenhove, raising concerns of security and potential harassment.

ABC News was first to report Ayres would join Van Tatenhove on Tuesday, but whether additional witnesses would be include remained a mystery as of Monday night.

Tuesday's hearing will be led by two Democrats on the panel: Reps. Stephanie Murphy of Florida and Jamie Raskin of Maryland. While the committee has held six hearings so far, Tuesday will be the first chance for both members to have a substantive role in the committee hearings, as the panel has divided up the topics for each hearing, limiting how many committee members have spoken.

One hearing this week, another likely next

The House select committee's schedule remains fluid. Committee aides confirmed that Tuesday's hearing was the only one the committee planned to hold this week, while saying that another hearing was likely to be held next week.

That hearing next week is likely to focus on what was happening inside the White House as the attack on the Capitol unfolded, which January 6 committee members have alleged was Trump's "dereliction of duty" when he failed to respond to the insurrection.

The committee had previously considered holding that hearing later this week, but aides said they needed to give members and investigators time to process the "new and important information" the panel received.

That doesn't mean that there won't be additional changes to the panel's plans, of course. Last month, the committee said it had planned to take a break from its hearings until July, only to turn around and hastily schedule a hearing for Hutchison to testify the day beforehand.