What to watch in the Amy Coney Barrett hearings 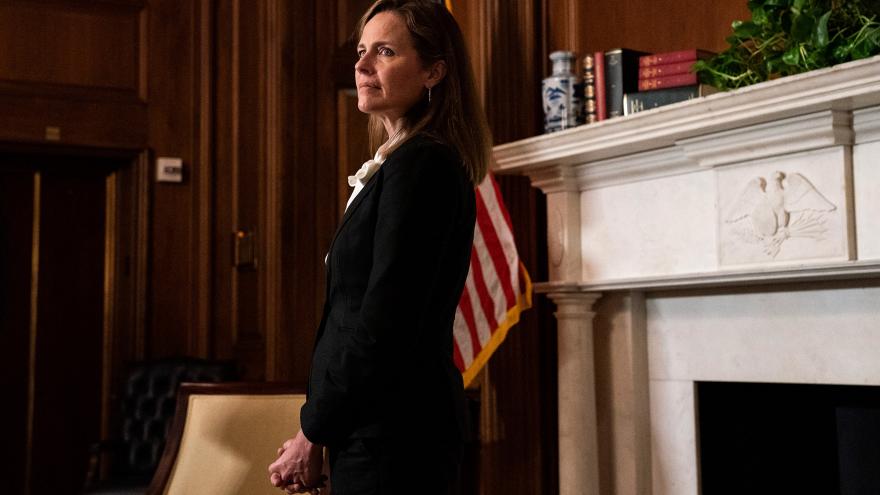 (CNN) -- Amy Coney Barrett's fast-track Supreme Court confirmation goes before the Senate Judiciary Committee Monday as the raucous fight over Barrett's nomination spills into public view for a week's worth of hearings.

The hearings represent Democrats' best chance to poke holes in Barrett's record and try to cast doubt on President Donald Trump's nominee in the minds of Republicans -- or if that's not possible, at least score political points on health care three weeks before the election. The stakes are high for a surprise confirmation fight following the death of Justice Ruth Bader Ginsburg that has the potential to shift the ideological makeup of the court for a generation, and the tensions are a powder keg on all sides.

But as the recent coronavirus outbreak from the White House shows -- which infected two members of the Judiciary Committee, throwing the confirmation process into doubt -- the rapid timeline Republicans have traced leaves little margin for error.

For Republicans, a smooth hearing will put Barrett on the glide path to be confirmed before Election Day over the fierce objections of Democrats, who charge the GOP is using a double standard after refusing to consider President Barack Obama's nominee in 2016.

Opening statements from senators and Barrett are scheduled for Monday, with lawmakers questioning Barrett on Tuesday and Wednesday. Outside witnesses for and against the nominee will testify Thursday.

Here's what to watch for during the hearings this week:

The potential for an October surprise

If the Senate voted on Barrett's nomination this week, she'd have the votes to be put on the Supreme Court. Republicans hold a 53-47 majority. While two Republicans, Sens. Susan Collins of Maine and Lisa Murkowski of Alaska, say they are opposed to confirming a Supreme Court nominee so close to an election, every other Republican appears to be lining up to support Barrett. No Democrats are considering backing her.

But that doesn't mean unforeseen surprises won't emerge in her nomination, whether it's from her background or out of the hearings this week.

The White House and Senate Republicans are rushing Barrett's nomination to get her over the finish line before Election Day, a timeline that leaves little wiggle room. As a result, the vetting process was accelerated -- and in some cases was incomplete.

CNN's KFile reported on Friday that Barrett failed to disclose two talks she gave in 2013 hosted by two anti-abortion student groups on paperwork provided to the Senate. After the story published, the Senate Judiciary Committee released a supplemental update to Barrett's committee questionnaire that included the lecture and seminar, as well as a paid advertisement she signed that criticized Roe v. Wade and reaffirmed support for Notre Dame's "commitment to the right to life."

The missing speeches aren't likely to change the mind of any Republicans. But it leaves open the possibility there's more that could come out -- both Republicans and Democrats still have the 2018 battle royal over Justice Brett Kavanaugh's confirmation seared in their memories.

Two of the Republicans on the Judiciary Committee, Thom Tillis of North Carolina and Mike Lee of Utah, tested positive for coronavirus after they attended Barrett's Rose Garden announcement at the end of last month, and a third Sen. Ron Johnson of Wisconsin, tested positive soon thereafter.

The trio of positives threw what appeared to be a smooth confirmation into doubt. Judiciary Chairman Lindsey Graham did not alter the hearing schedule, which begins this week and could have Barrett confirmed by the end of the month, although senators may attend Barrett's confirmation hearings virtually. Tillis said last week in a Fox News interview he expected to appear virtually on Monday and then in person when the question-and-answer sessions begin on Tuesday.

Still, the infections that spread through the White House and Republican circles -- and to Trump himself -- are a reminder that Republicans' timing could be upended if any additional senators test positive.

Graham, notably, would not take a coronavirus test before his Senate debate that was scheduled for Friday. The South Carolina Republican argued his opponent, Democrat James Harrison, was trying to change the rules. But Graham's critics noted that he did not want to test positive with this week's hearings looming -- as the chairman's absence would almost surely end the chance for a Senate confirmation vote before November 3.

Even if Democrats are fighting a losing battle to stop Barrett's confirmation, the public attention on the Supreme Court hearings gives them an opportunity to push a health care message that helped them win the House in 2018 -- and they hope will help take back the Senate and White House next month.

The Supreme Court will hear a challenge to the Affordable Care Act a week after the election in a case brought by Republican state attorneys general and the Trump administration, meaning Barrett could hear the case.

Democrats say the case threatens care for millions of Americans with pre-existing conditions, a popular protection included in the Affordable Care Act.

A CNN poll released earlier this month found that 57% of Americans surveyed now favor Obamacare (up from 50% in 2017), and that 61% do not want the Supreme Court to overturn it.

"Chief Justice Roberts pushed the Affordable Care Act beyond its plausible meaning to save the statute. He construed the penalty imposed on those without health insurance as a tax, which permitted him to sustain the statute as a valid exercise of the taxing power."

She continued, "Had he treated the payment as the statute did -- as a penalty -- he would have had to invalidate the statute as lying beyond Congress's commerce power."

While Trump has claimed he will protect pre-existing conditions, he has not put forward any plan to do so despite months of pledges that a health care plan is coming any day now.

Democrats are also likely to use the hearings to highlight the threat they say Barrett's nomination poses to abortion rights. Trump has pledged to nominate justices that would overturn Roe v. Wade, but when Democratic presidential nominee Biden argued that Barrett would take away abortion rights at last month's debate, Trump responded, "You don't know her view on Roe v. Wade."

Even if the Supreme Court doesn't overturn Roe, both her supporters and detractors alike say it's clear that her confirmation would cement a conservative majority on the Supreme Court to limit abortion access.

While Democrats are going to press Barrett on both health care and abortion from as many angles as they can think of, she's unlikely to say much about how she would rule on such cases, just as nominees before her have avoided doing.

When Barrett came before the Judiciary Committee during her 2017 confirmation to sit on a federal appeals court, the panel's top Democrat, Sen. Dianne Feinstein, said of Barrett, "the dogma lives loudly within you."

That statement has been resurfaced by Republicans and Democrats alike ahead of the confirmation hearings, and Republicans have been quick to attack Democrats for going after Barrett's Catholic faith.

Republicans have been hitting Democrats over criticism of Barrett's religion in the leadup to the hearings, including Vice President Mike Pence criticizing Sen. Kamala Harris, a Judiciary Committee member, at last week's vice presidential debate.

Democrats on the committee say they want to steer clear of questions about whether Barrett's devout Catholic faith will impact her views, focusing instead on issues they hope will resonate with voters.

Democrats are cognizant of the fact that the brawl over Kavanaugh's confirmation in the run-up to the 2018 midterms hurt several Senate Democrats in red states, and they want to avoid giving Republicans any wedge issues with control of the Senate up for grabs next month.

If Barrett is nominated to the Supreme Court before Election Day, it means she could be on the bench when the high court hears a potential case that decides the electoral fate of the president who nominated her.

Democrats have demanded that Barrett recuse herself from any election-related cases involving the presidency, given how close she was nominated to the 2020 election.

Trump has already linked the quick confirmation of Barrett to the potential for the Supreme Court to play a role in the 2020 election, which he has falsely claimed will be rigged or stolen from him.

"I think this will end up at the Supreme Court," Trump said of the election last month. "And I think it's very important that we have nine justices."

This week's hearings will give Democrats a chance to publicly seek a commitment from her not to involve herself in election disputes. But in the end, the question of recusal would be solely up to Barrett herself. And it's unlikely they will succeed.

"I specifically asked her to recuse herself," Sen. Chris Coons, a Delaware Democrat, said last week after speaking to Barrett. "She made no commitment on recusal."