What we know about the West Texas mass shooting 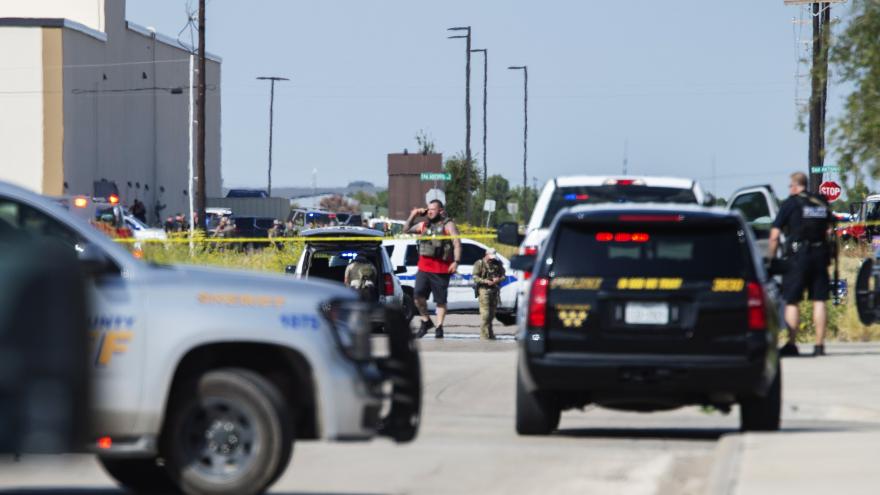 Here's what we know.

The rampage began at 3:13 p.m. (4:13 p.m. ET) when two Texas Department of Public Safety troopers tried to pull over a gold Honda heading westbound on Interstate 20 in Midland, according to authorities.

A DPS official said at a news conference the driver was stopped for a "simple traffic violation" for failure to signal for the required distance.

The driver grabbed a rifle and fired at the troopers' patrol car, wounding one of them, according to Lt. Elizabeth Carter of Texas DPS.

The shooter then headed west to Odessa, shooting randomly at residents and other motorists, according to Odessa Police Chief Michael Gerke.

At some point, Gerke said, the shooter abandoned his car and hijacked a USPS mail carrier's vehicle. He continued shooting at bystanders before making his way to a local movie theater.

Authorities were finally able to bring him to a standstill by orchestrating an intentional crash, according to bystander video and Midland County District Attorney Laura Nodolf.

The gunman was slammed by a police vehicle and spun into a group of cars in the movie theater's parking lot. At that point he was surrounded by authorities.

The shooter was ultimately killed.

During a Sunday news conference, Gerke said the investigation was ongoing and that authorities were still examining multiple crime scenes.

Authorities have not publicly identified the seven deceased victims, but Gerke said Sunday that they ranged in age from 15 to 57.

Among the dead is 29-year-old USPS mail carrier Mary Granados, according to her twin sister Rosie and a spokeswoman for the USPS Inspection Service.

Granados was nearing the end of her shift Saturday when she was killed. The two women were on the phone together, Rosie said, when she heard her sister scream.

"I tried calling her name and she wouldn't answer," Rosie said.

"She was a very beautiful person," she added. "She was very friendly and was always smiling."

Of the the 22 injured victims, one is a 17-month-old girl and three are law enforcement officers.

The girl is in satisfactory condition at the University Medical Center in Lubbock, hospital officials said.

Texas Gov. Greg Abbott said Sunday he had received a message from the girl's mother, who he said told him, "Toddlers are funny, because they can get shot but still want to run around and play."

Abbott said the woman told him her daughter will have surgery Monday to remove shrapnel from her chest.

The shooter has been identified as Seth Ator, 36, according to multiple federal and local law enforcement officials.

A LinkedIn account under Ator's name says he was a truck driver.

He was previously arrested in 2001 for criminal trespass and evading arrest, both of which are misdemeanors, according to public records. Adjudication was deferred, though the details of the case were not immediately available.

The FBI on Sunday executed a search warrant at a rural property in West Odessa believed to be connected to the alleged shooter, according to a law enforcement official.

Gerke didn't name the gunman at the press conference Sunday, saying, "I refuse to. I'm not going to give him any notoriety for what he did." He said officials would release his name later.

The shooter used an AR-type weapon in the shooting, according to Gerke. Authorities are still investigating how he obtained the firearm.

Initially, there were reports that there might have been two shooters, Gerke said Sunday, but that was because the shooter switched vehicles.

"We're now confident that there was just the one actor," he said.

Investigators do not believe there's any connection to domestic or international terrorism, FBI Special Agent in Charge Christopher Combs said, but authorities are still trying to understand why the shooter did what he did.

"There are no definitive answers as to motive or reasons at this point," Gerke said.