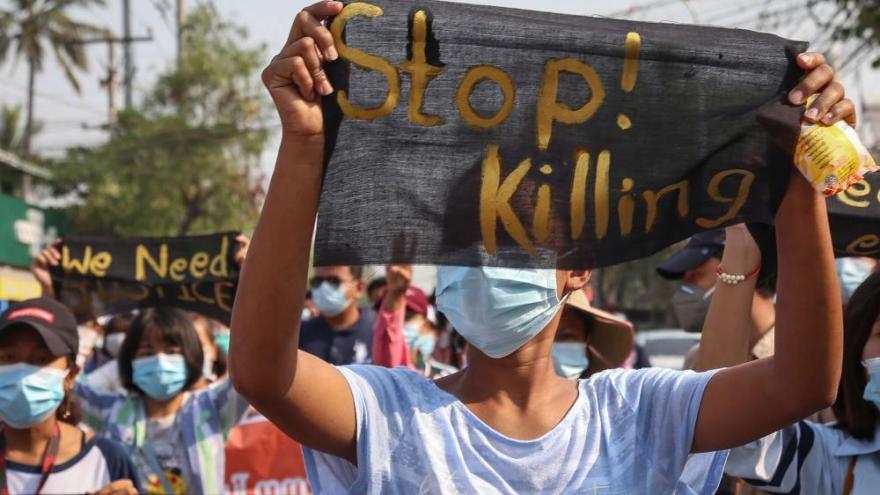 The US policy on the Myanmar military's crackdown on peaceful pro-democracy demonstrators has been bipartisan -- but that hasn't helped stop the conflict in the Southeast Asian nation. Demonstrators hold banners during an anti-military coup protest in Mandalay, Myanmar, 11 April 2021.

(CNN) -- The US policy on the Myanmar military's crackdown on peaceful pro-democracy demonstrators has been bipartisan -- but that hasn't helped stop the conflict in the Southeast Asian nation. At a time of rare bipartisan action, the Biden administration's position on Myanmar's violence won praise from Senate Minority Leader Mitch McConnell.

"Their instincts are good," the Kentucky Republican told Politico on Monday, after Biden reportedly consulted with the minority leader on the situation in Myanmar, which CNN has covered on the ground. The Biden administration has called for the country's military to end its crackdown on peaceful protests and has levied at least two rounds of sanctions. "Our ability to influence this from halfway around the world is limited," McConnell said.

Policy on Myanmar has long been an area of bipartisan agreement between Republicans and Democrats, who were united in condemning the military regime that brutally repressed the country until 2011, united in praise for its gradual opening to democracy and united again in denouncing the coup launched February 1.

We've broken down the history and the complicated situation here:

Why are there protests in Myanmar?

People in Myanmar have been protesting across the country ever since the military seized control on February 1 after refusing to accept the results of a national election that gave the National League for Democracy 83% of the seats in parliament.

The military declared a state of emergency and security forces made up of police, soldiers and elite counterinsurgency troops have since responded brutally to peaceful anti-coup demonstrations and general strikes, killing more than 700 people, including children, as of April 12. The military has imposed curfews, put limits on gatherings and restricted access to the internet. Ousted civilian leader Aung San Suu Kyi and other members of the National League for Democracy have been detained and face charges in a secret court.

The military has repeatedly blamed the violence on protesters and said security forces were using "minimum force." Military spokesman Maj. Gen. Zaw Min Tun said during a recent CNN interview that junta forces cracked down because "the crowd are blocking with sandbags, shooting with handmade guns, throwing with fire, throwing with Molotov, and the security forces have to use the weapons for the riot."

What is the US doing?

The Biden administration unveiled sanctions in March, along with the European Union, naming military officials and other entities in Myanmar responsible for the violence. On March 30, the US State Department ordered all non-emergency employees and their family members out of the country, after allowing them to leave voluntarily in February.

On April 8, the State Department followed up, announcing sanctions on the state-owned Myanma Gems Enterprise, a key economic resource for the military regime that is headed largely by former military leaders. Myanmar is a major source of the world's rubies, sapphires and other gems, trade estimated to be worth $31 billion in 2014, and Myanma Gems Enterprise oversees most of the industry, collecting royalties.

"The Burmese military regime has ignored the will of the people of Burma to restore the country's path toward democracy and has continued to commit lethal attacks against protesters in addition to random attacks on bystanders," Secretary of State Tony Blinken said in a statement that described the security force's "brutal actions" that left hundreds dead.

Why hasn't that changed anything?

On Sunday, the European Union's foreign policy chief said China and Russia were blocking attempts by the UN Security Council to impose an arms embargo and undermining efforts to create common ground. UN Secretary-General Antonio Guterres reiterated his deep concern about the violence on Monday, calling it "appalling," and urged the Security Council to use its influence with Myanmar's military leaders to help resolve the issue.

How did the Trump administration deal with Myanmar?

The Trump White House tried to balance holding Myanmar accountable for violence against minority Rohingya Muslims in the country while calibrating its response to avoid a rollback in democratic progress there and trying to compete against Chinese influence in the country.

Has Myanmar always been a democracy?

No. The country won independence from Britain in 1948. The armed forces seized control in 1962. In 2011, the military started allowing a slow return to civilian rule, which was cut short by February's coup.

Myanmar, which Washington refers to as Burma, is in Southeast Asia. It shares borders with China, India, Thailand, Laos and Bangladesh. Its population of about 54 million includes many ethnic groups, including Rohingya Muslims, but the main religion is Buddhism. Burmese is the main language.

Why do people use two different names to refer to Myanmar?

When the armed forces seized control of the country in 1962, it was known as Burma. In 1989, its name was changed to Myanmar -- a more formal version of the country's name, which means fast and strong people. Many countries continued to use "Burma" to reflect their sense that the military regime was not legitimate. In 2011, the military started allowing a slow return to civilian rule and use of Myanmar has become more common.

Who is Aung San Suu Kyi?

Suu Kyi is the daughter of the general who led Burma to independence, Gen. Aung San, and spent more than 15 years under house arrest protesting the military's control of the country. Her time in detention made her an international icon and earned her the Nobel Peace Prize in 1991. She was released from house arrest in 2010 and became State Councilor in 2016, but her reputation has been badly damaged by her cooperation with the military and her defense of the campaign against Rohingya Muslims. The Biden administration is conducting a review to determine whether Myanmar's persecution of the Rohingya amounts to genocide.