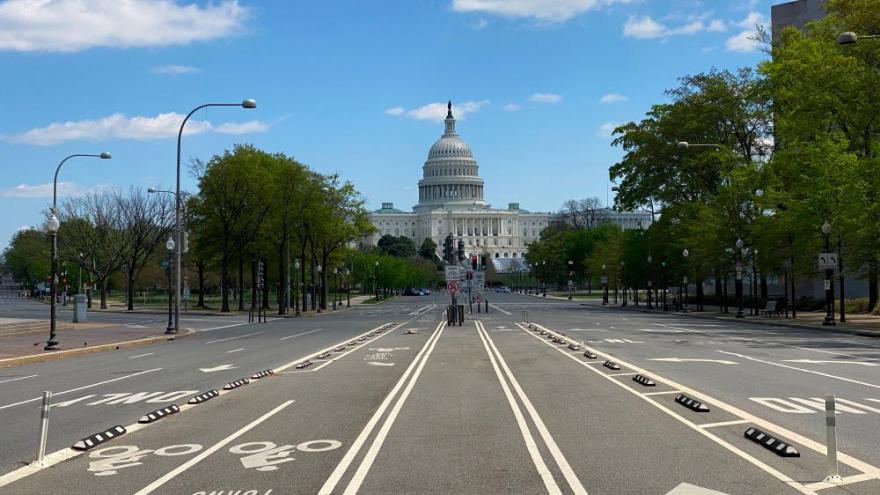 Empty Pennsylvania Avenue with the US Capitol is seen amid the coronavirus pandemic on April 15, 2020. Congress has reached a deal on a fourth coronavirus relief package, this one aimed at sending additional help to small businesses and hospitals struggling amid closures as well as expanding support for testing.

(CNN) -- Congress has reached a deal on a fourth coronavirus relief package, this one aimed at sending additional help to small businesses and hospitals struggling amid closures as well as expanding support for testing.

The package was passed by the Senate Tuesday evening and next goes to the House for a vote. President Donald Trump has offered public support, indicating he'll sign it.

Here's what the agreement includes, according to a bill text obtained by CNN.

The original $349 billion allocated for the Paycheck Protection Program loans for small businesses ran dry in under two weeks due to outsized demand -- and came in for criticism because restaurant chains were able to access the funds. Some say it would have run out even sooner had there not been so many technical problems with the Small Business Administration's loan processing system.

Lawmakers have now agreed to add another $310 billion to the fund. How quickly that second tranche of money would become available isn't clear yet. Once the bill is signed into law, it would likely take an additional day before the SBA can reopen the program, according to one banking industry source.

Also not clear: how long before that additional money is exhausted. There is a large backlog of applications in process from businesses that have already applied. The expectation is that it could be exhausted in under 10 days.

The deal would increase funding by $10 billion for Economic Injury Disaster Loan grants. Like the Paycheck Protection Program loans, the initial funding for these grants ran out quickly.

The promise had been that small business owners could essentially get up to $10,000 within three days of applying for it directly from the SBA website.

The Economic Injury Disaster Loan money does not have to be paid back if it is used to maintain payroll, cover paid sick leave and service other debt obligations. But if a small business owner gets both a grant and a forgivable Paycheck Protection Program loan, the forgiveness of the latter loan would be reduced by the amount of the grant.

But nearly every small business owner CNN Business spoke to in the past few weeks said they had applied for a disaster loan early but many had not received any money from it yet, and in some cases had not even gotten confirmation that their applications had been received.

Hospitals and health care providers would get an additional $75 billion to reimburse them for coronavirus-related expenses, such as buying additional personal protective equipment and expanding the number of beds they have.

It would also go to compensate hospitals and providers for lost revenue, mainly from the suspension of elective surgeries and procedures. This has hit hospitals very hard financially, forcing some to furlough workers or cut staffers' pay and hours.

The third stimulus package, passed in late March, created a $100 billion fund for these purposes -- which hospitals called a "good first step," implying more would be needed in a future bill.

The initial $30 billion allocation from that fund has angered some hospitals because it was distributed based on Medicare payments, not on number of coronavirus patients.

The bill would provide an additional $25 billion to expand coronavirus testing capacity, which many states and public health experts say is still lacking in the US.

It would give $11 billon to states, localities, territories and tribes to develop, purchase, administer and analyze tests, as well as to scale up lab capacity, conduct contract tracing and support testing by employers.

Trump and governors have sparred over the adequacy of and responsibility for testing in recent days. The President contends that the federal government cannot be in charge of testing in local communities. Governors, on the other hand, say they lack supplies to conduct the tests.

The bill calls for states, localities, territories and tribes to submit plans on how the resources will be used for testing and easing coronavirus community mitigation policies.

The package also would send $1 billion to the Centers for Disease Control and Prevention for surveillance, lab capacity expansion, contract tracing and other needs, and $1.8 billion to the National Institutes of Health to develop, improve and implement testing. Another $1 billion would go to the Biomedical Advanced Research and Development Authority for coronavirus tests and supplies.

In addition, the legislation would provide up to $1 billion to cover testing costs for the uninsured and would give $825 million to community health centers and rural health clinics, which frequently have to treat the uninsured.

The Trump administration declined to reopen the Affordable Care Act's federal exchanges to the uninsured, instead saying that the federal government would cover hospitals' costs for testing and treating the uninsured through a separate $100 billion fund. This fourth package added another $75 billion to that pool of money.

What's missing: Help for state and local governments or for food stamp recipients

House Speaker Nancy Pelosi and Senate Minority Leader Chuck Schumer didn't get everything they wanted in the fourth relief package. Two things were left out.

The Democratic lawmakers wanted to provide an additional $150 billion for state and local governments, which are also suffering from huge drops in revenue and increased public health expenditures. Several have already started furloughing workers and have warned of big budget cuts ahead. The third relief package, passed in late March, established a $150 billion fund for state and local governments to cover expenses related to combating the coronavirus outbreak.

Democrats also pushed for a 15% increase in the maximum benefit for food stamp recipients. While prior relief packages provided some additional funding for federal nutrition assistance, they did not increase the cap on the monthly amount that the nation's roughly 37 million food stamp participants receive. Food stamp enrollment is expected to climb as millions of Americans lose their jobs as businesses shutter their doors to slow the spread of the coronavirus.