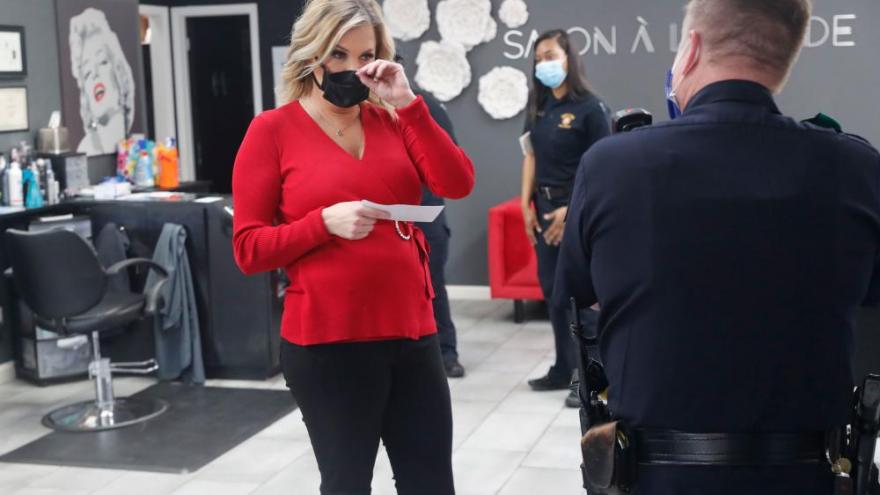 Salon owner Shelley Luther holds a citation and speaks with a Dallas police officer after she was cited for reopening her Salon A la Mode in Dallas, Friday, April 24, 2020.

(CNN) -- A salon owner in Texas is sitting in jail for opening her business early and violating the governor's executive stay-at-home orders to stop the spread of coronavirus.

Shelley Luther was found in civil and criminal contempt of court Tuesday in Dallas for ignoring a temporary restraining order prohibiting her from operating her business, Salon A la Mode, according to a court document.

As a result, Dallas Civil District Judge Eric Moyé ordered Luther to seven days in jail and fined her $500 for every day the salon stayed open.

Tuesday, Texas Gov. Greg Abbott announced a reopening of certain businesses starting May 8. According to Abbott's orders, salons are allowed to open May 8, with restrictions such as one customer per stylist and 6 feet between stations and customers waiting. Masks are strongly recommended but aren't mandatory.

Moyé said he'd consider only giving her a fine if she apologized, acknowledged she was wrong and agreed to keep her business closed until Friday, when the governor has announced all salons may open, according to CNN affiliate KTVT.

"If you would like to take this opportunity to acknowledge that your actions were selfish, putting your own interest ahead of those in the community in which you live," Moyé said to Luther inside the courtroom Tuesday.

"I have to disagree with you sir, when you say that I'm selfish because feeding my kids is not selfish," she said. "I have hairstylists that are going hungry because they'd rather feed their kids. So sir, if you think the law is more important than kids being fed then please go ahead with your decision but I'm not going to shut the salon."

However on Wednesday, Abbott released a statement saying he disagrees with Moyé's decision.

In a tweet, Sen. Ted Cruz of Texas called the ruling "nuts."

"I find it outrageous and out of touch that during this national pandemic, a judge, in a county that actually released hardened criminals for fear of contracting COVID-19, would jail a mother for operating her hair salon in an attempt to put food on her family's table," Paxton said in a press statement. "The trial judge did not need to lock up Shelley Luther."

Luther's attorney, Warren Norred, told CNN the court is not following the rule of law and Luther is offering services in a "very sterile environment" that is "kept very hygienic."

"He's (Moyé) focused on her (Luther) because she's the leader of a group of people who want more freedom and liberty to simply do nothing more than earn a living," Norred said.

"It is really rich for people who are essential workers and who are getting paid a full salary to tell these other people to just take it on the chin," Norred said. "I don't think that's quite right."

Luther had openly defied the governor's mandate that salons remain closed over the past few weeks, according to KTVT. She had ripped up a cease and desist letter from the county in front of a cheering crowd, and disregarded the judge's order, the station said.