When it's this cold, Chicago sets its train tracks on fire 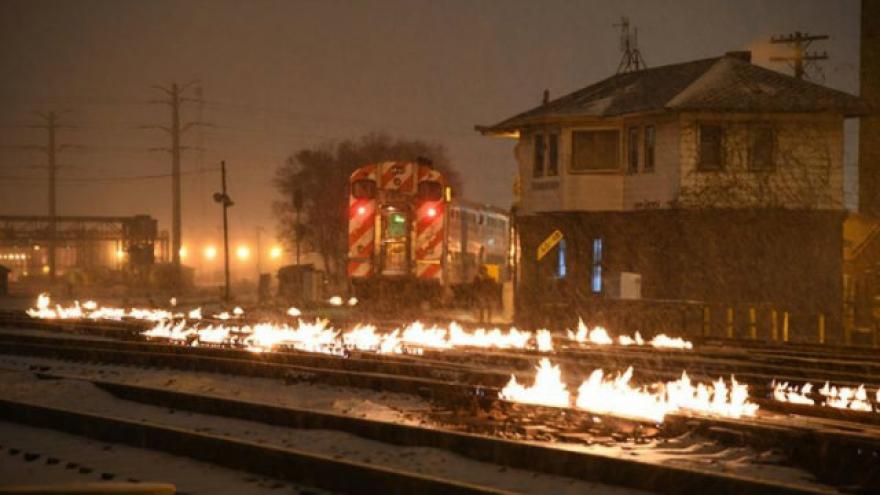 Maintenance crews light the heaters by hand and can control the flow of the gas, Metra said. Photo courtesy Metra

(CNN) -- Chicago residents are a hearty bunch. They know how to keep things moving when the weather turns cold.

But what about when it's this cold? Like wind-chill-of-50-below-zero cold? Getting around is lot tougher. When that happens, the folks who keep the commuter trains running in the Windy City employ a hot idea: They set the train tracks on fire.

Flames were seen sprouting from the tracks of Chicago's Metra commuter rail system on Tuesday.

"Anytime it's below freezing were using these," said Gillis, who said other rail systems in North America use similar systems.

Why? Tracks are affected by extreme cold in two ways.

In some cases the tracks experience what's called "pull-aparts." This kind of rail defect occurs when two rails separate at their connection. The extreme cold shrinks the metal and the rails literally pull apart from each other, Metra said in a recent Instagram post. Heating the tracks with fire expands the metal until the two rails can be put back together again.

Railroad switch points can also become clogged with ice and snow in subzero conditions, so the heating system is used to unclog them. Maintenance crews light the heaters by hand and can control the flow of the gas, Metra said. The crew members, working 12-hour shifts, remain in the area when the heating systems are being used so they can monitor the flames.

A few railroad ties are sometimes damaged by the heat, but this method is a lot safer than the one the rail system used to employ to thaw frozen tracks. Crews previously used pots filled with kerosene, stuck them in spaces between the track ties and lit them by hand.

"We all used to carry this stuff. I called it skunk oil," John Meyer, Metra's director of engineering, said on the rail system's website. "We poured it in a 2-gallon can, poured it out, and threw a match in it, and it'd start a fire along all the rails. We're talking in the mid-'70s. Nowadays you'd get in big trouble doing that."

Metra says it's safe to run the trains over the flames because the diesel fuel in the trains "combusts only with pressure and heat, not open flames."