When they spotted a familiar face at the Capitol riots, they reported it to authorities 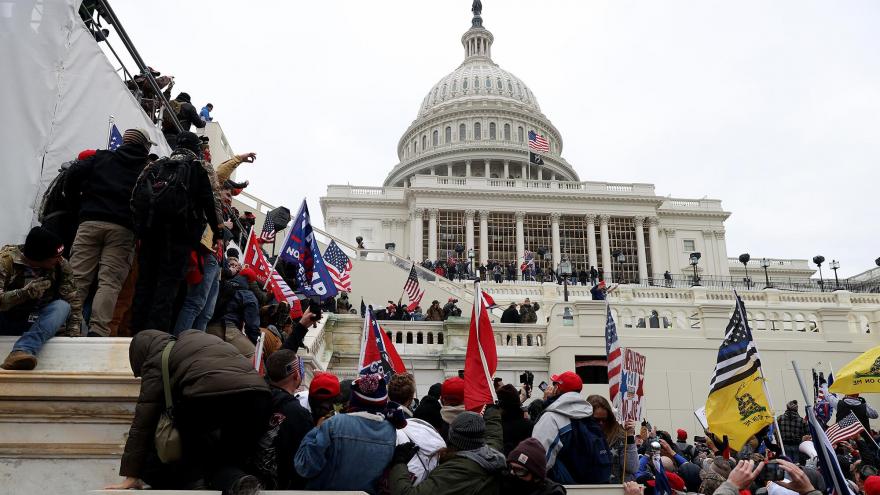 (CNN) -- When crowds of former President Donald Trump's supporters stormed into the US Capitol weeks ago, hundreds of photos and videos emerged: clips of crowds chanting violent threats, selfies inside the building, photos of ransacked offices and broken windows.

Americans watched in horror. Then, colleagues, friends and family members began pointing out the faces of people they knew, had shared holidays with and, in the midst of a national security crisis, they began reporting them to federal officials.

Patrick McCaughey, who was charged with assaulting a police officer seen on video getting crushed by a door and screaming in pain, was reported to the FBI by someone who knew him from childhood, according to court documents. McCaughey's attorney declined to comment.

Andrew Ericson, a 23-year-old man from Oklahoma, was charged with two misdemeanors related to the riot after an acquaintance reported his social media livestream to authorities, court documents show. Ericson's attorney declined to comment.

Matthew Mazzocco was charged with knowingly entering or remaining in a restricted building or grounds without lawful entry and violent entry and disorderly conduct on Capitol Grounds after a tipster told federal agents Mazzocco posted pictures at the Capitol on a Facebook youth sports page, court documents show. CNN reached out to Mazzocco and his attorney but has not heard back.

After a public call for help, the FBI has now received more than 200,000 digital tips from the public, Steven D'Antuono, assistant director in charge of the FBI's Washington, DC, Field Office, said late January.

"Some of you have recognized that this was such an egregious incident that you have turned in your own friends and family members," D'Antuono said. "We know that those decisions are often painful -- but you picked up the phone because it was the right thing to do."

At least 150 people have been charged by federal prosecutors in connection with the insurrection. Court documents show at least two dozen of those cases involved tips to the FBI from familiar faces: former romantic partners, old classmates, social media followers, siblings, neighbors, some who said they had noticed a pattern of concerning behaviors before January 6.

While the tipsters' motivations are unknown, Nathaniel Herr, an associate psychology professor at American University in Washington, DC, said it's likely many felt obliged to do something after the authorities' call for assistance.

"When the FBI is making a call, it feels like, 'Here's a legitimate place that I can finally report this thing that's been bothering me for a long time,'" Herr told CNN. "I would bet, in many of the reporters' experience, it was something that had been brewing for a while and now it was like, 'OK, someone's asking me for help.'"

'Choose a side or die'

Among those who turned to authorities is 18-year-old Jackson Reffitt, who reported his own father. Guy Reffitt, of Texas, was charged with knowingly entering or remaining in a restricted building or grounds without lawful authority and obstruction of justice. Investigators tracked his cell phone location and identified him in photographs taken at the Capitol, according to an affidavit. CNN reached out to Guy Reffitt and his attorney but has not heard back.

Jackson Reffitt told authorities he had heard his father admit he went to the US Capitol to "protect the country" and that he brought his gun with him. According to the affidavit, he said Guy Reffitt told them the FBI was now watching him. The son also told investigators his father said he would do "what he had to do" if Jackson Reffitt reported him to authorities, the affidavit states.

"He said, 'Choose a side or die,'" Jackson Reffitt told CNN's Chris Cuomo. "And if I chose a certain side, I would cross a line and he would do something he didn't want to do."

Guy Reffitt also threatened his daughter, telling her that if she put his comments on social media, he would "put a bullet" through her phone, the affidavit said, citing what Jackson Reffitt told investigators. According to the document, Guy Reffitt's spouse did not believe he would act on his words.

"Many statements have been taken out of context," Nicole Reffitt said in the statement. "I want it to be clear that no one present during the conversation in question ever felt that they were in any danger or felt like they were being threatened. We have texts that prove this."

Some were annoyed, she said, "but they never ever feared for their safety."

"Our home has always been an open door for people who need a warm bed, peace or a simple hug. Our home welcomes all people of all colors, faiths beliefs and opinions," her statement said. "Guy in particular listens to everyone and tries to understand all sides."

"My dad is a good man who always would help another in need no matter their political stance, religion or ethnicity," she said.

"I feel disappointed in him for making that decision even at all to go up there and risk his life and endanger others and put his family in this situation," Jackson Reffitt told Cuomo. "It might be my fault for talking to authorities but I don't want to think that. He's an adult and he made his own decisions."

Another tip to the FBI came from Larry Brock's ex-wife, according to an affidavit. Brock, a retired Air Force Reserve officer, walked into the Capitol wearing a green helmet, green tactical vest with patches, black and camouflage jacket and beige pants and holding a white flex cuff, usually used by law enforcement to detain subjects, according to a news release from the Department of Justice.

His ex-wife told the FBI she recognized him in a picture.

"I just know that when I saw this was happening I was afraid he would be there," she told authorities, according to the affidavit. "I think you already know he was there. It is such a good picture of him and I recognize his patch."

Brock has been charged with knowingly entering or remaining in any restricted building or grounds without lawful authority and one count of violent entry and disorderly conduct on Capitol grounds. CNN has reached out to Brock and his attorney but has not heard back.

For some, a gradual change

For some tipsters, the riots were the culmination of a bewildering descent, propelled by conspiracy theories and radicalization on social media.

But flagging concerning behaviors of a family member or friend isn't easy, experts say, especially when many are unsure if those activities will lead to violence.

"In the aftermath of all these international terrorism cases that we would see, even people in the US, time and time again the family members, the friends would say the same thing: 'I saw something that seemed out of the ordinary, but I didn't know what it meant or didn't know what it was and I didn't really want to confront that person,'" said Javed Ali, a former senior director for counterterrorism at the National Security Council and visiting instructor at the University of Michigan. "I think you're seeing the same phenomena play out here."

Jackson Reffitt said that for the past four years, he watched as his father "snowballed," becoming more active online, more involved with groups including "far right extremists."

According to the affidavit, someone with the name Guy Reffitt previously posted a comment on a "Texas Freedom Force" website, which investigators said is a "militia extremist group."

"He's been a lot more, I don't want to say aggressive, but a lot more scared," Jackson Reffitt said.

"He would never say the stuff he did to me a couple of years ago... not once would he even think about something like that," he added.

One witness told investigators that Kevin Strong, of California, who is charged with three crimes in connection to the riots, had been showing signs of "behavioral changes over the last few months, including stockpiling items" and telling people to prepare for martial law and hanging a flag with a Qanon-affiliated slogan on his house, an affidavit said. The witness also said Strong had sent messages to someone else claiming "World War 3 is going to occur on January 6."

CNN reached out to Strong and his attorney but has not heard back.

"As someone who used to look at this phenomenon of radicalization more on the international terrorism side, and looking at how people were similarly radicalized or mobilized to violence just like what happened on the sixth, from the al Qaeda ideology and the ISIS ideology, there are a lot of parallels to that world," Ali said.

The fact that there were so many reports to the FBI about loved ones shows, he added, that people's "antenna was up" and they saw things that "in retrospect made them think twice about the person who they ultimately turned in."