When tragedy struck, athletes stepped up for a Florida high school 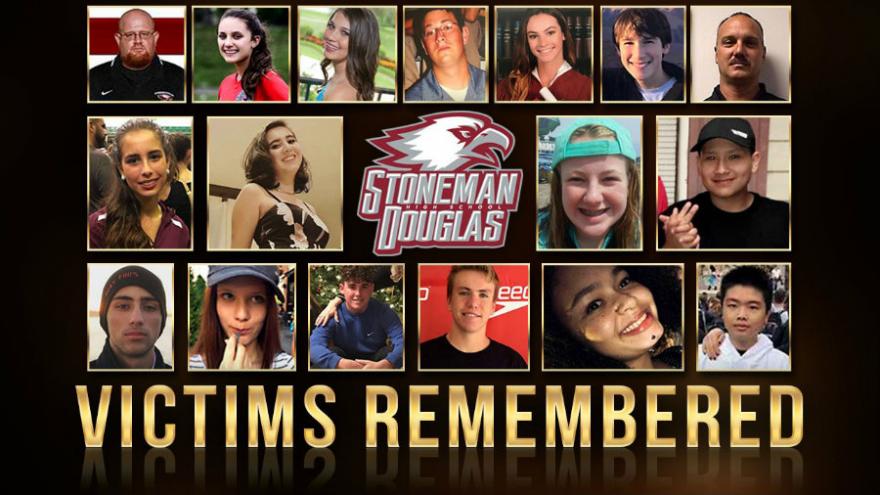 (CNN) -- Sports are often seen as a unifying force. They bring people together for fierce, friendly competition and they're supposed to make people forget about the troubles of the world outside the arenas and fields.

But when tragedy strikes, athletes and the teams they play for often step up to show their support of victims. This was seen in the days and weeks following the mass shooting at Marjory Stoneman Douglas High School in Parkland, Florida, that left 17 dead.

Aside from calling for gun control, here are just some instances of what athletes and teams did to support Parkland victims:

The US Women's National Team honored shooting victim Alyssa Alhadeff, 14, who played for Parkland Travel Soccer, by inviting her club and high school team to the SheBelieves Cup match against England in Orlando on March 7.

According to the team's official Twitter account, Alyssa's teammates and family received special, customized jersey's with her name and number on them.

The team also held a moment of silence before the game.

Dwyane Wade not only met with the family of shooting victim Joaquin Oliver -- who was buried in Wade's Miami Heat jersey -- but the NBA star also wrote Joaquin's name on his shoes during a game. The all-star guard also stopped by Marjory Stoneman Douglas High School last week and spoke with students "about some important/impactful things that they have planned."

Wade wasn't the only player showing support for the school and its students. Utah Jazz guard Donovan Mitchell wore shoes with "End Gun Violence" written in black on the side during a game against the Phoenix Suns. The other side of the shoe had "Pray for Parkland" written on it.

Three days after the tragic shooting, members of the Florida Panthers hockey team wore "MSD" patches on their jerseys, according to the team's official Twitter account.

A little over a week after the shooting, the Marjory Stoneman Douglas High School boys' hockey team won the state championship.

"He did the best he could. He gave his life for someone. I don't know if I'm built for that myself, to be completely honest," Liuget told WFOR-TV.

According to the GoFundMe page Liuget set up for the scholarship, it will be awarded to "a deserving graduating member of the football team." The player must share the same characteristics as Feis, which inlcude:

• Having a big heart

• Having a great work ethic

• Putting the team and others before themselves

• Graduating in the top half of the class

Liuget funded the scholarship with a personal $10,000 donation, WFOR-TV reported, and he's hoping the program can maintain a $50,000 balance.

Spring training teams in the Grapefruit League and Cactus League wore Stoneman Douglas High School hats for the first games of the 2018 exhibition season, according to Major League Baseball's website. Signed hats were auctioned with the proceeds going to the Broward Education Foundation.

Stoneman Douglas baseball and softball team players, along with their families, were invited to the Miami Marlins and the St. Louis Cardinals spring opener, MLB's website states. The game also featured a 17-second moment of silence before the national anthem to honor the victims of the shooting, MLB's website states.