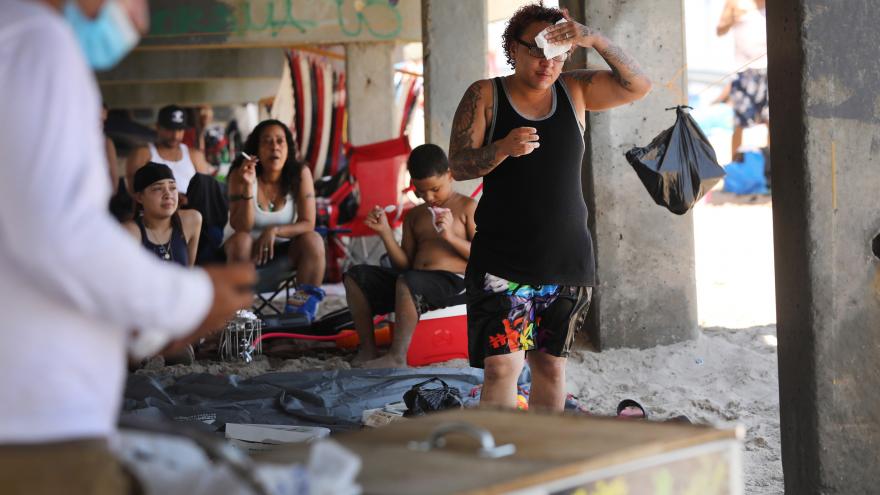 People try to keep cool at a crowded beach at Coney Island in Brooklyn on July 19, 2020 in New York City. Much of the country will experience another heat wave this weekend. Spencer Platt/Getty Images
(CNN) -- From the start, the Covid-19 pandemic has revealed America's social and economic inequality in stark relief, by disproportionately infecting and killing people of color, the elderly and those with pre-existing conditions.

Now, as the country sweats through the thick of what is likely to be another sweltering summer, another invisible threat looms.

This weekend, as a heat wave bakes huge swaths of the country under triple-digit heat indexes, some fear that the collision of Covid-19 and extreme heat could be a dangerous combination.

Extreme heat can threaten anyone, but many of the same groups who are at greatest risk of serious illness from the coronavirus are also the most vulnerable groups to heat exposure.

With indoor gatherings known to facilitate the spread of Covid-19, cities and relief organizations are adjusting how they keep people safe in this new normal.

And with millions across the country out of work and the virus forcing vulnerable people to stay in their homes, experts say the pandemic is compounding the heat risk for those who are already struggling.

"For staying safe from coronavirus, the message is that you're safer at home," said Dave Hondula, a researcher at Arizona State University's Urban Climate Research Center who studies extreme heat and health. "That is true from a coronavirus perspective, but if you don't have sufficient cooling, or are not able to control the temperature of your home, you may not be."

Though it tends to get less attention than other weather events, extreme heat can and, tragically, does kill.

It is one of the most deadly types of weather-related events in the US, killing an average of 702 people each year, according to Paul Schramm, the climate science team lead at the Centers for Disease Control. That's more than are killed in hurricanes, floods and tornadoes in most years, he says.

When high temperatures combine with stifling humidity -- as they are expected to do this weekend across the Midwest, South and East -- it can overwhelm a person's ability to sweat and cool down, leading to spikes in body temperature that can damage the brain and other organs.

And when temperatures stay high with little cool down overnight, the heat risk can rise even further.

The threat is greatest for the elderly, young children, people who are overweight, and those who work outside or exercise during the hottest part of the day, according to the CDC.

Experts also point to social isolation as a concern when it comes to extreme heat. Schramm recommends that people check in on at-risk family members or neighbors at least twice a day to look out for signs of heat exhaustion.

Cities are changing how they keep residents cool

We know that staying home and away from others is the best way to prevent the spread of Covid-19.

But if people are stuck inside without a means to keep cool, they could be trading one danger for another.

The CDC has issued guidance for how to safely open cooling centers, which many cities are still offering.

However, many of the informal cooling centers people normally use to get a break from the heat -- malls, libraries, pools and grocery stores -- are either closed indefinitely in many places, or aren't a safe space to spend hours inside.

"Folks are being put in a difficult position," Hondula said. "Do I stay at home to avoid getting coronavirus or do I risk heat illness or worse if my home is too hot?"

Gentry W. Trotter, who runs Cooldownstlouis.org, a non-profit that provides air conditioning and energy assistance to vulnerable populations, said demand in St. Louis is high for his organization's services. The city could see "feels like" temperatures between 100 and 105 degrees this weekend.

In the middle of summer in a normal year, Trotter said he typically gets around 1,500 inquiries per week about cooling assistance. This past week, however, the non-profit received more than 5,000 calls or online messages from people in need.

Thanks to donations and local funding from the CARES Act, he said so far they have been able to meet the level of need. But there are many more hot days still to come this summer, and the economic fallout from Covid-19 shows little sign of abating.

"So far, we're hanging in there," he said. "Every time I think we're out of money, a miracle happens and funding pops up."

Other cities are taking a proactive approach.

In New York City, which could see temperatures climb back into the high 90s by the end of the weekend, officials are delivering thousands of air conditioners to low-income seniors to protect those that are most vulnerable to the heat and Covid-19.

"We know that the same population that is susceptible to Covid-19 is also susceptible to heat illness," said Ben Krakauer, an executive advisor in NYC's Office of Emergency Management. "We also know that people staying in their apartments during a heatwave can see temperatures 10 to 20 degrees hotter than outside, which is why it's so dangerous."

The city's Public Service Commission also recently approved $70 million in aid to provide roughly 440,000 families with up to $140 in utility assistance from June to October.

And though the city isn't opening as many cooling centers as in years past, there will be around 220 modified ones available, as well as "cool streets" distributed throughout the city with misting tents and spray caps on fire hydrants, Krakauer said.

On top of all of this, there is climate change, which many studies have shown is making heat waves even more intense.

A study released earlier this year found that there are also now about 5 more exceptionally hot days in the Northern Hemisphere compared to 1960, and these days are approximately 2.7 degrees Fahrenheit (1.5 degrees Celsius) warmer due to global warming.

The researchers also found that without steps to rein in greenhouse gases, as many as three-quarters of summer days across much of the Northern Hemisphere could feature nearly around-the-clock extreme heat by 2100.

Climate change is also bringing high temperatures into regions that are less equipped to deal with them, which can amplify an already dangerous situation, said Juli Trtanj, a health and integrated climate extremes research lead at the National Oceanic and Atmospheric Administration.

"One of the things that concerns us are the parts of the country that don't traditionally think of themselves as having a heat problem -- like Seattle or Maine -- and yet when it's really hot in Seattle and there's no air conditioning, that's a real problem."