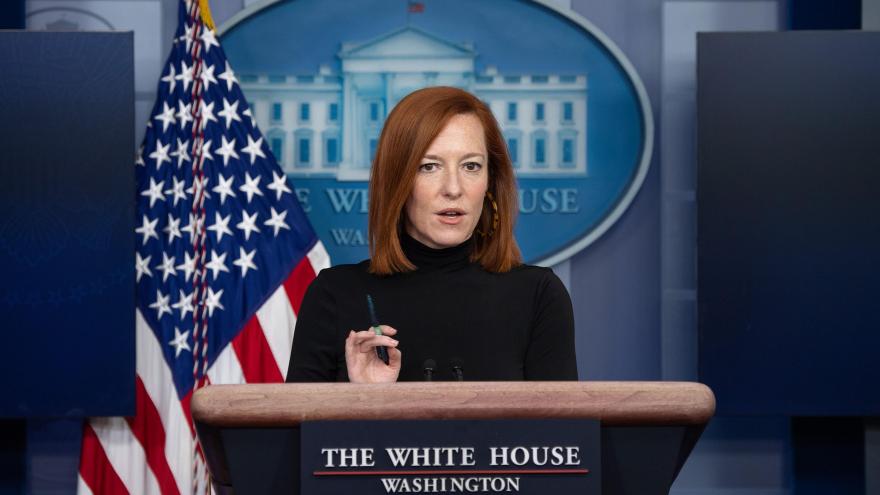 White House press secretary Jen Psaki told CNN\'s Dana Bash on \"State of the Union\" that Biden has been open to hearing from Republicans on the coronavirus relief package, but that so far, \"we have not seen a substantive, big proposal in response back from Republicans.\" Psaki is shown at a press briefing in the Brady Press Briefing Room of the White House in Washington, DC, February 3, 2021. - SAUL LOEB/AFP/Getty Images

(CNN) -- The White House and congressional Democrats on Sunday defended the House's passage of President Joe Biden's $1.9 trillion coronavirus relief package without any Republican support, arguing the Senate must now move quickly on the proposal to address the economic crisis caused by the pandemic.

White House press secretary Jen Psaki told CNN's Dana Bash on "State of the Union" that Biden has been open to hearing from Republicans on the bill, but that so far, "we have not seen a substantive, big proposal in response back from Republicans."

"This is the scope of the problem and the scope of the kind of package that needs -- we need to pass to address that," she said, adding that Biden isn't willing to "make this a Washington, political, partisan issue and prevent the American people from getting the relief they need."

The House approved Biden's Covid relief package early Saturday morning along party lines by a vote of 219-212 with no Republican support, moving the massive piece of legislation one step closer to the President's desk. Biden's expected approval risks undercutting his stated commitment to bipartisanship -- something Republicans have already seized on in their fight against the bill.

The relief package now heads to the Senate, where it's likely to receive broad support from Democrats in the chamber, including Sens. Sherrod Brown, Mazie Hirono and Chris Coons, each of whom also defended the bill against criticism aimed at its lack of Republican support in the House.

"Just because Senate Republicans don't support it doesn't make it partisan, what makes it bipartisan is the public support for it," Brown, an Ohio Democrat, told NBC.

Coons told Bash on "State of the Union" that his party "gave several weeks for there to be a serious negotiation that came close to the scope and range of this challenge," but that "the proposals that came forward weren't anything like the scale of the challenge."

"And so, frankly, we're moving ahead with a bill that probably will get no Republican votes in the Senate, but will have broad Republican support in the country," said Coons of Delaware.

Hirono, a Hawaii Democrat, told ABC that the Senate must "get the massive Covid bill passed and we know that we're going to have to do it without any Republican support."

"It's on the Republicans why we're having a hard time with getting the Covid bill done (in a bipartisan manner) in Congress, not across the country," she said, blaming the party for any hurdles that have slowed the process down in recent weeks.

Republicans, meanwhile, criticized Democrats' handling of the bill on Sunday, with Sen. Bill Cassidy, a Republican from Louisiana, telling Bash on "State of the Union" that Psaki's comments on his party being involved in the specifics of the legislation were a "joke."

"You can find one thing, perhaps, where oh my gosh we will get criticized on that, so we will adapt. But the reality is that they put forward a package which reflects the interests of the Democratic constituencies that elected the President," he said, pointing to funding in the bill for San Francisco's transit system.

"Yes, he was open to unity and bipartisanship," the senator said, referring to Biden's call for bipartisanship during his inaugural address. "That has not been this legislation."

Sen. Rob Portman, a Republican from Ohio, told ABC that he's disappointed the White House has not reached out to Republicans to work on a bipartisan bill now that the package has passed in the House.

"There are a number of things in here that have nothing to do with Covid relief," he said. "It's just not targeted. We have a Republican alternative, as you know, we've been talking with the President and his people about it. We got no response, which is much more targeted and focused ... that's what we ought to do. This is not difficult."

When the bill gets to the Senate, the chamber is expected to strip out a provision in the legislation increasing the federal minimum wage after the Senate parliamentarian ruled against including it under the procedure known as reconciliation, which Senate Democrats are using to pass the bill with a simple majority vote.

The bill would then head back to the House for a separate vote before it reaches Biden's desk to be signed into law.

Coons said on CNN that he doesn't think Democrats' inability to pass a minimum wage increase through the budget reconciliation process without Republican support should lead them to grow frustrated and "throw up the white flag" on bipartisan work.

"We will have other chances to pass bold legislation in this Congress in this year, but we have to give bipartisanship a chance," he said.

Asked if he would support proposals from Sens. Bernie Sanders and Ron Wyden that would penalize companies that pay their employees less than $15 an hour, a measure progressives see as another way to push a minimum wage hike, Coons said he had not yet seen the proposals.