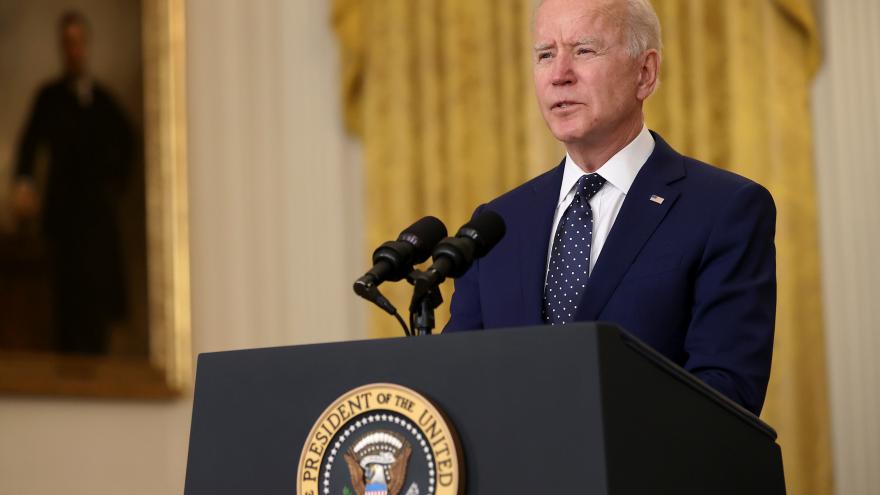 President Joe Biden will sign a declaration on Friday to speed refugee admissions to the US but not raise the refugee cap. Biden is shown here in the East Room of the White House on April 15, 2021 in Washington, DC. - Chip Somodevilla/Getty Images

(CNN) -- The White House said Friday President Joe Biden will set a new, increased refugee cap next month after facing a barrage of criticism when officials confirmed to CNN and other outlets that it would remain at the historically low level set by former President Donald Trump.

Only hours earlier, the administration announced Biden would sign an emergency determination that keeps this fiscal year's refugee cap of 15,000, but not raise the refugee cap as he had committed to doing, marking a significant reversal from his administration's proposal earlier this year to lift the cap to 62,500. The move faced immediate blowback from refugee groups and lawmakers frustrated by the sudden shift.

Instead, the emergency declaration returned to regional allocations, in effect casting a wider net of who can arrive to the US under the refugee ceiling currently in place. The administration left the door open for raising the ceiling some if the 15,000 is met before the end of September. Just last week, White House press secretary Jen Psaki had said Biden remained committed to raising the refugee cap to 62,500.

Claiming the President's directive on refugee allocations "has been the subject of some confusion," Psaki said Friday afternoon that Biden will "set a final, increased refugee cap for the remainder of this fiscal year by May 15."

"Given the decimated refugee admissions program we inherited, and burdens on the Office of Refugee Resettlement, his initial goal of 62,500 seems unlikely," she added.

CNN previously reported the administration was considering stripping restrictions put in place by Trump's presidential determination to allow more refugees to arrive in the US.

The Biden administration has come under increased scrutiny over recent weeks for the delay in signing off on the proposed increase to the refugee ceiling. A group of House Democrats circulated a letter this week urging Biden to sign the presidential determination, saying "lives depend on it." The refugee cap -- often been viewed as a goal to be reached -- must be approved by the President.

"It is deeply disappointing that President Biden has chosen to maintain for the moment the record-low refugee admissions cap of 15,000 set by his predecessor. The rightful erasure of discriminatory admissions categories does not dispense with the need for a higher number of refugees to be admitted," said David Miliband, president and CEO of the International Rescue Committee.

New York Democratic Rep. Alexandria Ocasio-Cortez, one of the most high-profile progressives in Congress, criticized the move.

"Biden promised to welcome immigrants, and people voted for him based on that promise. Upholding the xenophobic and racist policies of the Trump admin, incl the historically low + plummeted refugee cap, is flat out wrong. Keep your promise," she said on Twitter.

Biden resisted raising the Trump-era refugee cap because of political optics, sources have told CNN, at a time when the administration has been facing heat from Republicans and Democrats for its handling of an influx of migrants at the US-Mexico border. But the situation at the US southern border is separate from the refugee program, which dates back decades and has a thorough vetting process in place for refugees overseas to resettle in the US.

Earlier Friday, Psaki suggested that the Office of Refugee Resettlement, a federal agency under the Health and Human Services Department, had limited capacity, given the growing number of migrants at the border. "But I would say that it is a factor. (The Office of Refugee Resettlement), which is a part of HHS, does do refugee -- does do management, and had personnel working on both issues and so we have to ensure there is capacity and ability to manage both," Psaki said.

The process is different for migrants arriving at the border than refugees coming from overseas. Refugee resettlement agencies have repeatedly said they're prepared to take in refugee arrivals.

Jake Sullivan, Biden's national security adviser, tweeted that the US needs to "rebuild" the resettlement program for refugees.

"America needs to rebuild our refugee resettlement program. We will use all 15,000 slots under the new Determination and work with Congress on increasing admissions and building back to the numbers to which we've committed," Sullivan tweeted.

But Jenny Yang, the senior vice president of advocacy and policy at World Relief, said resettlement agencies have been preparing for an increase in arrivals. "That is a completely false argument. It's not grounded on any sort of reality," she told CNN. "It's not that they don't have capacity or resources. It's purely a political calculation at this point."

The proposal was also in line with Biden's commitment during the campaign to raise the refugee ceiling and return the US to admitting a higher number of refugees after historic low arrivals under Trump. Biden declared that his administration would bring the cap up to 125,000 refugees during his first full fiscal year in office, during his major foreign policy address at the State Department in February.

"I'm approving an executive order to begin the hard work of restoring our refugee admissions program to help meet the unprecedented global need," Biden said. "This executive order will position us to be able to raise the refugee admissions back up to 125,000 persons for the first full fiscal year of the Biden-Harris administration. And I'm directing the State Department to consult with Congress about making a down payment on that commitment as soon as possible."

But with the situation on the US-Mexico border heating up, the proposal -- and accompanying paperwork -- had stalled.

The delay resulted in the cancellation of hundreds of refugee flights and left thousands of people expecting to arrive in the US after a years-long process in limbo. The emergency presidential determination will pave the way for some refugees already approved for travel but barred under the Trump restrictions to come to the US.

"It's disappointing, but now approved and vetted refugees can come here," said Mark Hetfield, president and CEO of HIAS, a refugee resettlement organization.

As of March 31, only 2,050 refugees had been admitted to the United States this fiscal year under Trump's 15,000 cap, according to the Refugee Processing Center, which is part of the State Department.