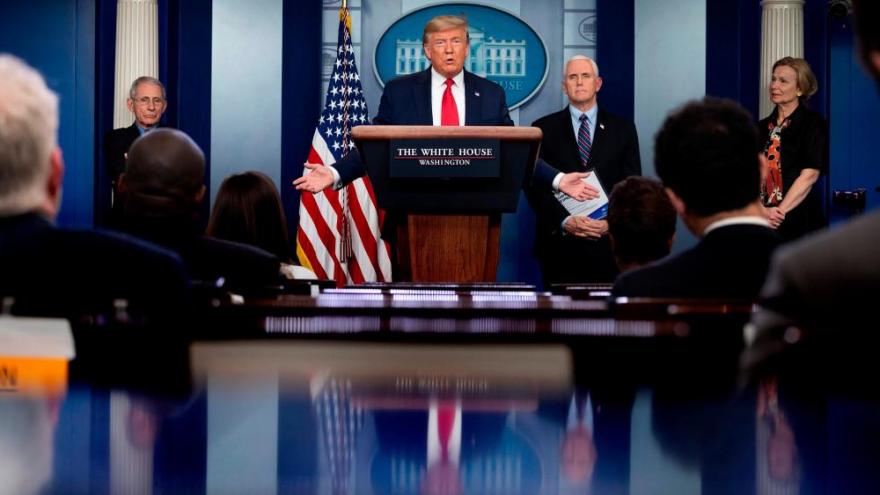 The official said the task force "will be phased down around Memorial Day. We will continue to have key medical experts advising (President Donald Trump) daily and accessible to press throughout the coming months ahead."

The New York Times first reported the White House's plan to wind down the task force.

The move would quash the most visible nerve center for the federal government's response to the virus. But a senior administration official told CNN to expect members of the task force to still be involved in conversations with governors and industry leaders because the White House is aware that leaders still want to hear from doctors as they reopen their states and businesses.

News of the plan to phase out the task force comes as the rate of the country's daily new Covid-19 cases and reported deaths plateau, according to the Johns Hopkins University Coronavirus Research Center. However, the influential model created by the Institute for Health Metrics and Evaluation at the University of Washington projected a doubling of US deaths -- to 134,000 by August 4 -- and an increased daily death toll as governors, urged on by Trump, relax social distancing measures.

The news comes a little more than a week after CNN reported that the task force might soon begin slowly scaling back its number of meetings altogether, according to a source, as Trump and Vice President Mike Pence schedule other events.

Officials said that the task force's end may never be officially announced and no clear replacement group appears ready to commence in its wake, the Times reported. A second senior administration official told CNN, "This does not mean doctors are being removed from the equation or pushed out."

The second senior administration official told CNN that the White House is shifting its focus toward reopening the economy "and putting Americans back to work." That shift will take place over the next few weeks and doctors such as Dr. Deborah Birx and Dr. Anthony Fauci, who have been prominent figures in the President's task force briefings with reporters, will still play "an important advisory role" in the process, the second senior administration official said.

"Members of the task force will continue providing input, though the group but will not be meeting as regularly as the focus changes toward vaccines, therapeutics, testing, and ultimately reopening the economy," the second senior administration official said. "Keep in mind the task force was always a temporary arrangement. Health experts will continue providing input even while not meeting together every day."

Pence confirmed to reporters on Tuesday that the White House is having conversations about when the timing would be right to disband the task force. The comments were made in a small briefing with reporter to which CNN was not invited. The vice president's office later provided a partial transcript of the comments.

"We're having conversations about that and about what the proper time is for the task force to complete its work and for the ongoing efforts to take place on an agency-by-agency level," Pence said, adding that the White House has begun to discuss a "transition plan with FEMA."

Pence added that the White House is "starting to look at the Memorial Day window, early June window as a time when we could begin to transition" away from the task force.

One source familiar with the task force conversations said that one of the reasons they are starting to discuss the phase down is because Pence wants to get out and travel more. He can't lead a task force while doing that, such that it would be better for the Department of Health and Human Services and other relevant agencies to take the lead at that point, the source added.

When asked if the President pushed this idea, the source insisted Trump did not but added he is not opposed to it.

It's another sign that change is looming on the state of the federal response.

The task force held an in-person meeting Tuesday morning -- its first in-person meeting since Friday. On Monday, The New York Times reported the Trump administration has an internal model projecting a rise up to about 3,000 daily US deaths from coronavirus by June 1.

Trump has been anxious to reopen the nation and push an economic message, as his campaign had been counting on the economy to boost him in November but had been forced to change tactics.

He has been notably inconsistent in his response to states reopening, expressing seemingly vacillating comments on Georgia's reopening as recently as last week. He also sided with protesters -- some of whom were armed -- in Michigan last week for their protests demanding the state reopen after Democratic Gov. Gretchen Whitmer extended her emergency declaration keeping some businesses shuttered.

This story has been updated with additional information and reporting on Tuesday.