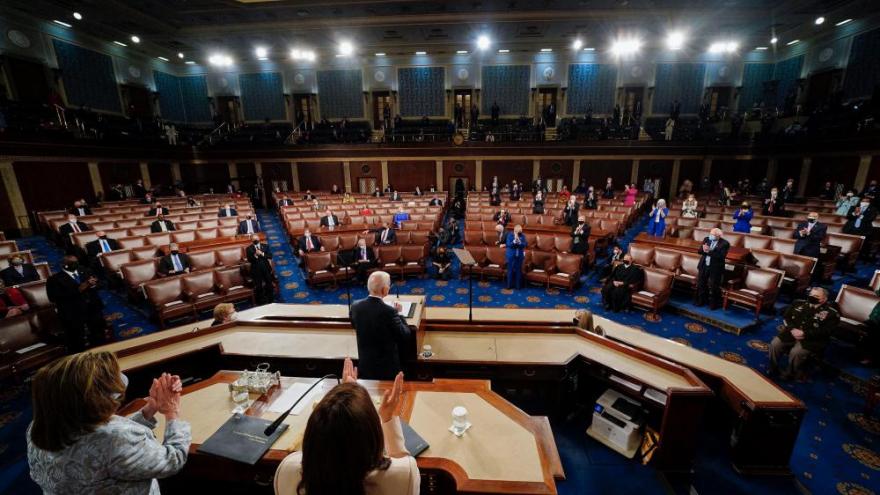 US President Joe Biden addresses a joint session of Congress at the US Capitol in Washington, DC, on April 28, 2021.

(CNN) -- President Joe Biden's major public -- and prime time -- push this week for his sweeping $4 trillion economic agenda was only one piece of the White House push to lay the groundwork to move his agenda.

Behind the scenes, the White House ramped up its bipartisan outreach on Capitol Hill -- an expansion of an effort that has been underway since Biden laid out the first piece of that agenda last month, according to a White House official.

During the same week that Biden publicly rolled out the $1.8 trillion final piece of that proposal before a joint session of Congress and made two trips outside of Washington, Biden's legislative affairs and policy teams conducted 110 calls to bipartisan members, chiefs of staff and staff directors, the official said.

The behind-the-scenes push underscores the efforts by the White House to lay out their proposals in detail, but also to start to test the waters for a potential bipartisan path forward.

Biden has already hosted two meetings with bipartisan lawmakers in the Oval Office and has pledged to look for a path toward a bipartisan deal. He spoke by phone with Sen. Shelley Moore Capito, the West Virginia Republican leading a group of GOP senators who have put an infrastructure counter-framework on the table. He's expected to extend more invitations to the White House as soon as next week.

"I wanted to lay out, before the Congress, my plan before we got into the deep discussions," Biden said during his address to Congress this week. "I'd like to meet with those who have ideas that are different -- they think are better. I welcome those ideas."

Biden also will host his first meeting with the top four congressional leaders on May 12 to discuss a range of issues.

Still, it remains unclear whether any such pathway exists. Republicans have rejected key elements of the $2.25 trillion infrastructure and jobs proposal Biden laid out in March. They quickly came to criticize both the scale of the spending and tax increases on the wealthy that form the basis for Biden's second proposal.

"Over a few short months, the Biden administration seems to have given up on selling actual unity in favor of catnip for their liberal base covered with a hefty coat of false advertising," Senate Minority Leader Mitch McConnell, a Kentucky Republican, said after Biden laid out his latest proposal this week.

Biden, for his part, has signaled there are limits to how long he's willing to push for any kind of bipartisan deal if Republicans aren't willing to meet his view of the scale of what's necessary.

"The rest of the world is not waiting for us," Biden said in his address. "I just want to be clear: From my perspective, doing nothing is not an option."

Still, the push by Biden's team with lawmakers and staff marked an expansion of an effort that launched in earnest with Biden's infrastructure proposal. In total, Biden's legislative affairs team has had 415 calls or meetings with members, chiefs of staff and staff directors on that piece of the proposal, the official said.