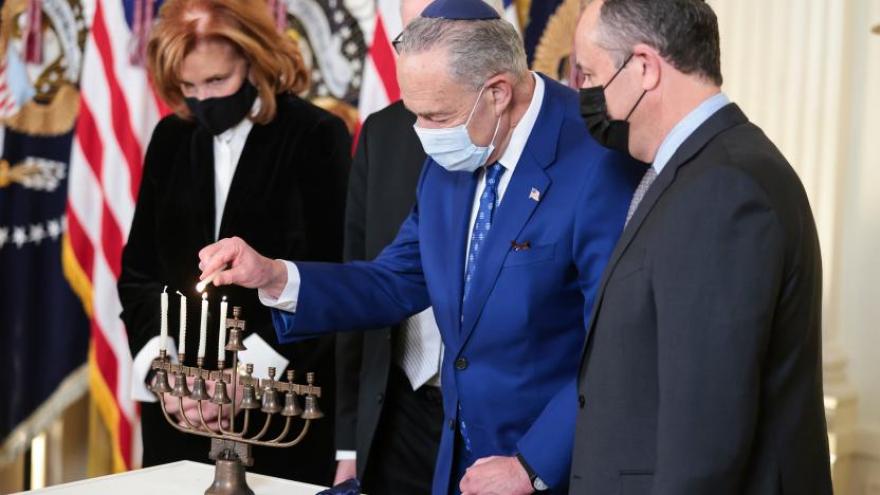 Senate Majority Leader Chuck Schumer lights a menorah as second gentleman Doug Emhoff looks on during a celebration of Hanukkah in the East Room of the White House on Wednesday, December 1.

(CNN) -- The first and second families held a menorah lighting ceremony to celebrate Hanukkah at the White House on Wednesday evening, marking the first time the holiday has been celebrated at 1600 Pennsylvania Avenue with the Jewish spouse of a president or vice president.

"This is a White House tradition, but for the first time in history it is a family tradition," President Joe Biden said during the event in the East Room. He said the White House was honored to have second gentleman Doug Emhoff, who is Jewish, leading the lighting.

During remarks at the ceremony, the President said, "The Hanukkah story provides a powerful lesson and nourishes the wellspring of hope. In darkness there's light. In cynicism there's hope, and optimism, and the unyielding belief that miracles are possible."

He also recalled something the late Democratic Rep. Tom Lantos of California once said: "The veneer of civilization is paper thin. We are its guardians and we can never rest."

"Well, it's paper thin and we are its guardians," Biden added, referencing recent anti-Semitic acts. "All it takes is an opening -- a silver, a crack, the briefest nod of acceptance or legitimacy -- for ancient evils that long plagued our society to come rushing in."

During the event, Emhoff recalled a recent visit to his New Jersey childhood home, saying, "I actually got to peer into the house, and I saw the windowsill where our family menorah sat."

"And then to think that today I'm here before you as the first Jewish spouse (of) an American president or vice president, celebrating Hanukkah in the people's house -- it's humbling," Emhoff said. "And it's not lost before me that I stand before you all on behalf of all the Jewish families and communities out there across our country. I understand that and I really appreciate it."

Emhoff underscored that "our history, our values as Jews, are an essential part of who we are as Americans. Jewish values are American values, and I believe this deeply."

"Every year our family, like so many around the world, gather to reflect on the lessons of the Hanukkah story," Harris said. "The power of the people. The possibility of the future. That even in despair, there is hope. That even in darkness, there is light."

According to the White House, the menorah used during the ceremony is the Liberty Bell menorah, on loan from the National Museum of American Jewish History in Philadelphia.

"The artist, Manfred Anson (1922-2012), was a Holocaust survivor and collector of Judaica, who designed this menorah in honor of Philadelphia's very own Liberty Bell," a White House description says. "The bells were cast from a souvenir tchotchke that Anson collected after immigrating to the US, and each is inscribed with the name of a Jewish American."

A phrase inscribed on the Liberty Bell, "Proclaim Liberty Throughout All the Land Unto All the Inhabitants thereof," is also featured prominently on the menorah.