White House prepares for US death toll from coronavirus to exceed 100,000 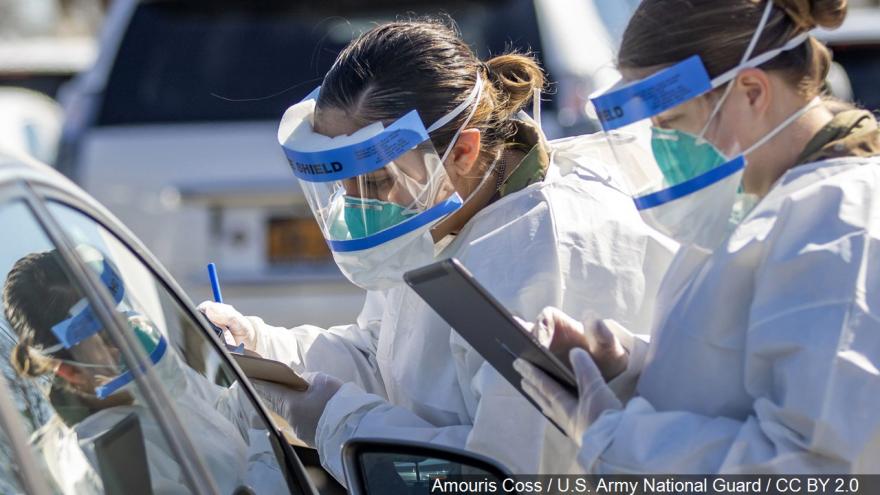 (CNN) -- White House officials predicted a stark US death toll of more than 100,000 people from coronavirus, saying measures working to curb the spread of the virus are the only hope for keeping that total from rising further.

Those measures could be especially valuable now that data shows as many as one-fourth of those infected with the virus could be walking around with no symptoms and transmitting it, according to the head of the US Centers of Disease Control and Prevention.

"One of the (pieces of) information that we have pretty much confirmed now is that a significant number of individuals that are infected actually remain asymptomatic. That may be as many as 25%," CDC Director Dr. Robert Redfield told NPR. He did not elaborate on how he reached that number. CNN has reached out to the CDC.

At least 185,499 Americans have so far been infected, according to CNN's tally. At least 3,834 people have died --- about 830 of those deaths were reported Tuesday, the most reported US deaths in a single day.

By mid-April, when the virus is projected to hit the country the hardest, as many as 2,000 Americans could die each day, a model cited by the White House shows.

Dr. Anthony Fauci said he would "lean towards" recommending that the general public wear facemasks "if we do not have the problem of taking away masks from the healthcare workers who need them."

"Particularly now that we're getting some inklings that there's transmission of infection from an asymptomatic person who is not coughing, who is not sneezing, who just appears well. Well, how do you think that's happening?" Fauci said.

"It very well could be aerosol. Maybe not aerosol, you know, that goes on for hours. But even the slight aerosol in which you're talking to somebody. If that's the case, we should at least look at the data and try to make a decision about that," he said.

The World Health Organization said Monday it was standing by its recommendation that only people sick with coronavirus or those caring for someone who is sick should wear face masks.

"There is no specific evidence to suggest that the wearing of masks by the mass population has any potential benefit," saidDr. Mike Ryan, executive director of the WHO health emergencies program. "In fact, there's some evidence to suggest the opposite in the misuse of wearing a mask properly or fitting it properly."

Officials expect US death toll of at least 100,000

White House officials said Tuesday more than 100,000 Americans could succumb to the virus in the US -- and that's if all the federal guidelines are followed closely, such as residents washing their hands often, staying home and keeping a distance.

Without those mitigation efforts, some models show as many as 2.2 million deaths, said Dr. Deborah Birx, the White House coronavirus response coordinator.

Social distancing efforts seem to be paying off, health officials across the country have said, including in Washington state's King County -- the country's first coronavirus epicenter.

Fauci cautioned that number was just a prediction and could still be lowered.

"This is the thing to anticipate but that doesn't mean that we are going to accept it," he said Tuesday. "We are going to do everything we can to be below that."

"I think the more we push on the mitigation, the less likely it would be that number," he added.

The next 30 days will be crucial, health officials said in the White House briefing.

By now, nearly 80% of the country's population has been ordered to stay at home, according to a CNN count. That count includes state, city and county orders as well.

In California, the first to issue a statewide stay-at-home order, Gov. Gavin Newsom said he expects the highest number of cases in hospitals across the state in mid-May.

That prediction takes into account how residents perform with social distancing efforts across the state, said Dr. Mark Ghaly, the state's Health and Human Services Secretary.

Early feedback on those kinds of efforts across the country seem to indicate they may be working to bring numbers down.

In hard-hit New York, a CNN analysis shows the day-to-day average of case increases in the past week was 17% -- a major decrease from 58% for the previous seven-day period.

In Northern California, "the surge we have been anticipating has not yet come," said Dr. Jahan Fahimi, medical director at the University of California San Francisco Health.

And in Washington State's King County, two new reports from an institute that specializes in studying disease transmission dynamics showed social distancing measures appeared to be making a difference.

"We are looking at reductions in person to person contact that have progressively improved and have led us to a point where we are making a very positive impact," said Dr. Jeff Duchin, the public health officer for Seattle and King County.