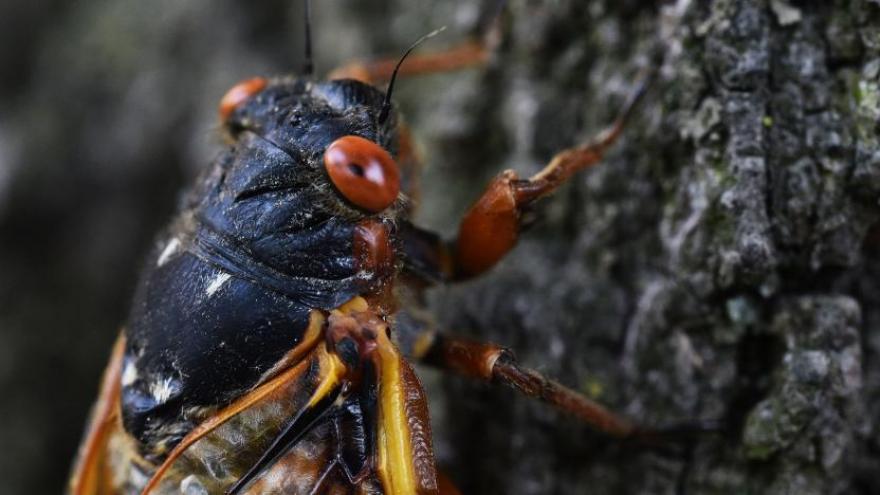 A periodical Brood X cicada climbs up an oak tree in Washington, DC on May 20. The White House press charter plane scheduled to leave Washington ahead of Joe Biden's first trip abroad as president has been delayed by cicadas.

The White House press charter plane scheduled to leave Washington on Tuesday evening ahead of Joe Biden's first trip abroad as president was delayed by cicadas, the noisy insects that have emerged after their nearly two decades of slumber.

The chartered plane had been scheduled to depart around 9 p.m. ET, but a new aircraft had to be dispatched to Dulles International Airport after airline officials informed White House travel aides that cicadas had invaded exterior sections of the plane late Tuesday afternoon.

The flight left early Wednesday morning, more than six and a half hours behind schedule.

Delta said in a statement on Wednesday, "A Delta charter flight on June 8 was delayed due to an inoperative auxiliary power unit (APU) on the Airbus A330 widebody aircraft. At issue was the presence of periodical cicadas within the APU, rendering it unworkable. Delta teams dispatched a replacement Airbus A330 aircraft and crew to Washington-Dulles International Airport to operate the flight."

"We apologize to our charter customers for this rarest of entomological delays, but still nothing is more important than safety," the statement reads.

Biden departed for England on Wednesday morning aboard Air Force One -- an aircraft that presumably has better protection from the East Coast cicada invasion. But the President still had to swat a cicada from his neck before boarding.

"Watch out for the cicadas," he told reporters. "One just got me."

The loud, cacophonous bugs first emerged from the ground in May on the East Coast as part of Brood X, which comes out every 17 years, according to the National Park Service.

To some, the brood's emergence is an awe-inspiring experience, worthy of glossy cicada photo shoots and endless media profiles. To others, cicadas can be a creepy, inescapable nuisance (one recently crawled onto CNN's chief congressional correspondent, Manu Raju, during preparations for a live shot).

This round of cicadas will be dying off in late June and early July, so we can look forward to the next time they come, in 2038.