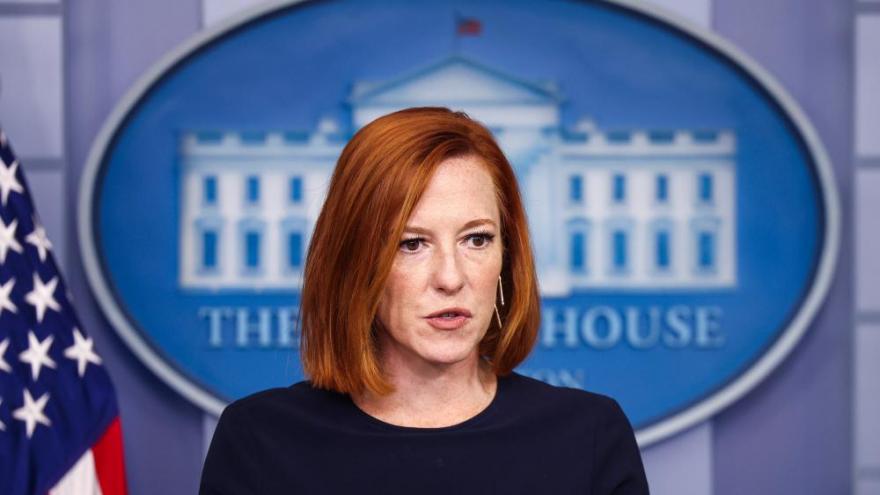 The White House says a Russian invasion of Ukraine is "imminent," even as diplomatic efforts to defuse the crisis proceed, and pictured here, White House Press Secretary Jen Psaki speaks during a press briefing at the White House on October 18, 2021 in Washington, DC.

(CNN) -- President Joe Biden acknowledged Tuesday a deeply uncertain situation at the Ukraine border, where Russian troops are amassing but few observers have any definitive knowledge of whether or when they might invade.

Earlier, the White House said a Russian invasion was "imminent," and American troops have been placed on high alert to deploy to Europe in a show of reassurance. US and European sanctions have been readied in the event of an invasion. Biden also said he'd be willing to apply sanctions on Russian President Vladimir Putin himself, a step previous presidents have avoided.

Even as tensions mount, however, Biden conceded that one man's opaque decision-making would determine how events unfold.

"This is all Putin. I don't even think his people know for certain what he will do," Biden said as he made a brief outing in Washington for ice cream and to browse a local store, purchasing gifts for his wife and grandson.

And Biden revealed he could move US troops into Eastern Europe soon to demonstrate American commitment to its NATO allies: "I may be moving some of those troops in the near term just because it takes time. And again, it's not provocative," he said.

Still, Biden made clear Putin remains something of an enigma, whose vague intentions have have proved befuddling to him and other western leaders.

"I'll be completely honest with you, it is a little bit like reading tea leaves," Biden said after browsing a small gift shop and selecting a sweatshirt for his grandson.

"Ordinarily, if it were a different leader, the fact that he continues to build forces along Ukraine's border, from Belarus all the way around, you'd say, 'Well, that means that he is looking like he is going to do something,'" Biden went on. "But then you look at what his past behavior is and what everyone is saying and his team as well as everyone else as to what is likely to happen, it all comes down to his decision."

Biden has spent the past several days receiving updates on the matter, and on Monday ordered 8,500 US troops to stand ready to deploy to eastern Europe. He made clear again Tuesday that no American forces would move into Ukraine.

Further US military assistance to Ukraine arrived Tuesday with approximately 300 Javelins and 79 tons of equipment arriving in the country, the US embassy in Kyiv said in a tweet.

Even as military preparations get underway, diplomatic efforts to defuse the crisis were proceeding. Russian and European officials planned to meet in Paris this week to continue discussions on reviving a ceasefire agreement in Eastern Ukraine, and the US was preparing written responses to Russian security demands that were presented last month.

Last week, Biden predicted Putin would ultimately decide to move into Ukraine, and he said Tuesday that little had changed to alter his view.

"There's been no change in the posture of the Russian forces," he said.

Earlier, his spokeswoman described a Russian invasion of Ukraine as "imminent," though in Kyiv, Ukrainian leaders have sought to downplay the threat.

"When we said it was imminent, it remains imminent," press secretary Jen Psaki said during a daily briefing. "But again, we can't make a prediction of what decision President Putin will make. We're still engaged in diplomatic discussions and negotiations."

An administration official told CNN after the briefing that "there has been no change in where we have been since last week which is that Russia could invade at any time."

Ukrainian officials said Tuesday the latest military intelligence suggests Russian forces are not yet prepared to stage an invasion into the country, and downplayed the prospect of an impending invasion.

Speaking to CNN, a source close to the Ukrainian leadership said defense and intelligence chiefs are analyzing satellite images of Russian forces "from US and other Western agencies" on an hourly basis, but are not yet seeing Russia "getting into combat mode or positioning themselves to attack."

The threat from Russia is "dangerous, but not imminent," the source said, adding if any Russian order to attack is given it would still take one to two weeks for Russian forces near the border to be ready.

Psaki said that signals from Russia were clear, even if Putin's intentions were not.

"No one can get into the mind of President Putin or Russian leadership. We all know that is the case. What we have seen is a range of preparations," she said, citing the build-up of more than 100,000 troops at the Russia-Ukraine border, "bellicose rhetoric" and potential false flag operations.

On Monday, Ukraine's President Volodymyr Zelensky said in a video address posted to his official Facebook page that his citizens had "no reason to panic" as authorities are "working for the full de-escalation of the situation" in eastern Ukraine.

Other Ukrainian officials have also sought to project calm, including the defense minister, who said Tuesday there was "no need to have your bags packed."

As they seek to demonstrate a level of stability, officials in Ukraine have voiced displeasure at a decision to draw down staffing at the US embassy in Kyiv, calling it unnecessary.

"We believe such a step to be a premature one & an instance of excessive caution," a spokesman for the country's foreign ministry said in a tweet.

Psaki said Tuesday displeasure from the Ukrainian government at the US decision to withdraw some embassy staff was misplaced.

"We're always going to make decisions that are in the security interests of people who are serving as diplomats around the world, and we have assessments that are made by the State Department, hence the decision in the announcement made over the last couple of days," she said.

"I will let others assess, but there are 100,000 Russian troops on the border of Ukraine and no clarity that the leader of Russia doesn't intend to invade," she said. "That sounds pretty dangerous to me."

In any case, a vast majority of US personnel at the US Embassy in Kyiv are staying at the post and are not taking advantage of voluntary departure, a source familiar with the matter told CNN Tuesday.

The source said there has not been a significant drawdown as a result of the authorized departure of US personnel.