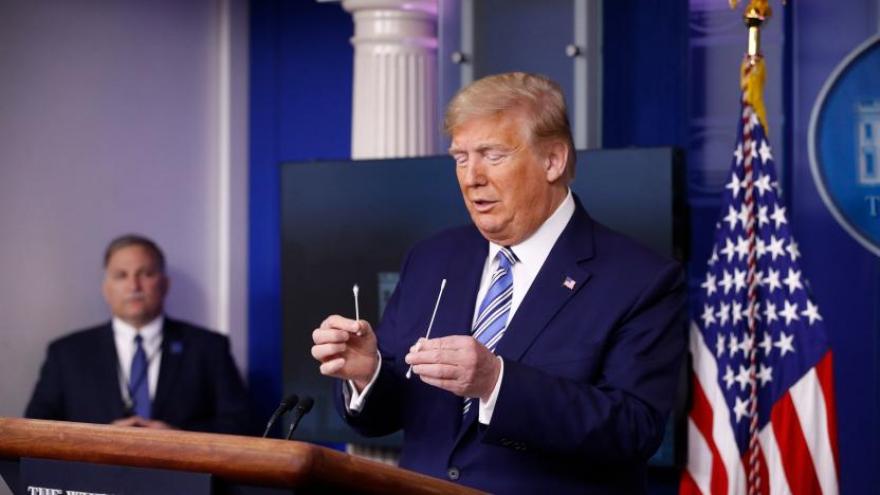 President Donald Trump holds swabs, one that could be used in coronavirus testing, right, as he speaks during a coronavirus task force briefing at the White House, Sunday, April 19, 2020, in Washington.

(CNN) -- The White House is preparing to use the Defense Production Act to give a Maine medical supplies company federal funding so it can ramp up its production of swabs needed for coronavirus testing.

President Donald Trump announced Sunday he will compel a US company to make swabs under the Defense Production Act, but Peter Navarro, his trade adviser who Trump tapped to coordinate DPA use, clarified to CNN Monday that the White House plans to use the act to give Puritan Medical Supplies federal funding to boost production.

"Title III of the DPA has been used frequently by the Trump administration over the last three years to provide funding for companies essential to our industrial base and critical to national security. In the case referenced by President Trump, (the Defense Department) is finalizing negotiations under DPA Title III with Puritan, a small company in Guilford, Maine. With DPA support, Puritan will be able to increase its industrial capacity in machine tooling, people, and facilities with the broader goal of increasing nasal swab production from 3 million to more than 20 million within 30 days of the contract award," Navarro told CNN in a statement.

The administration has not finalized the DPA use yet, and it's not clear how much funding the company will get.

Navarro noted that Trump has employed the DPA in different ways during the pandemic.

"President Trump has already used the DPA to accelerate the production of ventilators in the GM case, to secure the supply chain for ventilator production by ordering a priority rating for ventilator components, and to crack down on hoarding."

Puritan Medical Products, which is based in Maine, is known for making "flocked swabs," which it says are better at collecting specimens than others.

Trump said the administration had experienced "difficulty" with the company, but he did not elaborate further. Puritan did not respond to CNN's request for comment.

"We've had a little difficulty with one so we'll call in -- as we have in the past as you know -- we are calling in the Defense Production Act and we'll be getting swabs very easily," Trump said.

Last week, the Food and Drug Administration touted a new alternative swab it approved that could eventually allow people to collect their own samples for coronavirus diagnostic testing at home. One company making those swabs, US Cotton, says they aren't ready yet.

Working with the FDA, US Cotton designed a shorter swab than the kind typically used by health care workers. The new swab can collect a sample from the front of the nose, instead of the others that are long and must be directed deep into the nose, which can be painful.

John Nims, the president of US Cotton, said Friday the company isn't quite prepared to start shipping those new swabs yet but he hopes to begin doing so in "a couple weeks." Once it does, the company aims to ship 3 million a week until the swabs are no longer needed, according to Nims.