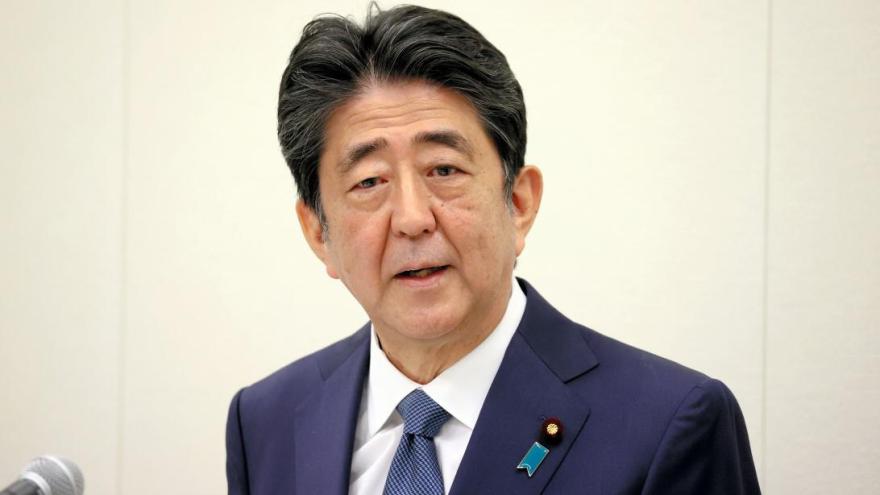 (CNN) -- President Joe Biden on Friday said he was "stunned, outraged and deeply saddened by the news that my friend Abe Shinzo, former Prime Minister of Japan, was shot and killed while campaigning."

Abe, 67, died after being shot during a speech in Nara, Japan.

"Above all, [Abe] cared deeply about the Japanese people and dedicated his life to their service. Even at the moment he was attacked, he was engaged in the work of democracy," Biden said in a statement released by the White House. "While there are many details that we do not yet know, we know that violent attacks are never acceptable and that gun violence always leaves a deep scar on the communities that are affected by it. The United States stands with Japan in this moment of grief. I send my deepest condolences to his family."

In recognition of Abe's death, Biden has ordered that the American flag at the White House and on other federal grounds be flown at half-staff until July 10.

Biden told reporters Friday afternoon that he reached out to Japanese Prime Minister Fumio Kishida and plans to stop by the Japanese embassy to sign a condolence book later in the day.

"I tried to put a call in to the present Prime Minister, and he was -- it was very late there at night. ... I'm going to be stopping by to sign the condolence book in the Japanese embassy on the way to the CIA," Biden said.

The President said that the weapon used in Abe's murder "was a homemade weapon" and underscored the rarity of gun-related deaths in Japan compared to the US.

Japan reported only one death due to firearms in 2021, according to the National Police Agency. A total of 10 firearm-related incidents were reported in the country in 2021 — up from seven in 2020.

Abe's death, the President argued, was unlikely to have "any profound, destabilizing impact on Japanese security or Japanese solidarity."

Abe was a close ally to US Presidents Barack Obama and Donald Trump. His relationship with Trump was especially notable given the Republican President's attempt to warm relations with North Korea and the generally chilly reception he received from other world leaders.

Trump eulogized Abe in a pair of posts to Truth Social Friday morning, calling his death "a tremendous blow to the wonderful people of Japan."

"Few people know what a great man and leader Shinzo Abe was, but history will teach them and be kind," Trump wrote. "He was a unifier like no other, but above all, he was a man who loved and cherished his magnificent country."

The former President also called for Abe's assassin to be "dealt with swiftly and harshly."

Abe was the first world leader to meet with then-President elect Trump in 2016 in New York City, just two weeks after the Republican was elected. Trump hosted Abe twice in Florida during his first term, bonding over their shared love of golf while playing together at Mar-a-Lago. In 2019, Japan returned the favor by hosting a lavish state visit for Trump and his family. Abe also arranged for Trump and his wife Melania to attend a traditional sumo wrestling match, where he was awarded the "United States President's cup."

Abe visited Hiroshima with then-President Obama in May 2016, who was the first sitting president of the US to visit the city where the first atomic bomb was dropped in 1945. Later that year, Abe would become the first prime minister from Japan to visit Pearl Harbor with a US president when he visited the base with Obama.

Obama on Friday said he was "shocked and saddened by the assassination of my friend and longtime partner."

"Former Prime Minister Abe was devoted to both the country he served and the extraordinary alliance between the United States and Japan," Obama wrote on Twitter. "I will always remember the work we did to strengthen our alliance, the moving experience of traveling to Hiroshima and Pearl Harbor together, and the grace he and his wife Akie Abe showed to me and Michelle."