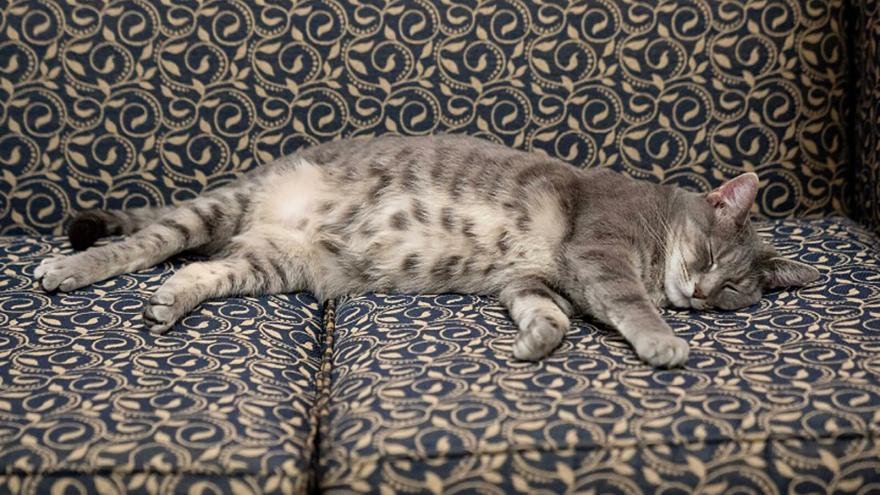 A farm cat from Pennsylvania, Willow made quite an impression on Dr. Biden in 2020 when she jumped up on the stage and interrupted her remarks during a campaign stop.

(CNN) -- The White House is putting the first pets on display for National Pets Day.

The Biden's family cat, Willow, was captured doing "work" around the White House in a video posted to The Dodo's social media on Monday.

The video, which was shot in coordination with the East Wing, outlines the short-haired gray tabby's three jobs, which include testing the "nap capacity of every single desk," keeping a "very close eye on the White House birds" through a window and searching "every room for treats."

"Willow has made herself right at home at the White House," the caption reads. The video also shows the first lady playing with Willow in the East Colonnade and it includes footage from the first time they met.

Willow first caught Biden's eye at a campaign stop in 2020, according to information provided by the first lady's press secretary Michael LaRosa, when the cat jumped on stage and the owners of the farm where the event was being held noticed the "immediate bond" they shared.

She officially moved into the White House in January and her name was inspired by the first lady's hometown of Willow Grove, Pennsylvania.

The Bidens' also have a puppy named Commander that they added to their family in December after their beloved German Shepherd, Champ, died in June at the age of 13.

Their other German Shepherd, a rescue named Major, has been living away from the White House after a handful of aggressive incidents involving staff at the White House.