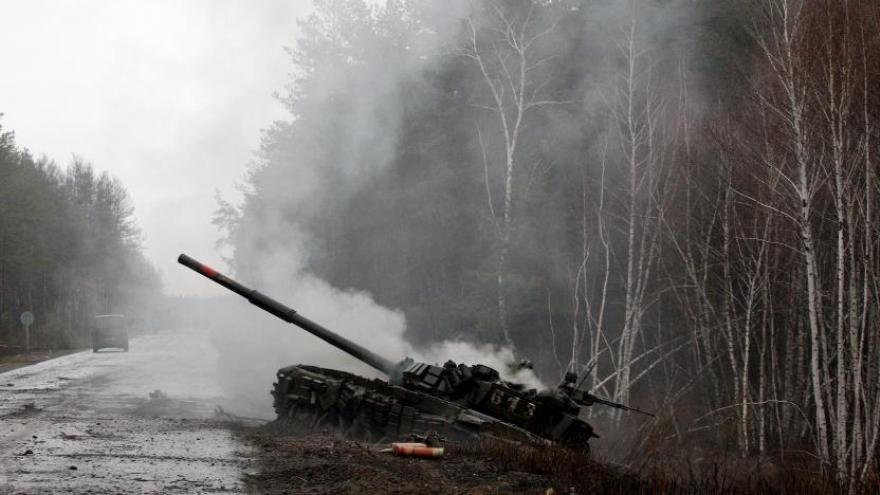 Smoke rises from a Russian tank destroyed by the Ukrainian forces on the side of a road in Lugansk region on February 26.

(CNN) -- Nearly three weeks into Russia's invasion of Ukraine, the Biden administration is still assessing the most effective way to get military aid into the country without triggering a wider war.

While administration officials say the effort to provide Ukrainian forces with American-made weapons such as Javelin anti-tank and Stinger anti-aircraft missiles has been largely successful, the White House is under intense pressure to do more.

Specifically, both Congress and Ukrainian President Volodymyr Zelensky have pressured Biden officials to help broker the transfer of heavier Soviet-made weaponry to Ukraine, including MiG fighter jets and S-300 surface-to-air missile systems. It's a message that Zelensky could echo on Wednesday when he addresses Congress.

But so far the Biden administration has opted not to help provide those heavier, Soviet-made weapons systems. US officials continue to grapple with concerns about how Russia might respond if certain weapons transfers are approved. Officials have also raised questions about how useful MiG fighters would be, and whether they are worth the risk.

The State Department has been working to identify which countries currently have the Soviet-made S-300 air defense systems and is examining how they could be transferred to Ukraine, sources said. But it remains unclear how the US would backfill those countries' supplies of surface-to-air missiles, according to multiple sources familiar with the discussions.

A similar problem arose last week, when Poland indicated it would be willing to send MiG-29 fighter jets to Ukraine, with the US telling Poland it would be unable to backfill the jets quickly.

But a Republican Senate aide told CNN on Monday that Congress had solved that problem for the White House when it passed a long-delayed $1.5 trillion spending bill last week. That package included more than $13 billion in money to respond to Russia's invasion of Ukraine, including funding to directly backfill allies and partners who have delivered weapons to Ukraine from their own stocks.

"That's where we should urge the administration to work with allies and partners, not just in Europe but potentially around the globe, who are in a position to deliver more munitions for things like the S-300 or other advanced air defense systems that we can work with to backfill their own capabilities," the aide added.

Almost all of the $350 million in weapons the Biden administration approved for Ukraine in late February have been delivered, according to multiple sources familiar with the status of the arms shipments. Over the weekend, President Joe Biden approved an additional $200 million military aid package for Ukraine, which includes more Javelin and Stinger missiles, two sources familiar with the matter told CNN.

US officials have told Congress that the weapons they are sending to Ukraine are getting where they are supposed to go, according to sources familiar with the matter. But two sources tell CNN that the NATO alliance has very little idea what percentage of the military assistance is actually getting into the hands of Ukrainian forces after it crosses NATO and European territory.

NATO doesn't know because, deliberately, these shipments are being arranged by countries bilaterally -- directly with Ukraine -- and not through the alliance, the sources said. Nations have been told not to discuss with one another what they are sending and how.

This is partly for security reasons, because Western officials don't want Russians to target the convoys, and informing the 30-country bloc of the transit points would increase the risk of such information leaking. But it also allows NATO to credibly say that as a bloc, it is not providing lethal assistance to Ukraine.

Funneling weapons into Ukraine may also prove to be more complicated going forward as the Kremlin made clear over the weekend that Russian forces will now target US shipments flowing into the country.

That warning, coupled with Russia's recent strike on a military base in western Ukraine, is raising concerns about Moscow's willingness to target aid shipments crossing the border from neighboring countries. NATO still does not believe, however, that Russia would target shipments still inside NATO or European Union member countries.

Targeting arms shipments would be difficult for Russia, a source familiar with the intelligence added. It would need exact information on when and where the shipments are entering the country -- and have to cope with the added challenge that many are likely being transported under cover of darkness.

Still, the strike appeared to be part of a messaging campaign by Russia, the source said, warning the West against continuing its military assistance to Ukraine.

Pentagon spokesman John Kirby said Monday that the base was not being used as a transit point for shipments of weapons and US efforts to provide security assistance were not disrupted. But a second NATO source told CNN that the strike was concerning to the bloc, due to its proximity to Western countries that are sending materials into Ukraine.

With the latest strike "it certainly appears as if the Russians are broadening their target set," Kirby added, noting the weekend attack is just the latest sign that Russian President Vladimir Putin is not only sending a message about shipments of weapons into the country but also that he "clearly has the occupation of Ukraine in mind."

As a result, the Biden administration now faces a delicate balancing act as it considers ways to expedite weapons shipments to Ukraine and address another concerted push by lawmakers to provide additional defense capabilities, including the S-300.

Pressure from the Hill

In the meantime, lawmakers on both sides of the aisle are urging the Biden administration to step up its efforts to deliver more weapons to Ukraine.

On Monday, the Senate's No. 2 Democrat, Sen. Dick Durbin of Illinois, told CNN he got an earful from Ukrainian American constituents this past weekend over the Biden administration's decision to oppose providing Polish MiG-29 jets to Ukraine.

"I went to a rally yesterday where that was the number one issue with the Ukrainian Americans, to give back the skies to the people of Ukraine and stop it," Durbin said. "And I had to think in the context, as President Biden said in Philadelphia and said to us here in Washington, he doesn't want to risk world war III. It's a terrible, terrible decision that he faces, but I'm going to stand by him and work with him to do the right thing."

One lawmaker said the public attention in Congress pushing for the Polish MiG-29 jets has been misplaced, arguing that Ukraine already has planes it isn't flying, it doesn't have enough pilots to fly more planes and the country's runways have been damaged by Russian attacks.

"The controversy over the MiGs is a classic case of Congress focusing on the shiny object instead of what will actually matter," the lawmaker said. "The things that will really matter are the S-300s, SAMs (surface-to-air missiles) and drones. DoD is looking at ways to get them from allies, since we don't have any we can give directly."

Senators have been publicly pushing for the Biden administration to change course on the Polish fighter jets since the opposition was announced last week. GOP Sen. Rob Portman of Ohio, who was in Poland on Sunday on a congressional trip just miles from the Ukrainian border, pushed back on the notion that the MiG-29 fighters would cause an escalation with Russia during an interview on CNN's "State of the Union."

"I don't know why that would be true," Portman said. "You know, the Russians have complained about everything. Vladimir Putin has said that the sanctions are an act of war. They certainly complained when we provided Stingers directly from the US government, which can knock down an airplane and have been successful in doing that at lower altitudes."

But Senate Armed Services Chairman Jack Reed, a Rhode Island Democrat, said the plan to provide Ukraine with MiG-29 fighter jets "would not be effective."

"They already have approximately 30 aircraft. They have problems with maintaining and flying those aircraft," Reed said. "The real advantage would be to move in air defense missiles, which I hope they will do, because particularly some of the older ones, Soviet-era, they understand how to use them, since they've trained on them."

The source familiar with the intelligence also told CNN that providing MiG fighter jets does not make a lot of operational sense. The aircraft present a big target and they are hard to move, which creates a myriad of logistical, operational and security problems.

There are also operational security concerns around disclosing details about shipments of weapons to Ukraine, according to a senior defense official, who told reporters on Monday that the Pentagon is being very "careful and cautious about talking about this."

"We haven't put out specifics on the inventory. There are certain systems we still have not acknowledged ... that they're getting. We don't give out numbers, we don't give out timing of the shipments, we don't provide context on the locations or the ground routes on which it's arriving, because we want to keep that security assistance flowing as much and as fast as it can to assist them in the fight," the official said.