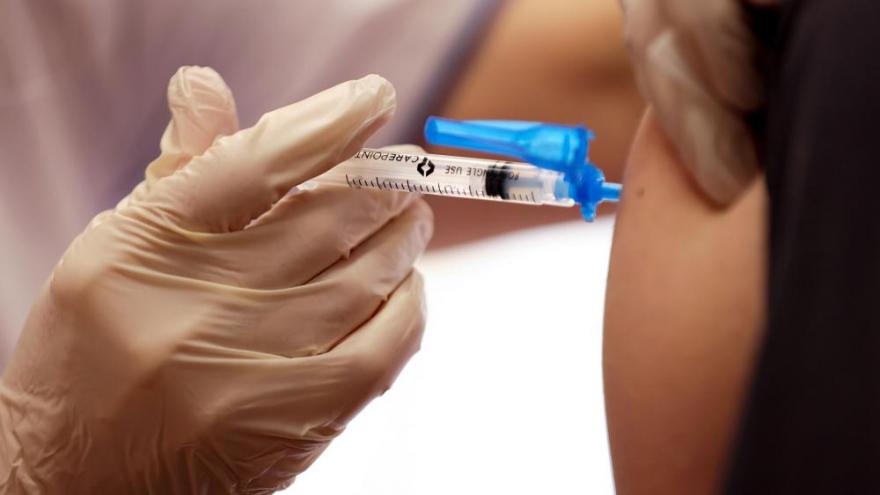 White people are getting vaccinated at higher rates than Black and Latino Americans. A dose of the Moderna Covid-19 vaccine is administered in the Mission Hills neighborhood of Los Angeles on January 7.

(CNN) -- Black and Latino Americans are receiving the Covid-19 vaccine at significantly lower rates than White people -- a disparity that health advocates blame on the federal government and hospitals not prioritizing equitable access.

Black and Latino Americans are already dying of Covid-19 at three times the rate of White people and being hospitalized at a rate four times higher, according to the US Centers for Disease Control and Prevention.

CNN's findings come as the government struggles with vaccine supply shortages and a chaotic rollout that has caused delays in vaccinating the elderly. The federal government has recommended that states open up vaccination to more groups of people, including everyone 65 and older. Initial guidance from the CDC had suggested health care workers and elderly in long-term facilities be the first to receive the vaccine.

Health experts and advocates say the federal government can help alleviate the disparities by strengthening partnerships with leaders and churches in Black and Latino communities -- and be intentional about not leaving people of color out of vaccination efforts.

How to ensure 'everyone gets this'

Hospitals, for example, must ensure their entire workforce, including the food and maintenance staff, receive all correspondence about signing up to get the vaccine, said Dr. Georges Benjamin, executive director of the American Public Health Association.

Black, Latino and Asian Americans make up 41% of health care workers while 59% are White, according to Kaiser. And the majority of workers in long-term health care settings, 52%, are people of color.

Benjamin said the vaccine also needs to be administered outside of traditional hours so people who work hourly, frontline jobs don't have to take off work. Communities, he said, should consider a plan for transporting poor families without vehicles to health facilities to get the vaccine.

Some researchers said it was alarming to have disparities so early in the process when most of the people getting vaccinated are health care workers.

Dr. Fola May, a health equity researcher at the UCLA Kaiser Permanente Center for Health Equity, said she would expect health care workers to be the most informed and the least hesitant about science.

May fears this could be indicative of bigger racial gaps when the vaccine becomes widely available.

"I think we've botched this," May said. "If we're seeing it in this population that should have the least biases against science, then when we look into the bigger populations we're going to have even fewer people who have the right information and access."

A 'warning flag' about racial inequality

In many states, the number of White people who have been vaccinated exceeds the Covid-19 case count for their racial group, according to the Kaiser Family Foundation. Meanwhile, Black and Latino people have fewer vaccinations than their case and death counts in some of those same states.

For example, in Pennsylvania Black people make up 13% of Covid-19 deaths but only 3% of vaccinations.

Pennsylvania also has the most striking disparity: White people have been vaccinated at four times the rate of Black people when accounting for the population of each racial group, the CNN analysis found.

Andrea Custis, president and CEO of the Urban League of Philadelphia, said the vaccine data in Pennsylvania raises a "warning flag" about racial inequality and the federal government should address it with urgency.

Custis said she believes the Black community is becoming less hesitant about the vaccine after seeing other Black Americans receive the shot and administer it. Last month, a Kaiser study found that more than a third of Black Americans would probably or definitely not get the vaccine if it was determined to be safe by scientists and widely available for free.

But Custis said if the federal government allows "trust messengers" to help roll out the vaccine and educate the public, Black people will get the shot.

"The ones who are dying, the ones who need it are Black folks," Custis said. "Everybody needs it, but you've got a fire going in the Black community and you need to be running to the community to vaccinate them."

What Biden's 5-point plan means for Black and Latino people

Black pastors and community advocates are also urging President Joe Biden's administration to act swiftly in its promise to reach communities of color with the vaccine and lean on them for help doing it.

"I think the biggest problem we have with the vaccine is the distribution methods and the availability," said Debra Fraser-Howze, founder of Choose Healthy Life -- a national group of Black pastors who are fighting the pandemic's impact on the Black community. "All of the real estate in the community should be used."

Fraser-Howze said former President Donald Trump's administration failed to partner with Black churches and trusted leaders that could help administer the vaccine and reach the people of color who qualify for the first phases but are hesitant or don't know where to get the shot. She said she is confident Choose Health Life and other Black advocacy groups could help boost the number of Black people getting vaccinated.

Biden and his administration have released details of an ambitious national vaccination strategy with the hopes of combating concerns with vaccine access and hesitancy among people of color.

"We are going to make sure there are vaccination centers in communities hit hardest by the pandemic, in Black and Latino communities and rural communities as well," Biden said.