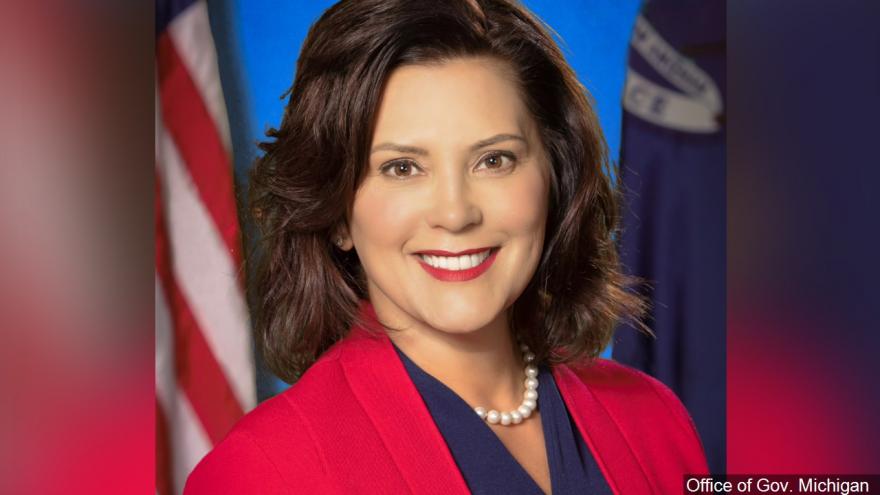 (CNN) -- Gretchen Whitmer, the Democratic governor of Michigan, focused on health care and American workers when she delivered the party's response to President Donald Trump's State of the Union address Tuesday, putting a spotlight on the bread-and-butter issues that Democrats hope will resonate with the American public in the wake of impeachment.

"Democrats are trying to make your health care better. Republicans in Washington are trying to take it away," Whitmer said in her speech.

She spoke about health care in personal terms, describing how she had fought against an insurance company after her mother was "wrongly denied her coverage for chemotherapy."

Whitmer also made an economic appeal, saying, "American workers are hurting. ... Wages have stagnated, while CEO pay has skyrocketed."

White House officials had said Trump would stress a strong US economy in his remarks Tuesday night. Taking on the President directly, Whitmer said, "It doesn't matter what the President says about the stock market. What matters is that millions of people struggle to get by or don't have enough money at the end of the month after paying for transportation, student loans, or prescription drugs."

The rebuttal put a spotlight on Whitmer, whom the Democratic Party chose to elevate by giving the speech, as well as Michigan itself, a state that Democrats lost to Trump in the 2016 election and that had previously been part of the Democratic Party's so-called "blue wall." Michigan will be fought over as a battleground state in the 2020 election.

Whitmer was elected governor in 2018 after campaigning on a promise to "fix the damn roads," and her speech served as a way for Democrats to refocus the national political conversation on issues and policies they want to prioritize following the State of the Union and gave the party a chance to draw contrasts with the President.

"All across the country, Democratic leaders are rebuilding bridges, fixing roads, expanding broadband and cleaning up drinking water," Whitmer said in her speech, before taking a swipe at the President by saying, "Bullying people on Twitter doesn't fix bridges -- it burns them. Our energy should be used to solve problems."

Whitmer also addressed the Senate impeachment trial, which is on track to culminate in a final vote on Wednesday.

"As we witness the impeachment process in Washington there are some things each of us, no matter our party, should demand," she said.

"The truth matters. Facts matter. And no one should be above the law. It's not what those senators say tomorrow, it's what they do that matters."

"Remember: Listen to what people say, but watch what they do," she said. "It's time for action."

Whitmer wasn't the only Democrat to deliver a response to the President's address.

Democratic Rep. Veronica Escobar of Texas was tapped to deliver the Spanish-language response at a family health center in El Paso, Texas.

Escobar similarly kept the focus on health care and the economy.

According to a transcript of her speech as prepared for delivery and translated into English, Escobar said, "Republicans across the nation are actively fighting to dismantle benefits that save lives, working in the courts to eliminate every last protection of the Affordable Care Act, including protections for the 130 million people with pre-existing conditions. Democrats are fighting back."

And she said, "Democrats also know that too many families are struggling to get by in our economy. President Trump's economic policies have created inequality that is creating two Americas: one where the wealthiest 1% benefit and one that leaves too many farmers, businesses, and working families behind."

Massachusetts Democratic Rep. Ayanna Pressley also gave a rebuttal of her own on behalf of the progressive Working Families Party.

Pressley, who has endorsed Sen. Elizabeth Warren in the Democratic primary, told CNN last week that she considered her speech "a love letter to the activists and the foot soldiers who have made (progressive) victories possible and who will continue to make victories possible."

Pressley made the case for progressive touchstone policies like "Medicare for All" and the Green New Deal, while also directly addressing the President.

Pressley acknowledged the impeachment trial, but argued that the President presents a threat to the fabric of the country that goes beyond the alleged high crimes and misdemeanors at the center of those proceedings.

"Since he was sworn into office more than three years ago, Donald Trump and his administration have attacked our communities with racist, xenophobic, hateful rhetoric, and even more bigoted, destructive policy," Pressley said. "For Donald J. Trump, the cruelty is the point."

Sen. Bernie Sanders, a Vermont independent and 2020 Democratic presidential candidate, will be delivering a State of the Union rebuttal of his own from Manchester, New Hampshire, ahead of next week's primary in the state.