WHO: Ebola outbreak in Congo still not international health emergency 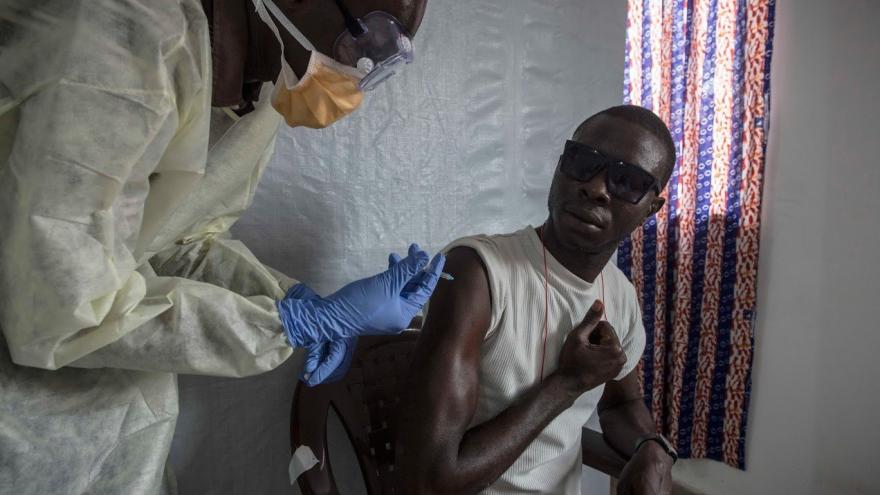 On 23 March 2015, MSF (Médecins Sans Frontières) together with WHO (World Health Organisation) started a clinical trial in Guinea to test the safety, efficacy and capacity substance to provoke an immune response of the vaccine called rVSV-EBOV against Ebola. Source: MSF
By Susan Scutti, CNN

(CNN) -- The Ebola outbreak in the Democratic Republic of Congo does not constitute a public health emergency of international concern, the World Health Organization said Friday.

In announcing the decision by the committee, Dr. Preben Aavitsland, the acting chair of the emergency committee, said "possible unintended consequences" and risks of an emergency declaration had been "extensively debated" by the committee members. Possible risks include border closures and restrictions on travel and trade that could "severely harm the economy" in Congo, he said. "This is not a global emergency. This is an emergency for [Congo] and it may affect neighboring countries."

Ultimately, the committee decided there was "potentially a lot to lose" by declaring a public health emergency, said Aavitsland, who emphasized that funding is needed to continue efforts to contain the outbreak.

The international community must "step up funding and strengthen support" for preparedness in Congo and neighboring countries, he said.

Crisis in a conflict zone

The outbreak, which began in August, is the second largest and second deadliest on record with 2,108 total cases and 1,411 total deaths as of Thursday, according to Congo's Ministry of Health. The totals include confirmed cases and deaths that occurred earlier this week in Uganda. A 2014 outbreak in West Africa killed more than 11,000 people, according to WHO.

The epicenter of the outbreak is North Kivu and Ituri provinces, among the most populous in the nation and bordering Uganda, Rwanda and South Sudan, according to WHO.

Health officials announced this week that the outbreak crossed the border from Congo to neighboring Uganda.

Unlike the West African outbreak, bursts of violence, burning of Ebola treatment centers abductions of of health workers have plagued the current response effort. As of May 21, there have been 131 attacks on health care personnel in Ebola-affected areas, according to WHO.

Dr. Jeremy Farrar, director of the Wellcome Trust, which funds medical research, said: "I respect the advice of the Emergency Committee but do believe a Public Health Emergency of International Concern would have been justified." Such a declaration would have "raised the levels of international political support which has been lacking to date, enhanced diplomatic, public health, security and logistic efforts as well as released more financial resources to support the incredibly brave and committed teams working in North Kivu."

Gwenola Seroux, emergency cell manager at Médecins Sans Frontières (Doctors without Borders), said in a statement "it is clear that the outbreak is not under control and therefore we need a better collective effort." The medical humanitarian organization, which had been working at the epicenter alongside WHO since the start of the current outbreak, suspended some of its medical activities in March following separate attacks on its Ebola treatment centers in Butembo and Katwa earlier this year.

Lawrence O. Gostin, a professor of global health law and director of the WHO Collaborating Center on Global Health Law at Georgetown University, told CNN in an email that "the international community has lacked any sense of urgency, essentially allowing WHO's Health Emergency Department and a few NGOs to fight the Ebola battle in [Congo]. This has come with enormous risk to safety and life for first responders."

Other characteristics of the epidemic

The current Ebola epidemic is caused by the most deadly strain, Zaire Ebola virus, which is the same one that affected West Africa during the 2014-2016 outbreak. Six months into that outbreak, a total of 1,711 probable cases of Ebola had been reported when a public health emergency of international concern was declared on August 8, 2014, for the West Africa Ebola epidemic.

Despite similarities between the two epidemics, there are important differences including the fact that long-term conflict smolders at the epicenter of the current outbreak, where at least 50 armed groups cause intermittent violence, according to WHO.

For this reason, the US State Department has not allowed the US Centers for Disease Control and Prevention to deploy staff to the epicenter. The CDC has staff in-country, at a distance from the epicenter, and does not provide information regarding location in order to protect the privacy and safety of health care professionals. The agency announced this week that it activated its emergency operations center in Atlanta to provide additional support for the outbreak response.

Gostin said that "responders are facing intense violence along with deep community mistrust. They can't get into the hot zone due to escalating violence."

Add to that, more than a million refugees and internally displaced people are traveling through and out of North Kivu and Ituri, according to WHO.

As was feared and expected the outbreak was confirmed to have crossed the border this week.

Yet five sickened family members were repatriated from Uganda to Congo and no additional cases of Ebola identified in Uganda at this time, the Congo Ministry of Health stated on Thursday.

Farrar said: "The confirmation of new Ebola cases in Uganda is tragic but unfortunately not surprising. Uganda is very well prepared... but we can expect and should plan for more cases in DRC and neighboring countries. This epidemic is in a truly frightening phase and shows no sign of stopping anytime soon."

Still, hope comes in the form of research advancements. Experimental treatments and vaccines, which were not available during the West African outbreak, have been used in Congo -- another striking difference from the 2014 West Africa outbreak, which had no vaccines and the only treatment options had not yet been used in humans.

To date, 585 patients have recovered from the illness, and more than 133,000 vaccines have been administered, which many believe has helped limit the spread of the outbreak.

The rVSV-ZEBOV experimental vaccine, manufactured by Merck, was approved by Congo's health ministry ethics committee for use in country in May 2018; Farrar is calling for the deployment of an Ebola vaccine, made by Johnson & Johnson, which is still under development.

In its announcement on Friday, the emergency committee recommended all at-risk countries put in place the necessary approvals for using experimental medicines and vaccines as part of their preparedness.

Seroux stated that "what is most important now if we want to gain control of this epidemic is to change the way we are dealing with it. We need to adapt our intervention to the needs and expectations of the population, to integrate Ebola activities in the local healthcare system, to engage effectively with the communities, and to further explore promising vaccinations to strengthen prevention."

WHO Director-General Dr. Tedros Adhanom Ghebreyesus said he would not hesitate to reconvene the emergency committee if needed.

"Although the outbreak does not at this time pose a global health threat, I want to emphasize that for the affected families and communities, this outbreak is very much an emergency," he said. "We also need the international community to step up its financial commitment to ending the outbreak."