Who is Russia's top field commander in Ukraine? The US isn't sure. 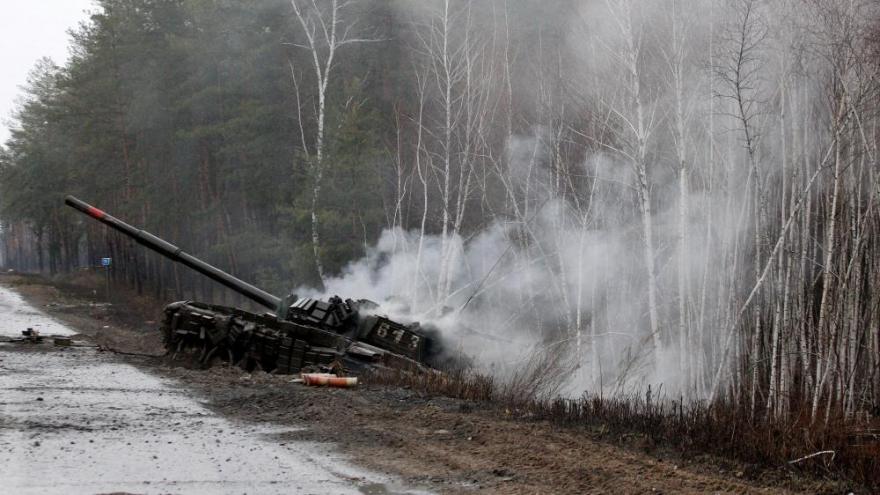 Smoke rises from a Russian tank destroyed by the Ukrainian forces on the side of a road in Lugansk region on February 26. Russia on February 26 ordered its troops to advance in Ukraine "from all directions" as the Ukrainian capital Kyiv imposed a blanket curfew.

(CNN) -- The US has been unable to determine if Russia has designated a military commander responsible for leading the country's war in Ukraine, according to multiple sources familiar with the matter — something that current and former defense officials say is likely a key contributor to the apparent clumsiness and disorganization of the Russian assault.

Without a top, theater-wide commander on the ground in or near Ukraine, units from different Russian military districts operating in different parts of Ukraine appear to be competing for resources rather than coordinating their efforts, according to two US defense officials.

Units participating in different Russian offensives across Ukraine have failed to connect, these sources say, and in fact, appear to be acting independently with no overarching operational design.

Russian forces also appear to be having significant communication issues. Soldiers and commanders have at times used commercial cell phones and other unsecure channels to talk to each other, making their communications easier to intercept and helping Ukraine develop targets for their own counterstrikes.

It's all led to what these sources say has been a disjointed — and at times chaotic — operation that has surprised US and western officials.

"One of the principles of war is 'unity of command,' said CNN military analyst retired Lt. Gen. Mark Hertling, a former commander of the US Army in Europe. "That means someone has to be in overall charge— to coordinate fires, direct logistics, commit reserve forces, measure the success (and failure) of different 'wings' of the operation and adjust actions based on that."

Historically, there have been instances in which Russia has publicized this kind of information, but the Ministry of Defense has not made any reference to a top commander for operations in Ukraine and did not respond to CNN's request for comment on the topic.

And while it is possible that Russia has quietly designated a top commander to oversee the invasion — even if the US has been unable to identify that individual — the state of combat operations would suggest "he's inept," according to Hertling.

The Russian invasion has also been marked by an inordinate number of casualties among high-ranking Russian officers.

The Ukrainians say they have killed five Russian generals during the first three weeks of the war, a claim CNN has not independently confirmed. Still, any military general being killed in combat is a rare event, Retired US Army Gen. David Petraeus told CNN's Jake Tapper during Sunday's State of the Union.

"The bottom line is that their command and control has broken down," said Petraeus.

The sheer size of the invasion has only made things worse. Coordinating operations along a front that measures over 1,000 miles requires "extensive communication capability and command, control and intelligence resources that the Russians just don't have," Hertling added.

"The Russians have had tremendous difficulties with command and control during this operation at all echelons," echoed a US source familiar with the situation on the ground. "Some of this may be due to actions by the Ukrainians themselves."

On the ground, Russian troops in the field have often been cut off from their senior commanders, sources said.

"The guys in the field go out and they have their objective, but they have no way to radio back [if something goes wrong]," said another source familiar with the intelligence, who added that western officials believe this is part of the reason that some Russian troops have been observed abandoning their own tanks and armored personnel carriers in the field and simply walking away.

Since Russia launched its assault on Ukraine on Feb. 24, it has bombarded Ukrainian cities with missiles and artillery, destroying apartments, hospitals and schools and leaving scores of civilians dead. But its ground invasion has largely stalled amid fierce resistance from the Ukrainians and what senior defense officials have described as tactical errors.

The airspace over Ukraine remains contested and Russia has failed to take control of any major cities, including Kyiv.

US Defense Secretary Lloyd Austin on Friday told CNN's Don Lemon that the US has "seen a number of missteps" by Russia. Moscow has "struggled with logistics," he said, adding that he has not seen evidence of "good employment of tactical intelligence" nor "integration of air capability with a ground maneuver."

Both current officials and outside analysts point out that although Russia has deployed its military in other recent conflicts, including in Syria and in Crimea in 2014, it has not tried anything even remotely as ambitious as a full-scale invasion of a large nation like Ukraine that would require air and ground integration and coordinated effort by units from multiple different military regional districts.

Russia rotates its annual military exercises between its regional military districts, Hodges said — rather than conducting the kind of so-called "joint" exercises that the United States routinely employs to ensure smooth coordination between disparate pieces of its sprawling military.

"They don't have any experience at this, not at this kind of a scale," he said. "It's been decades since they would have done something on this scale. What they did in Syria and Crimea in 2014 is nothing compared to this."

And, he added, "It doesn't seem to me that they've actually exercised this in a way that would have demonstrated that they would have to have a joint operational commander."

Some officials have also suggested that Russian President Vladimir Putin kept planning for the overall operation so closely held within the Kremlin that many of his own military commanders in the field didn't fully understand the mission until the last minute — likely preventing different arms of Russia's military from coordinating effectively in the run-up to the invasion.

"In the assessments we see it is clear some people on the [Russian] defense side are not really understanding what the game plan is," a senior European official said in early February, just weeks prior to the invasion. The official added that the assessments suggest the defense personnel think "it's a very difficult game plan to stand up."

The lack of central organization also has implications for Russia's efforts to resupply its forces. Moscow has struggled to provide sufficient food, fuel and munitions to troops in the field — and as its casualties have mounted, officials say there are indications that Russia is seeking to replenish its losses with both foreign fighters and existing Russian troops stationed elsewhere.

"That's the job of the joint force commander: to allocate priorities," he said. "Who gets the priority for fuel, ammunition or particular capability."