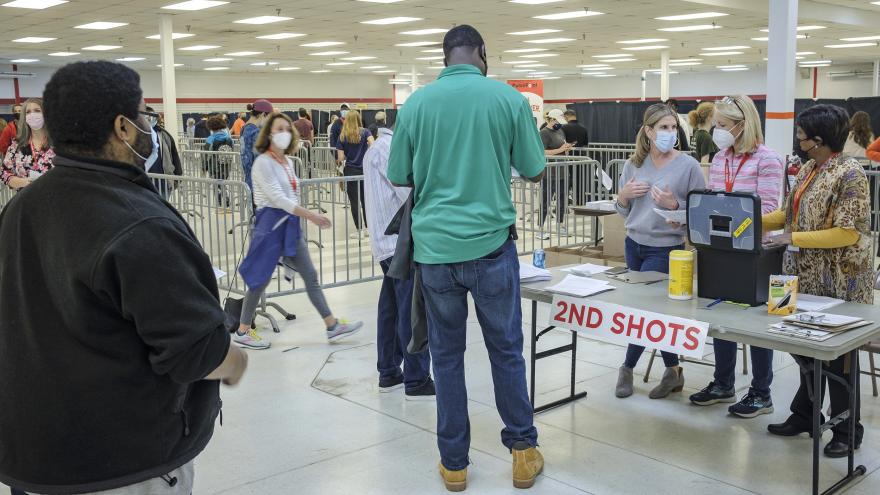 Two of the Covid-19 vaccines in use in the United States -— the Pfizer/BioNTech and Moderna vaccines — require that people get a second dose to get the maximum protection the vaccines can provide. - Carlos Bernate/Bloomberg/Getty Images/FILE

(CNN) -- When the US Centers for Disease Control and Prevention recently reported that almost 8% of the millions who have received the first dose of a Covid-19 vaccine hadn't returned to get the second shot they need, it raised concerns that the country might not be able reach herd immunity.

But health experts say what's most surprising is how low that number is, and that it points to the need to inform people about the importance of that second shot for their own protection and that of others in a pandemic -- and to let them know that it's not too late to get it.

Two of the vaccines in use in the United States -— the Pfizer/BioNTech and Moderna vaccines — require that people get a second dose to get the maximum protection the vaccines can provide.

It's not unusual for people to forgo a required second shot of a vaccine, health experts say. The skip rate for the second shot of the vaccine that prevents shingles, for example, was about 26% among Medicare beneficiaries, according to a Kaiser Family Foundation analysis.

"I am concerned about each individual who is not coming back for a second shot of course, but I actually would have thought that there would be a higher rate of people not coming back," said Dr. Leana Wen, a CNN medical analyst. "Based on what we know from other vaccines, there is a drop off for a whole number of reasons."

The CDC said the number of people missing doses — 5 million — may not be exact. If a person got the two doses from different reporting entities — for example, first from a state-run clinic and then from a local health clinic — the two doses may not have been linked by databases, a CDC spokeswoman said.

"The reasons behind the delayed or missed second doses, however, require further analysis," the spokesperson said, and officials should work to understand whether this is due to access or vaccine hesitancy.

Reasons and excuses people give for skipping the second dose

Several people have reported that they got their second shot at a different place than their first, and administrators at the first site contacted them repeatedly about making an appointment for a second shot, which had already been administered elsewhere.

But some people are certainly missing their second dose. Fear of the side effects of the second dose -- which are reportedly more severe than after the first dose for some people -- along with trouble getting an appointment and finding the time for it are among the reasons people have given for missing second doses.

The second shot for the Pfizer vaccine is supposed to be administered 21 days after the first. For the Moderna, the second dose is 28 days later.

When Dr. Ashish Jha, dean of the Brown University School of Public Health, got his second shot, "it was on a day that was horribly inconvenient, and I tried to move it around. They're like: You got to show up on this day at this time," he said.

"I don't think it's people hesitating or not wanting to get it," Jha said. "It's hard to get this stuff, and two shots in a row."

One fix: Make it easier to get that second shot

"I think what we really need to work on is making vaccination the easy and convenient choice," Wen said. "Anything we can do to get vaccines out to doctors' offices, to pharmacies, to workplaces, to schools, wherever it is that people are, is really important."

Within the St. Luke's University Hospital Network in Pennsylvania, the success rate in getting people fully vaccinated is at 99%, said Dr. Jeffrey Jahre, an infectious diseases expert there, in part because the network made it easy to get the second appointment, assigning it when the first shot was given.

The network then followed up with multiple reminders of the appointment -- five days out, three days out and then the day before -- and those who were unable to keep that appointment were "given an easy methodology of changing it," Jahre said.

More than 43% of the US population has had at least one shot of a vaccine, and 30% are fully vaccinated, according to CDC data. And in many places around the country, it's getting easier all the time to get vaccinated as supply increases and demand slackens.

But another reason people may be skipping the second dose is not understanding the importance of it or being misinformed. And that may be harder to fix.

Some people skip the second shot because they think the first one offers them sufficient protection, Wen said.

Some people say, "Oh, I'm fine. I'm not that much at risk, so I just need one vaccine," Wen said. "And then some people believe that one vaccine will give them, somehow, enough protection. The second one is just for good measure. That's not true."

"I don't want them to be walking around thinking that they have immunity from Covid-19, when actually they don't, because they only got the one dose," Wen said.

In fact, most Americans may be misinformed about the timing of immunity after vaccination, according to a new commentary published Wednesday in the New England Journal of Medicine.

The authors analyzed results from a survey of 1,027 US adults taken between February 11 and 15 through a panel created by the National Opinion Research Center.

About 20% of those surveyed believed the vaccines gave recipients strong protection after the first dose, and another 36% were unsure.

Just 44% of vaccinated people reported that the vaccines conferred "strong protection" one to two weeks after the second dose, as the CDC guidelines state.

"Despite current efforts, many Americans, including many of those who have already received a first vaccine dose, remain confused about the timing of protection and the necessity of a second dose," the authors wrote.

Earlier this year, there was a public debate among health officials about delaying second doses to focus on building partial immunity to a larger swath of the population before giving everyone the second dose. That debate may play a part in the public's lack of understanding the importance of the second dose, the authors said.

In fact, the first dose just "primes the immune system, then the second shot sort of boosts it. This makes it a better option for obtaining immunity," as CNN Chief Medical Correspondent Sanjay Gupta explained it when the vaccines were first authorized for emergency use.

While there is some protection after the first shot, it's not clear how long that lasts, and it is nowhere near what full immunization offers.

"There's a 36-fold difference of getting fully vaccinated versus partially," Dr. Anthony Fauci said at a news briefing Friday.

And then there's the question of whether the country can obtain herd immunity -- meaning 70% to 85% of the population is immune -- if the number of people who don't get a second vaccine dose keeps rising.

"I am concerned about it," said Jahre. "In order to get durability, you need to have that second dose."

And to get to where we want to be in terms of herd immunity, "you need to have durability, you need to have sustainability. And it's very important that people follow through with that second dose," Jahre said.

"It's certainly an issue," Wen said of the 8% not getting a second dose. "We need people to be fully vaccinated for the protection of others as well."

People also need to know, according to Wen and others, is that if you are among the 8% who have gotten only one shot of Moderna or Pfizer/BioNTech vaccine, it may not be too late to get that second shot.

According to the CDC, if it's "not feasible to adhere to the recommended interval and a delay in vaccination is unavoidable," the second dose of both the Pfizer-BioNTech and Moderna vaccines may be administered up to six weeks — or 42 days — after the first dose.