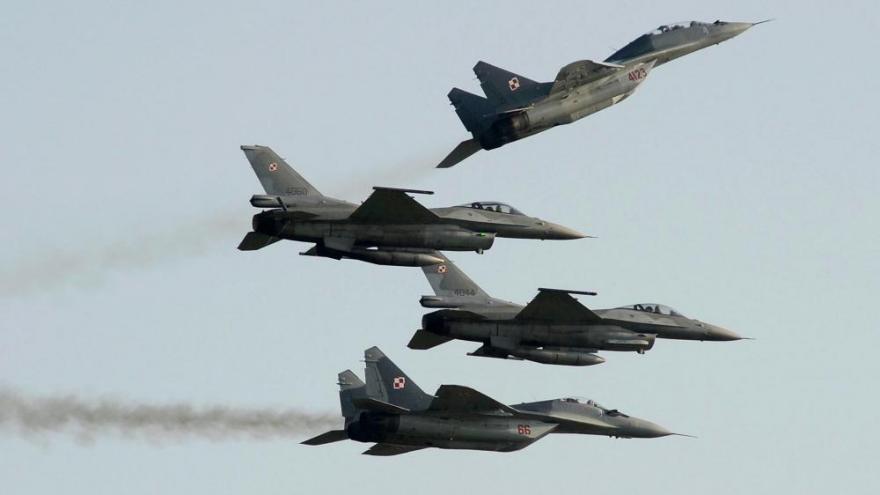 (CNN) -- The Pentagon said Wednesday that it is bluntly opposed to a Polish plan to provide fighter jets to Ukraine.

US Secretary of Defense Lloyd Austin told the Polish minister of defense that the US does not support the transfer of MiG-29 fighter jets to the Ukrainian air force "at this time," Pentagon press secretary John Kirby said, either by Poland transferring them to Ukraine with the US backfilling Poland's fleet or by Poland transferring the MiG-29s to the US to then give to Ukraine.

Austin "stressed that we do not support the transfer of additional fighter aircraft to the Ukrainian air force at this time, and therefore have no desire to see them in our custody either," Kirby said.

His comments come a day after the US rejected a proposal from Poland to send Soviet-era fighter jets to Ukraine by way of a US-NATO air base in Germany.

The US and NATO want to help Ukraine defend itself against Russian troops invading the country, but also avoid being drawn into an outright conflict with Russia.

Ukrainian President Volodymyr Zelensky has been asking the West for MiG-29 fighter jets, which were used during the Cold War and that Ukrainian pilots were trained to use, to maintain control of the skies in his country as it remains under attack by Russia.

Zelensky's other request for help establishing a no-fly zone over Ukraine has been rejected by the US and the alliance, who view it as a move that would pit them directly against Russia. Russian President Vladimir Putin has also warned that he would consider countries imposing a no-fly zone "as participants in a military conflict."

With a no-fly zone off the table, the US has weighed the option of providing support to the Ukrainian military by helping facilitate the delivery of Polish fighter jets to Ukraine. But it has proven to be a thorny political issue and logistically complicated objective.

Over the weekend, the US said it was in discussions with Poland about a potential deal in which Poland would supply Ukraine with MiG-29 fighter jets that Ukraine has requested, and the US would then provide Poland with American F-16s.

Poland, however, on Tuesday took the US by surprise and offered to deploy all its MiG-29 fighter jets to help Ukraine in its fight against Russia -- but by first sending the jets to US Ramstein Air Base in Germany, also a NATO nation.

The US Defense Department rejected the proposal as not "tenable" and deemed it too risky.

"The prospect of fighter jets 'at the disposal of the Government of the United States of America' departing from a U.S./NATO base in Germany to fly into airspace that is contested with Russia over Ukraine raises serious concerns for the entire NATO alliance," Kirby had said in a statement Tuesday.

NATO members have expressed concerns that providing fighter jets to Ukraine -- even if done bilaterally -- could be perceived by Russia as the alliance becoming directly involved in the war, NATO diplomats told CNN.

Poland, a NATO member and neighbor of Ukraine, has also been worried about the risks of sharing the fighter jets with Ukraine, as they don't want to become a party to the conflict and escalate the situation along their border, Polish officials told CNN.

Polish Ambassador to the US Marek Magierowski said Wednesday evening that Poland was "acutely aware" of the consequences involved with its proposal.

"We were under immense pressure on the part of our allies, and public opinion also here in the United States. And we were acutely aware of all technical, legal and diplomatic consequences of such a move, which was risky, of course," Magierowski told CNN's Wolf Blitzer on "The Situation Room."

"That is why we came up with a logical, conscionable solution. Our American partners rejected this proposal, because they have come to the conclusion that it was too escalatory. Well, we understand this, and I believe that we can continue coordinating our joint efforts with our American partners and with other NATO members in order to help the Ukrainians defend themselves as effectively as possible."

If a Russian attack extends into one of the bordering NATO countries, it could trigger Article 5 of NATO's founding treaty, which is the principle that an attack on one member of the alliance is an attack on all members.

If Article 5 is invoked, the US and other NATO members would then be obligated to provide resources to protect a fellow NATO member and could find themselves directly involved in the Ukraine-Russia conflict.

Prior to Kirby stating the Pentagon is strongly opposed to Poland's proposal on Wednesday afternoon, senior administration officials told CNN the US is continuing to consult with Poland and other NATO allies about the possibility of providing fighter jets to Ukraine.

American and Polish officials have held a "number of conversations" since the White House was caught off guard by Warsaw's statement, a US administration official told CNN, adding that the relationship between the two countries remains strong despite the disagreement.

US Vice President Kamala Harris is also traveling to Poland this week and is expected to discuss the issue.

US officials also told CNN that they do not believe the episode precludes reaching some type of agreement that would allow the jets to get to Ukraine.

As of now, though, there are no immediate apparent solutions for the US to facilitate the delivery of jets to Ukraine since rejecting Poland's offer.

"I think what we're seeing is that Poland's proposal shows that there are some complexities that the issue presents when it comes to providing security systems. We have to make sure that we're doing it the right way," Secretary of State Antony Blinken told reporters Wednesday at the State Department headquarters.

The US has made clear that sending jets to Ukraine is a "sovereign decision" for Poland to make, but has been willing to help sort through the challenges.

Besides the political quagmire, there are logistical challenges with sending fighter jets to Ukraine for the US and NATO allies to still work out.

Psaki cited some of the logistical and operational challenges: getting planes into Ukraine in a way that is not escalatory, potentially having to take the planes apart and putting them back together, and ensuring the planes' safe movement amid a war.

She later called it a "serious logistical bottleneck," saying that discussions on the matter are ongoing.

Open-ended questions include how the aircraft would actually be moved from Poland to Ukraine and the number of Ukrainian pilots available, US Ambassador to NATO Julianne Smith told CNN's Christiane Amanpour on Monday.

One idea floated initially was that Ukrainians would travel to Poland to retrieve the fighter jets and fly them back into Ukraine's dangerous air space, which US officials say remains contested.

Ukraine late last month made a request for MiG-29s to Poland, Slovakia and Bulgaria, and Zelensky on Saturday in a call with US lawmakers pleaded for US help in getting the fighter aircraft to his country.

Some of the countries appeared to have a willingness to consider this move before Poland offered to send their MiG-19s. As of Wednesday, US officials are not ruling out talks with those three other European nations as they seek a way to get the fighter jets to Ukraine.