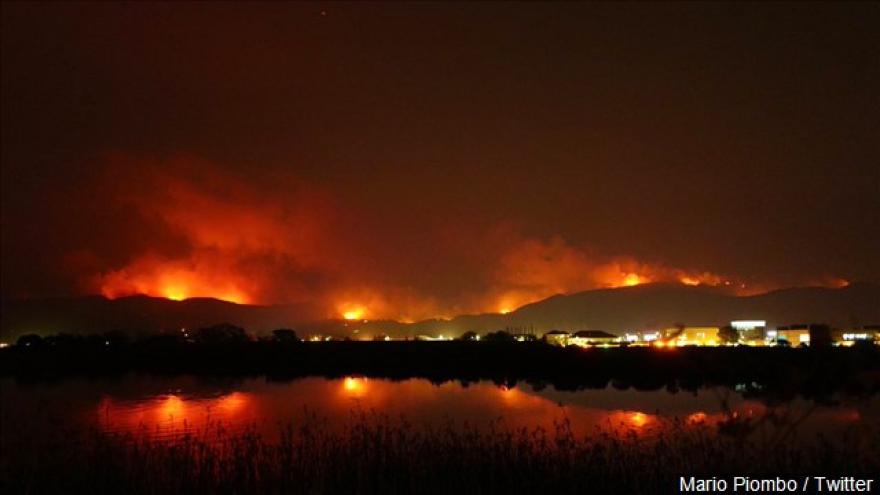 At least 21 people have died as a result of the wildfires burning in California, Cal Fire spokeswoman Heather Williams said Wednesday.

Firefighters battling deadly blazes in Northern California face a daunting new challenge Wednesday: Winds are expected to pick back up, threatening to spread wildfires that already have killed 17 people, destroyed hundreds of buildings and forced thousands of evacuations.

Most of the fires were ignited Sunday, driven by winds of up to 79 mph and dry conditions. The winds died down early this week, but gusts around 40 mph are possible Wednesday, and no rain is forecast for the next few days.

"Any time you get a wind gust over double digits, like 12 or 13 mph, that's when embers can fly," CNN meteorologist Chad Myers said. "Hot spots ... will be fanned by the (winds) today."

More than 20,000 people had been ordered to evacuate as of Tuesday night, and authorities were encouraging others to pack "ready-to-go bags" with documents and medicines in case they had to flee the fast-spreading flames on a moment's notice.

Sonoma County Sheriff Robert Giordano had a suggestion Wednesday for people who'd been advised to be prepared to leave: Go anyway.

"Traffic is bad in the county. If we have to evacuate people, it'd be better to have you (already) out of the area. If you have a place to go, go," he said.

"We are very concerned about all the fire lines, because of the wind they're anticipating," he said.

• Wildfires have burned nearly 170,000 acres in California. The largest fires were in Northern California's Sonoma, Napa and Mendocino counties, filling the picturesque landscape of the state's wine country with charred rubble and clouds of smoke.

• Of the 17 people who've died since Sunday night, 11 were killed in the Tubbs wildfire in Sonoma County, officials said. That makes the Tubbs fire, one of 22 blazes burning in the state, the sixth-deadliest fire in recorded California history, authorities said.

• Giordano said he expects the death toll to rise, in part because authorities generally aren't yet searching burned buildings for bodies. "We can't even get in most of the areas," he said Wednesday. "When we start doing searches, I expect that number to go up."

Families are frantically searching for those who have been reported missing. Authorities believe communications issues are preventing many of those people from checking in with relatives.

But one family's search for a loved one in Santa Rosa ended tragically.

Christina Hanson, 28, who used a wheelchair and lived in an apartment next to her father's house, was reported missing after the fire. Hanson had called her father's ex-wife to say she saw flames, but no one had heard from her after that, her family said.

After a day of panic and uncertainty, Hanson's cousin confirmed she had died in the fire.

Also among the dead were a couple who relatives said had known each other for nearly 90 years: Charles Rippey, 100, and his wife, Sara, 98.

They died shortly after the Atlas fire -- now one of the largest, at more than 42,000 acres -- began Sunday night, engulfing their home near the Silverado Country Club north of Napa, Napa County spokeswoman Kristi Jourdan said.

"This house was one of the first ones hit (in the subdivision)," their son Mike Rippey told CNN affiliate KPIX on Tuesday.

The couple met each other in grade school in Wisconsin and began a family together after Charles served in World War II, the son told KPIX. They relocated to California after living in the Midwest and on the East Coast, he said.

The son said he believed his father was trying to save his mother when the fire struck.

"From where they found his body, he was trying to get from his room to her room," he told KPIX. "He never made it. ... There is no way he would have left (without her)."

Elsewhere in the county, part of a veterans home in Yountville, near Napa, was evacuated Tuesday night over fears of approaching flames, but the fire changed directions, so the rest of the residents will stay put for now, Napa Mayor Jill Techel said. Only the most frail -- those in a nursing facility -- left the property in the initial evacuation, Techel said.

"We are set up with buses and everything we need to do if we get the call that a part of town or a part of Napa needs to be evacuated," Techel said.

The Tubbs fire, reduced cars and homes into burnt piles of ash and rubble in parts of Santa Rosa, a city of about 175,000 roughly 50 miles northwest of San Francisco.

That fire has burned 28,000 acres and destroyed at least 571 structures between Santa Rosa and the Calistoga area, Cal Fire said Tuesday.

A large part of Santa Rosa was evacuated. In the city's Coffey Park neighborhood, homes are in ruins -- the fire seemed to consume everything that wasn't steel, concrete or brick. At some properties, all that is recognizable are the remains of washers, dryers and water heaters.

Zach Block's house is among those destroyed in Santa Rosa. He said he woke up early Monday to the smell of smoke.

He, his wife, his 11-month-old daughter and his brother escaped -- but not before he tried to save the house.

"Within 10 minutes, my brother and I were out in the backyard with the hoses and trying to fight off as much as we could, and then we had to evacuate within five minutes of the fire touching down on the backyard," he told CNN's "New Day" on Wednesday.