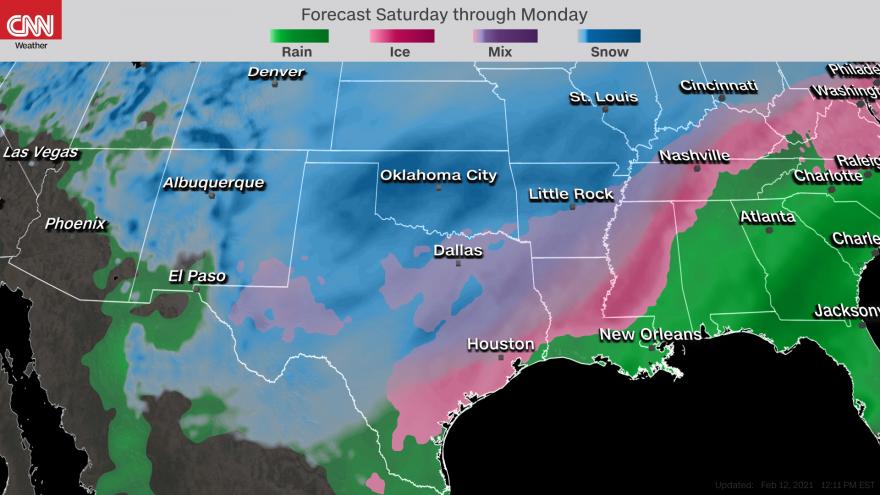 An even more significant winter storm could hit the same area of the southern US just glazed over with ice, which led to power outages, deadly car crashes, and record snowfall. - CNN Weather

(CNN) -- An even more significant winter storm could hit the same area of the southern United States just glazed over with ice, which led to power outages, deadly car crashes and record snowfall.

"The expansive dome of sub-freezing temperatures across the northern tier of the country has laid the foundation for winter storms to wreak havoc from coast-to-coast not only going into this weekend, but also into next week," the Weather Prediction Center warns.

Many southern states will have to brace for crippling ice and snow this weekend.

In the Dallas-Fort Worth area at least nine people have died in car crashes as of Thursday evening due to winter storms, according to a count by CNN. A 133-car pileup on Interstate 35 West in Fort Worth on Thursday left at least six people dead, according to Fort Worth Police Chief Neil Noakes.

This latest storm system will slide through the Rockies on Saturday, dumping snow from Wyoming through New Mexico. Snow totals will likely reach around 2 to 3 inches for cities like Cheyenne, Colorado Springs, down to Santa Fe and Albuquerque, New Mexico. Higher amounts will likely be found as you go up in elevation.

For the latter half of the weekend that system takes aim at Texas and Oklahoma, which could see up to one foot of snow between Lubbock and Oklahoma City.

Tulsa, Oklahoma, and Fayetteville, Arkansas, will be hit with two snowstorms over the next five days, increasing the odds for a foot of snowfall across this region.

There's "the potential for two major snowstorms -- one Sunday/Monday and another Tuesday/Wednesday -- to affect the forecast area, as well as a continuation and eventual worsening of the prolonged life-threatening cold," the NWS Office in Tulsa says.

Get the latest weather forecast here

And a separate system could deliver the worst ice storm in 20 years to swaths of the mid-Atlantic through Sunday morning -- a wintry mix of precipitation and freezing rain likely to cause power outages and nearly impossible travel conditions, according to the National Weather Service in Wakefield, Virginia.

The heaviest ice is forecast to accumulate across portions of eastern Virginia.

Additionally, ice storm warnings are in effect through Sunday morning for Washington, DC and portions of Virginia and Maryland. The National Weather Service is forecasting two- to three-tenths of an inch of sleet and freezing rain, making roads icy and dangerous.

Freezing rain and wintry precipitation has been ongoing early Saturday across portions of northern North Carolina, Virginia and southern Maryland.

In the Northwest, temperatures dipped to a record low 26 degrees Fahrenheit at the National Weather Service office in Seattle on Friday -- shattering the old daily record of 29 degrees in 2004.

And a daily maximum snowfall record was set Friday at the Seattle-Tacoma International Airport, where 2.2 inches were reported -- breaking the old record of 0.2 inches in 1995, according to the NWS.

Seattle remains under a winter storm warning through Saturday afternoon, with the NWS forecasting 4 to 6 inches of snow total through the end of the day. The city averages 6.8 inches of snow annually.

Winter storm warnings and advisories on Saturday spanned much of the Pacific Northwest and into the Intermountain West. Ice storm warnings were issued along the coasts of Washington and Oregon.

More than 310,000 customers were without power in Washington and Oregon, according to poweroutage.us.

The declaration allows the state Office of Emergency Management to mobilize State Police and the National Guard as necessary to help with emergency response.

Areas from Montana to Minnesota have been under wind chill alerts for at least a week, experiencing "feels like" temperatures as cold as 60 degrees below zero at times. Wind chill alerts encompass over 65 million people from the Canadian border down to southern Texas, as the arctic outbreak continues to surge south over the next few days.

In Texas, record-breaking snowfall will be possible in some cities.

Confidence is growing for a significant snow event for the Red River Valley and surrounding areas this weekend.

The Dallas-Fort Worth area is expected to pick up 4 to 6 inches of snow Saturday night through Monday. This would be the first February with more than a trace of snow since 2015.

If the city measures over a foot of snowfall in one day, that would approach record snowfall. In February 2010, Dallas-Fort Worth International Airport had a record breaking 12.5 inches in just 24 hours.

That storm triggered widespread power outages, downed tree limbs and broken transmission lines. Clean up from the tree damage lasted weeks. These will all be concerns again with the upcoming storm, especially if they receive similar snowfall totals.

"We ask that everyone start conserving energy," said Texas Public Utility Commission DeAnn Walker. "We have no additional generation we can add to the system."

Walker asked that residents conserve energy, including turning thermostat to 68, close shades or blinds, avoid using large appliances and unplug any equipment not in use.

"Regardless of how much snow is received, the bigger threat will be the extreme cold we are expecting on the heels of the system," the NWS Office in Dallas-Fort Worth says.

"Ongoing sub-freezing temperatures will plunge even further as another surge of arctic air arrives."

It has already been cold there, so depending on the wind direction and the amount of moisture present, a rare occurrence of lake-effect snow forming over some of the larger lakes in North Texas could be possible.

Other areas in Texas will also get hit with fresh powder including San Angelo, Amarillo and Lubbock. The forecast for the Lubbock area is around 4 to 8 inches. If Lubbock ends up receiving 8 inches that would crack its top 10 snowiest days.

The forecast for this region is for 6 to 9 inches of snow.

Further east, Oklahoma City could see it largest snowfall in a decade, with a forecast of 8 to 10 inches.

Snowfall totals of 4 to 8 inches are expected from the Rockies through the southern Plains and into the Ohio River Valley through Monday.

Ice concerns in the South

South and east of all of this forecast snow is the risk for ice. Some cities that typically don't experience wintry weather will be dealing with a slippery mess.

The first round of freezing rain will be possible Saturday night into Sunday across northeastern Texas, into southern Arkansas and northwestern Louisiana.

Ice buildup totals should be light. But just a glaze of ice can cause treacherous conditions on roads.

As more moisture surges north from the Gulf of Mexico Sunday night and Monday, however, a more significant icing could be possible further south.

"This system will bring more significant widespread frozen [precipitation] accumulations ... perhaps as far south as the coast," says the NWS office in Houston.

Houston and other Texas cities such as San Antonio and Austin -- as well as Shreveport, Louisiana -- will be at risk for icing by Monday. But the exact details in the forecast are still unknown.

Freezing rain is often difficult to predict. The temperatures at the ground level and up in the atmosphere need to line up perfectly to produce this kind of precipitation.

The system will then continue to track north and east toward the East Coast of the US by mid-week. This may introduce icing from Mississippi through the Ohio River Valley, impacting similar locations as earlier this week.