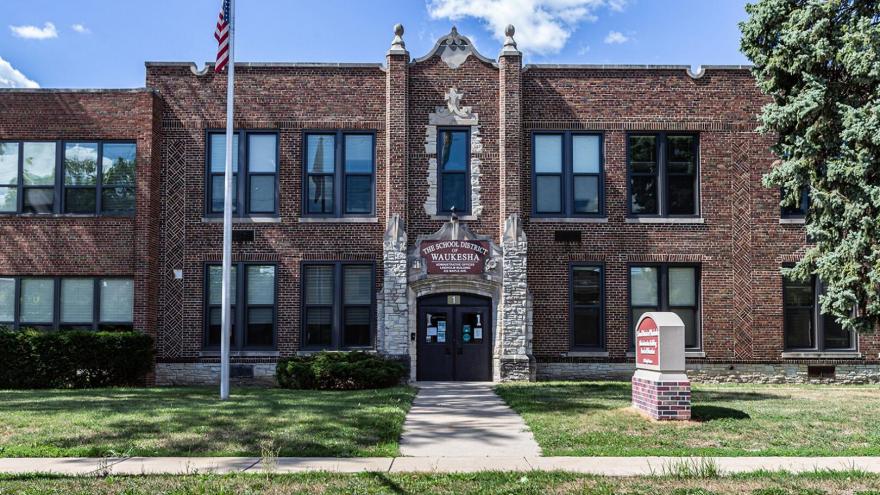 Ongoing conflict between parents and schools over virus mitigation for children in the classroom has gone to court in Wisconsin, where two parents are suing their children's school districts over their Covid-19 infection. The Waukesha School District building is shown in this file photo.

(CNN) -- Wisconsin parents are suing two school districts over their Covid-19 mitigation efforts, arguing that the systems failed to protect their children from getting infected.

The first lawsuit was filed in federal court last week by Shannon Jensen against the Waukesha School District, the Waukesha Board of Education, a number of school board members and district employees, according to the court documents.

Then Monday, Gina Kildahl filed a separate complaint against the Fall Creek School District, the board, its superintendent and individual board members for "recklessly refusing" to implement Covid-19 mitigation strategies recommended by the CDC, according to the complaint.

"By bringing students back to class around unmasked staff, reinstituting extracurricular activities, and allowing potentially contagious visitors and volunteers into the schools without masks, FCSD and the BOARD threw students into a Covid-19 'snake pit' creating an affirmative duty to keep their students safe from Covid-19," Kildahl's complaint read.

Officials and members of the public alike put a high priority on getting students back into in-person learning at the start of this academic year, but how to do so has been a flashpoint for dispute nationwide. The CDC recommended that all school staff and students wear a mask indoors regardless of their vaccination status, but these measures have not been universally instituted.

The risk of coronavirus infection among children appears to be similar as among adults -- but kids are more likely to be asymptomatic, according to a new study in the journal JAMA Pediatrics.

Speaking to CNN on Tuesday morning, Kildahl said that her son tested positive for Covid-19 after he was in close contact with an infected student who did not wear a mask. Her son was asymptomatic and is now doing well, but she said she was worried about long-term effects. Neither she nor her husband tested positive for the virus.

"I am just hoping that they will start masking and take some responsibility to keep our kids safe at school," Kildahl said. "On my school's website, on all of their board documentation, they say that they want to provide a safe place to learn. And I think that to do that, especially with the Delta variant out there, they need to start masking kids."

"Universal masking is what our county health department suggests, just so that all the kids are on the same playing level," she said.

Jensen's lawsuit alleges that the school district and board are "knowing, needlessly, unreasonably and recklessly exposing the public" to the virus by continuing to hold classes "without adequate Covid-19 mitigation," according to the court documents.

CNN has reached out to the school board and district Superintendent James Sebert.

Jensen said in court documents that she sent her three children to Rose Glen Elementary School for the 2020-21 school year, and that the school implemented masking, temperature checks, plexiglass dividers and contact tracing.

But this school year, the district's school board voted to remove most mitigation, including masking requirements. The family had their three children wear masks daily, but many other students did not do the same, according to court documents.

In September, Jensen said in a court declaration, her oldest child tested positive for Covid-19. According to court documents, she isolated all three children to prevent spread for 10 days. A few days later, another one of her children tested positive as well.

The school notified families that two students tested positive in her son's classroom around the time of his infection, but a parent later told Jensen it was four, according to court documents.

The lack of mitigation and delay in communication about infections was a risk to the community, Jensen said in her declaration. Her son had attended community, church, and Cub Scout functions before testing positive.

It's unclear from the court documents how long the delay was between children testing positive and the school notifying parents.

"The School District of Waukesha's refusal to implement reasonable Covid-19 mitigation strategies, not only affected our immediate family, but if we had been notified sooner of my oldest son's close contact with someone who was diagnosed with Covid-19, we could have prevented possible further community spread of the virus," Jensen said in the court declaration.

Both lawsuits -- which are seeking class action status -- are funded by the Minocqua Brewing Company Super PAC, according to its Facebook page. A super PAC is an independent political action committee that can raise unlimited sums from corporations, unions and individuals to influence elections. It is barred, however, from donating directly to candidates.

Sick classmate did not wear a mask, Kildahl's lawsuit says

Kildahl's child is identified as SK in the suit. "SK's sick classmate did not wear a mask to school," read the complaint.

"On September 27, 2021, SK tested positive for Covid-19." According to complaint, the child quarantined and missed two weeks of school.

CNN has reached out to the Fall Creek School Board and school district.

Minocqua Brewing Company owner Kirk Bangstad said Sunday that the super PAC raised more than $50,000 within the past two weeks "specifically by asking people to donate to these lawsuits."

"The Minocqua Brewing Company Super PAC has just embarked on the boldest project we've ever taken on -- suing every school board in Wisconsin that doesn't follow CDC guidelines to protect the spread of Covid in schools," a post on the Facebook page said.

Currently, vaccines are only available to children 12 and older. Especially for unvaccinated children, the CDC recommends that schools employ multiple layers of protection, including universal masking, distancing, handwashing, testing, disinfection and quarantine and isolation.