Wisconsin Supreme Court prohibits use of most ballot drop boxes 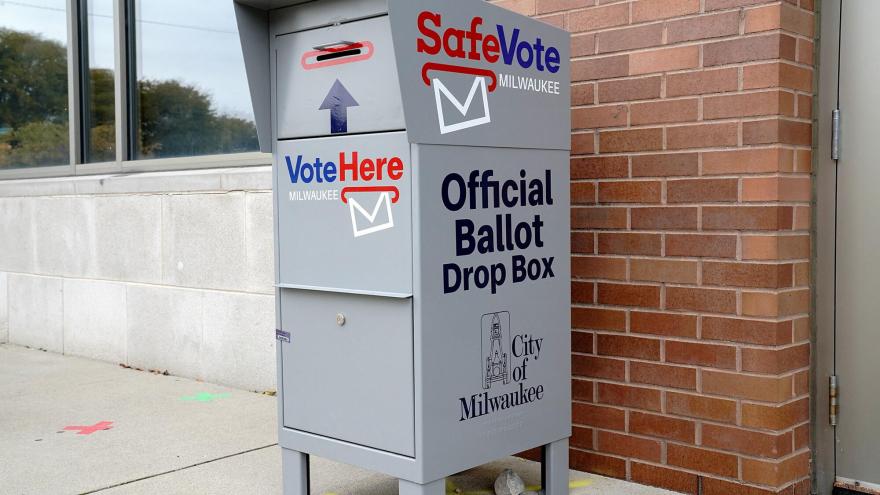 An official drop box for mail-in ballots is seen outside a polling site in Milwaukee, Wisconsin, on October 20, 2020.

(CNN) -- The Wisconsin Supreme Court on Friday barred the use of most ballot drop boxes and ruled that no one can return a ballot in person on behalf of another voter -- dealing a blow to Democrats ahead of crucial contests in this perennial battleground state.

Voting rights groups and Democrats had argued that restricting ballot drop boxes would make it harder for some residents to vote, especially those with disabilities. Conservative interests in Wisconsin, meanwhile, had maintained that voting practices employed in the state during the 2020 election, such as the widespread use of ballot drop boxes, violated state law and opened the door to potential fraud.

State law does not address ballot boxes, but, in the 4-3 ruling Friday, the court's majority said the absence of an outright ban does not mean they are legal. "Ballot drop boxes appear nowhere in the detailed statutory system for absentee voting," Justice Rebecca Bradley wrote.

The majority ruled that the Wisconsin Election Commission -- a six-member panel that helps oversee voting in the state -- had overstepped its authority when it issued guidance to local election clerks to allow the use of drop boxes to return absentee ballots in the 2020 election, during the height of the pandemic. In its ruling, the court said absentee ballots can be dropped off by the voter at the clerk's office or another designated site -- but not at an unmanned ballot box.

The justices did not address whether someone can mail a ballot on behalf of another voter -- leaving open the possibility of some third-party ballot collection.

The decision comes roughly a month before the Wisconsin's August 9 primaries and establishes the ground rules for the state's high-stakes elections this year. Wisconsin Gov. Tony Evers, a Democrat, is seeking a second term, and Sen. Ron Johnson, a Republican, is up for reelection in a race that could help determine which party controls the US Senate. And the 2024 presidential contest will likely turn on the election outcome in Wisconsin and a handful of other battleground states.

In a statement Friday, Evers called the decision "another in a long line of Wisconsin Republicans' successes to make it harder for Wisconsinites to exercise their right to vote, to undermine our free, fair, and secure elections, and to threaten our democracy."

Rick Esenberg -- the president of the Wisconsin Institute for Law and Liberty, which brought the lawsuit challenging drop boxes and collecting ballots on behalf of other voters -- said the decision provides "substantial clarity."

"Wisconsin voters can have confidence that state law, not guidance from the (Wisconsin Election Commission), has the final word on how Wisconsin elections are conducted," he said in a statement posted on Twitter.

The Wisconsin Election Commission's guidance easing voting procedures during the pandemic has faced intense criticism -- including calls to dismantle the bipartisan body -- from some Wisconsin Republicans after President Joe Biden narrowly won the state by fewer than 21,000 votes in 2020.

Drop boxes have grown in popularity in recent elections in the Badger State: More than 520 ballot drop boxes were used in the 2020 general election, with that number increasing to 570 across 66 of Wisconsin's 72 counties during spring elections in 2021, according to numbers cited in Friday's decision.