With New Hampshire days away, other primary states project confidence after Iowa debacle 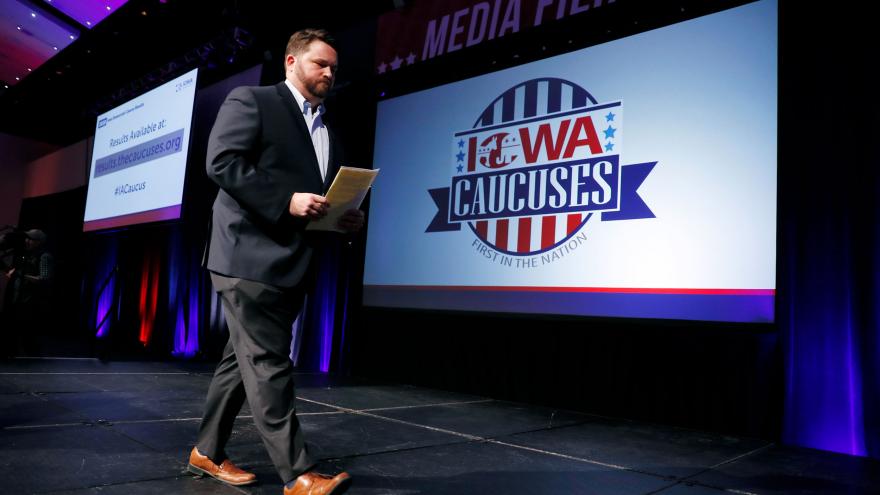 (CNN) -- The mess that unfolded in Iowa Monday night has put a spotlight on the voting infrastructure in the remaining state primary and caucus contests -- and stoked fears of something similar happening as the race for the Democratic nomination rolls forward. But elections officials and party leaders in the majority of the remaining states tell CNN that what happened in Iowa won't happen in their own contests.

The next contest, the New Hampshire primary, is just days away, followed by the Nevada caucuses on February 22, the South Carolina primary on February 29, and a slate of primaries in 14 states on March 3, also known as Super Tuesday.

In the wake of Iowa, CNN reached out this week to the other 49 states with upcoming nominating contests (plus the District of Columbia) to determine what contingency plans exist should things go wrong. Elections officials and party leaders in 34 of those states responded.

One of the early lessons election officials around the country are taking from the Iowa disaster is that the state Democratic Party tried to do too much too fast. By pushing technological changes and new transparency rules, the party inserted confusion into what was already a complicated process.

"As an election official, I can understand the pain they're going through right now," said David Scanlan, the deputy secretary of state in New Hampshire, in an interview Tuesday morning. "In New Hampshire, we have stuck to the basics and fundamentals."

The fallout has been swift and acrimonious. On Tuesday, the Nevada Democratic Party announced that it would not be using the same app or vendor that Iowa used in the Nevada caucuses later this month. On the same day Democratic National Committee chairman Tom Perez said the app and vendor wouldn't be used in any Democratic Party nominating contest. By Thursday Perez went even further, calling on the Iowa Democratic Party to "immediately begin a recanvass" the results -- meaning the state party that was still counting results would also have to review the paperwork from each caucus.

In a sign of intra-party tension, the IDP shot back at Perez with a statement saying that it would conduct such a process only if a request to do so came from a presidential campaign.

It's not exactly the conversation Democratic Party leaders want to be having in the crucial days between the Iowa caucuses and the New Hampshire primary.

Run by the state

Unlike the Iowa caucuses, which are run by the respective state parties, nearly every upcoming contest is administered by the state election authority.

These upcoming primaries and caucuses are governed by a patchwork of laws and rules that vary from state to state. Most are governed by state election officials, often administered by county or local authorities. But a few contests are, like the Iowa caucuses, conducted by the state parties themselves, without significant involvement from local or state governments.

The majority of the other states have either done little to change their long-existing procedures or simplified their nominating contests. The trend of electronic voting machines that began following the contested Florida results in the 2000 presidential election has now faded, and many states have reverted to using paper ballots with electronic counting machines.

And several states that have used the caucus format have switched to a more traditional primary election.

Indeed, the Iowa caucuses might be the exception and not the rule. Monday's contest was only the first step in a five-month nomination process that includes more traditional primaries than ever and where election professionals, not party officials and volunteers, are in charge.

"I don't want to sound overconfident, but we have a lot of experience dealing with very close elections and a lot of scrutiny about those elections," said Reid Magney, a spokesman for the Wisconsin Elections Commission. "We know not to roll out new technology right before an election."

The power of paper

Next week's New Hampshire primary will rely almost exclusively on paper ballots that, if necessary, can be counted by hand. Many local precincts in New Hampshire use electronic machines to count paper ballots, but poll workers are trained to manually tabulate votes if the machines malfunction. Even machines for voters with disabilities in New Hampshire generate paper receipts after the fact so that there is a hard record of each vote.

The process is also highly decentralized, with each precinct counting and reporting its results directly to the state. And because the counting machines aren't connected to the internet, any issues with an electronic device will be isolated.

Primary voters in Colorado, Washington and Oregon also vote on paper but uniquely use those states' mail-in ballot procedure. Under state laws, there is a paper ballot for every voter, an important safeguard in case something goes wrong along the way.

"That's the beauty of having paper ballots," said Kylee Zabel, a spokeswoman for the Washington secretary of state's office.

The Democratic primaries in Hawaii and Kansas will also use paper ballots exclusively, but in both states the process will be conducted by the state party, not state elections officials.

Some use a combination of paper ballots and electronic voting machines, including Arkansas, California, North Carolina, Tennessee, Texas, Missouri, Pennsylvania and Indiana. (California voters also have a mail-in option.) A spokesman for the Texas secretary of state told CNN that the state expects to have the majority of its counties using paper-based voting systems by the 2020 general election.

Few states exclusively use electronic voting machines instead of paper ballots -- Georgia and Delaware are the only two whose officials spoke to CNN. But even those voting machines use paper receipts, along with digital imaging, to back up the results.

For the states that use them, paper ballots offer an added level of security in the event of a failure of the electronic record. Donna Duncan, a spokeswoman for Maryland's board of elections, said every paper ballot is transferred to the respective county headquarters, eventually getting locked in a sealed box and stacked in a warehouse if there's ever need for a recount.