With new urgency, Biden makes his case to the American people for Covid-19 relief 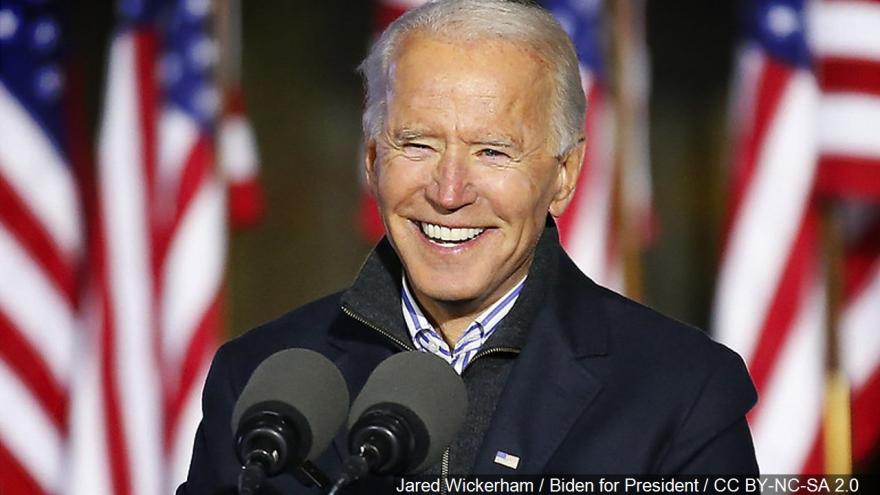 (CNN) -- President Joe Biden came to Washington with big dreams of bipartisanship, but the practicalities are now setting in.

With Congress still deeply polarized following former President Donald Trump's acrimonious exit, and with dangerous variants of the coronavirus circulating in the US, the President signaled a new sense of urgency Friday about the need to get his $1.9 trillion Covid-19 relief package passed -- even if he is not able to bring Republicans along.

Meeting with Treasury Secretary Janet Yellen in the Oval Office, the President warned of the "cost of inaction," pointing to alarming new job losses, the hunger that some 30 million Americans are facing every day, as well as the possibility that "an entire cohort of kids" could face "lower lifetime earnings because they're deprived of another semester of school."

"We have to act now; there's no time for delay," Biden said.

He punctuated that point less than two hours later on his way to visit Walter Reed National Military Medical Center when a reporter asked him whether he was willing to achieve his goals by using reconciliation -- an arcane procedural tactic that would allow Democrats to pass the relief bill on a party-line vote.

"I support passing Covid relief with support from Republicans if we can get it," Biden replied. "But the Covid relief has to pass. There's no ifs, ands or buts."

Biden has been firm about his efforts to reach across the aisle, but he is making it evident that he does not intend to wait forever before pressing ahead with his agenda. Administration officials are expected to continue their outreach to Republican senators through this weekend and into next week, and Biden has personally reached out to more moderate GOP senators like Susan Collins of Maine and Rob Portman of Ohio.

But his team is also increasingly making their case to the American people, as the administration faces resistance to the size and scope of the bill from the GOP. In all of Friday's White House events, the underlying message was clear, and aimed squarely at the American people: your daily lives will not change without a substantial relief package to reinvigorate the economy and give schools and health care providers the resources they need to speed up vaccinations.

Persuading that broader audience could be an effective tool as frustration grows across America about the slow pace of vaccinations and the anemic economy -- one that could nudge wavering Democrats and some Republicans to get on board.

It was no coincidence that Vice President Kamala Harris popped up this week in the backyards of moderate Democratic senators like Kyrsten Sinema of Arizona and Joe Manchin of West Virginia, to press for swift passage of Biden's proposal. Speaking to editors and executives from the Charleston Gazette-Mail and Herald-Dispatch in West Virginia, Harris made the case that lives are on the line.

Manchin, however, appeared to express frustration Friday over a television interview Harris did with CNN affiliate WSAZ to promote the administration's Covid-19 relief proposal.

"I saw it. I couldn't believe it. No one called me," the Democratic senator said in an interview with the same West Virginia station. "We're going to try to find a bipartisan pathway forward. I think we need to, but we need to work together. That's not a way of working together, what was done."

Harris' office did not respond to a request for comment. Manchin's office also has not responded to questions about recent outreach between the senator and the White House.

'We need to act now'

The administration's sense of urgency was plain on Friday in the comments from Biden's coronavirus advisers in their press briefing; from Yellen, moments before she briefed the President on the economy; and from White House press secretary Jen Psaki at the podium in the White House briefing room.

Talking about the current threats that the virus poses to the economic recovery, the millions of children who are being deprived of in-person education -- and the unpredictability of the virus itself through the lens of the administration's scientists -- they were all making the case that Biden's proposal would get normal life back on track.

During a briefing by the White House Covid response team — where Dr. Rochelle Walensky, director of the US Centers for Disease Control and Prevention, and Dr. Anthony Fauci, chief medical adviser to the President, warned about the dangers of the emerging virus variants from countries like South Africa and Brazil -- both stressed the importance of speeding up the pace of vaccinations, a key goal of Biden's legislative package.

Now that it is clear that the US will continue to see "the evolution of mutants," Fauci said Friday, the government and vaccine makers must become more "nimble" and "adjust readily" to make versions of the vaccines that can handle the mutations.

He said it was likely that some mutations of the virus, like the variant found in the UK, could become more dominant in this country by March or early April, underscoring the need to quicken the pace of vaccinating as many Americans as possible before then: "The fundamental principle of getting people vaccinated as quickly and as efficiently as you possibly can will always be the best way to prevent the further evolution of any mutant," he said. "Because when you do that, you prevent replication, and replication is essential for mutation."

Walensky noted that reopening schools remains a top priority for the administration, along with millions of parents across America, and argued that "accumulating data" has shown that school settings don't result in the rapid spread of the virus when proper precautions are taken, like masking, distancing and ventilation.

"But we recognize many communities lack sufficient capacity to do all that is needed," she said, alluding to cash-strapped school districts that have not been able to reduce student density and put those safety measures in place. "That is why it is essential that the guidance, tools and resources called for in the national strategy for the Covid-19 response and the American Rescue Plan are provided to communities," she said referring to Biden's proposed legislation.

In comments to reporters before her meeting with Biden on the current economic data, Yellen noted that over a million people applied for unemployment insurance just last week -- "that's far more than in the worst week of the Great Recession," she said.

"Economists agree that if there's not more help, many more people will lose their small businesses, the roofs over their heads, and the ability to feed their families. And we need to help those people before the virus is brought under control," Yellen said. "The President is absolutely right: The price of doing nothing is much higher than the price of doing something, and doing something big. We need to act now, and the benefits of acting now and acting big will far outweigh the costs in the long run."

In her briefing, Psaki hinted that the President will be taking "creative steps" in the coming weeks to build support for his proposal that will include more local interviews like the ones Harris did this week, as well as engaging state and local leaders to build consensus.

"He fully recognizes, as do we, the importance of speaking directly to the American people about the components of this package, whether it's the importance of funding to get schools open or get vaccines in the arms of Americans, or just ensure that people know they can put food on the table," Psaki said.

And as they make that case, there's no doubt the administration hopes they'll be able to change the minds of some key lawmakers in the process.