With the coronavirus under control, this Chinese city wants to score and rank its residents based on their health and lifestyle 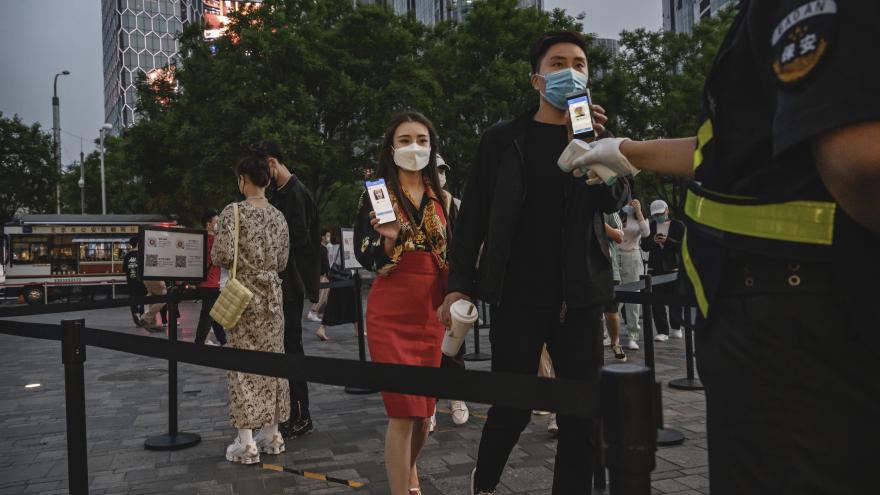 (CNN) -- Imagine a smartphone app that has access to your medical records and assigns you a daily score based on your preconditions, recent checkups and lifestyle habits -- how much you've drunk, smoked, exercised and slept on any given day can all affect your points total, boosting or lowering your ranking.

That "health score" will be embedded in a digital QR code accessible on your phone, ready to be scanned whenever needed.

This is what the city government of Hangzhou in eastern China has envisioned for its more than 10 million residents, inspired by a "health code" system it adopted during the Covid-19 pandemic to profile people based on their risk of infection.

Across the globe, governments have stepped up the collection of personal data in their fight against the novel coronavirus, which has killed more than 345,000 people and infected close to 5.5 million, according to data collected by Johns Hopkins University.

But there are also fears that some of these extraordinary measures could be here to stay even after the public health crisis is over, posing a long-term threat to privacy.

That concern was amplified among Hangzhou residents when their municipal government announced Friday that it was planning to make permanent a version of the "health code" app used during the pandemic.

Since February, the Chinese government has used a color-based "health code" system to control people's movements and curb the spread of the coronavirus. The automatically generated quick response codes, commonly abbreviated to QR codes, are assigned to citizens on their smartphones as an indicator of their health status. The color of these codes -- in red, amber or green -- decides whether users can leave home, use public transport and enter public places.

The health codes can also serve as a tracker for people's movements, as residents have their QR codes scanned as they enter public places. Once a confirmed case is diagnosed, authorities are able to quickly trace where the patient has been and identify people who have been in contact with that individual.

Hangzhou, a coastal city about a hundred miles southwest of Shanghai, was among the first cities to use the health code system to decide which citizens should go into quarantine. But now, the city government says it wants the "health code" to be "normalized" -- meaning it could be here to stay well beyond the pandemic.

At a meeting of the Hangzhou Municipal Health Commission on Friday, Sun Yongrong, the director of the commission, said they were looking to establish a system that can assign citizens a personal score, color and ranking based on the collected data on their medical history, health checkups and lifestyle habits.

An image demonstrating the design of the proposed system posted on the commission's website shows the daily health score will range from 0 to 100, corresponding to a color in a gradient from red to green.

The score can be affected by your daily activities: 15,000 steps of daily exercise will increase your score by 5 points, 200 milliliters of baijiu -- a sorghum-based Chinese liquor known for its high alcohol content -- will lower your score by 1.5 points, five cigarettes will cost you 3 points, and 7.5 hours of sleep will add one point to your score, the demonstration shows.

There might also be a "group health score" for companies and residential committees, Sun said. A demonstration shows the health score for a company can be based on factors such as how much its employees exercise and sleep per day, how many employees have conducted annual health checkups, and how well chronic disease are controlled among its employees.

Sun did not give details on how the data will be collected, whether the app will be compulsory, or how the score will affect people's daily life and business operations.

However, the proposal was already met with criticism and anger on Chinese social media, with many users raising privacy concerns.

"Medical history and health checkup reports are personal privacy, why should they be included in health codes to show others? Points will be deducted for smoking, drinking and not sleeping enough, does this mean our lives will be completely monitored?" said a user on Weibo, China's Twitter-like platform.

"During the epidemic we had no choice, but I hope after the epidemic individuals will have the right to delete the app, instead of normalizing (its use)," another user said.

The proposal has also raised questions over its wider application. On Zhihu, China's version of Quora, some users voiced concerns against its possible exploitation by insurance companies and marketing firms, while others worried that it could lead to employment discrimination against people with lower scores.

The proposed health code system bears similarities to China's social credit system, an ambitious social-engineering style project that uses big data and a combination of rewards and punishments to incentivize good behavior. In Hangzhou's pilot scheme of the social credit system, residents are assigned a score based on certain behaviors such as their ability to pay debts and fees on time and the amount of community volunteering work they've completed.

Hangzhou, home to China's e-commerce and internet giant Alibaba, has been at the forefront of applying big data and digital technology to urban management. At the moment, it is unclear if the city's health score proposal will be adopted and rolled out nationwide like the coronavirus QR codes.

Some Chinese internet users, however, are already questioning the feasibility of the plan, pointing to technical difficulties such as how to convert different medical conditions into scores and come up with a workable algorithm.

"This is too big a step. No matter how willing are Chinese people to sacrifice their privacy in exchange for conveniences, (the health score) will surely spark discontent from many users," said a comment on Zhihu.