With virtual reality police training, Sacramento tries to 'get to a much better place' 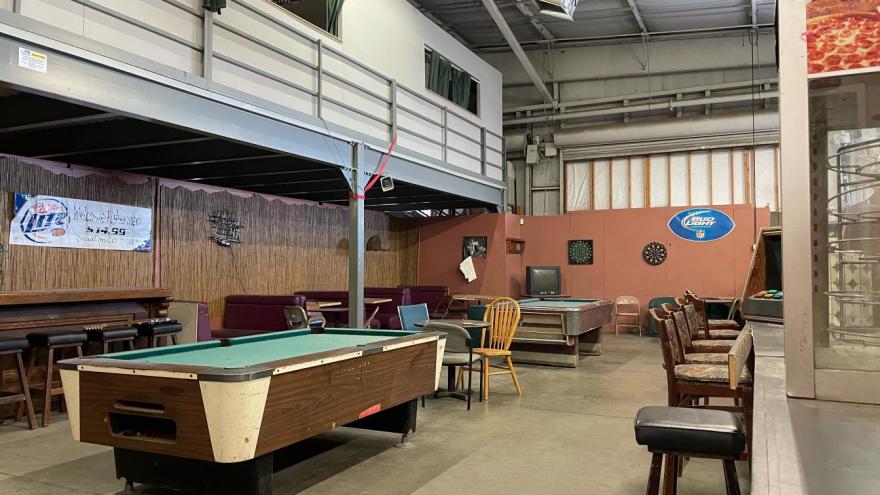 Sacramento Police use multiple settings for its hands-on training. Pictured here, the skeleton of a full pool bar where officers go through different scenarios.

(CNN) -- With police training programs across the country under intense scrutiny after Derek Chauvin's murder conviction, one department in California is using several high-profile police killings of Black Americans as it trains the next generation of officers to better anticipate and respond to high-risk encounters.

The Sacramento Police Department's training techniques have been largely shaped by the police killing of Stephon Clark, a 22-year-old Black man, in the city in 2018. And graphic videos of recent fatal police shootings, including 16-year-old Ma'Khia Bryant in Columbus, Ohio, and 20-year-old Daunte Wright in Brooklyn Center, Minnesota, are serving as teachable moments in the agency's hands-on training program.

"When people say 'defund the police' because we have racism in our past, first of all, we have to acknowledge that's absolutely true," Sacramento Police Chief Daniel Hahn told CNN. "But the way to get beyond it is to talk about it and do something about it... With equipment and training and to deal with what historically has been in our country in terms of things that lead to biases and racism, I think we can get to a much better place."

Chauvin's trial has made officer training a focal point in discussions to overhaul policing after testimony from several law enforcement officials against the former cop. Minneapolis Police Chief Medaria Arradondo testified that Chauvin violated department policy and his use of force was unjustified when he kneeled on the neck of George Floyd for 9 minutes and 29 seconds, which led to his death. Chauvin's conviction on murder and manslaughter charges has further fueled national calls for police reform since Floyd's killing last May.

On the federal level, President Joe Biden is preparing to put police reform in the spotlight during his first address to a joint session of Congress on Wednesday amid bipartisan talks on Capitol Hill to advance landmark police reform legislation. The George Floyd Justice in Policing Act passed the House in March, but it does not have the 60 filibuster-proof votes required to advance in the Senate in its current form.

The president's address before Congress comes on the heels of Attorney General Merrick Garland's announcement that the Justice Department has launched federal probes into the practices of two police departments in Louisville, where Breonna Taylor was killed, and Minneapolis.

Technology is at the forefront

Just over two years ago, Clark was shot seven times in his grandmother's backyard by two officers who were responding to a report that a man wearing a black hoodie was breaking car windows in a Sacramento neighborhood, according to authorities.

The officers said they believed Clark was pointing a gun at them, but authorities said that the only object that was found near him at the scene was a cellphone. Federal prosecutors declined to file civil rights charges against the officers, who were later put back on active duty. Protests erupted in Sacramento after the incident and public outcries mounted after the US Attorney General's decision.

In the cycle of fatal police shootings and the subsequent protests that take place, the focus should be on the actions after the incidents occur to ensure real change, according to Marvin Perkins, a liaison for Brother to Brother, a nonprofit organization in Sacramento geared toward mentoring Black male youth.

"It's critical that we have healthy relationships with law enforcement and our community," Perkins said. "Protesting has its place, but after the protests, then what? We gotta talk solutions and being able to sit down and converse with people who you may not agree with... If you don't have that, we'll never get to a place to where we can actually resolve the situations that we're facing as a community."

Technology has been critical in the Sacramento Police Department's training program since Clark's killing, with virtual reality simulations allowing officers to be trained in multiple environments virtually without dealing with the logistics involved in regular training, Lt. Zach Bales told CNN.

Controversial police incidents across the country can be turned into virtual reality simulations "almost instantaneously" after they come to light, allowing the training division to tailor objectives and incorporate lessons learned into the training, according to Bales. The virtual reality center takes elements from real-world police shootings in their reenactments to inform officer training.

"We could author a scenario in a day and have officers training on it the next day," Bales said. "The closer we get to the real world, the better the training is." But the training requires time, effort, money and controls to be effective.

The anticipated outcome, according to Bales, is that the new curriculum will save lives. The crux of the training is not only focused on use of force or "shoot, don't shoot" practices, but it's the critical decision making that occurs before, during and after officers respond to a call, he said.

"What happens before you arrive to the call, how do you prepare for that call mentally, what resources do you get there?" Bales said. "Then once you're at the call, slowing it down to the point where the officer sees the options available to them as they present themselves, to focus on a better outcome all together."

In the high-tech training, officers wear a headset and sensors that are picked up by virtual reality "lighthouses," which operate on a system of Infared light that tracks the movement of their arms as well as use of force weapons, such as pistols and Tasers. While wearing the headset, officers are completely immersed in real-world scenarios while listening to an instructor who gives directions and acts as the subject's voice in a simulated police encounter.

Virtual reality induces a physical reaction that officers might have only "mildly experienced" in a classroom setting where they are surrounded by flat screen TVs to deliver training, according to Bales. The goal is to accelerate the learning curve for younger officers so that their experience is on-par with more experienced veteran cops, he said.

"It can trick the brain very quickly into putting you physiologically in that environment and helping with that stress inoculation that officers need in order to make good decisions in high-stress situations," he said. "They're able to see all of the options available to them instead of being narrowly focused on an individual threat or an individual problem."

One of the mandates under the research and development division created by Chief Hahn is to stray away from being reactive, but to be "proactive," Bales said. A use of force review board for the agency looks at whether police actions are legally justified and in line with department policy. A separate committee of experts in the field also examines both good and bad scenarios to improve outcomes.

Training reflects trend across the country

The Sacramento Police Department has ramped up other training techniques, such as de-escalation, peer intervention, cultural competency and implicit bias, which agencies are seeking to implement nationwide as they strive to meet community calls for reform.

Since last year, state lawmakers have been scurrying to pass legislation that would overhaul policing, including actions to ban chokeholds and eliminate so-called qualified immunity that protects officers accused of violating citizens' Constitutional rights while on duty.

The 18,000 police agencies across the country's 50 states -- each with its own set of minimum standards for police — have been urged to reimagine their training and practices amid heightened public scrutiny of police.

The challenge, however, is the decentralized nature of policing in America, according to Chuck Wexler, executive director of the Police Executive Research Forum (PERF). Over 75% of the country's agencies are much smaller compared to those in New York City or Los Angeles, which are at a distinct advantage with more resources and a budget that can bring better training into the curriculum, Wexler said.

Too many police reform efforts focus on remedies after the incident takes place and there needs to be a "major investment" in training, research and innovation that prevents incidents of police brutality against the country's citizens, according to Wexler.

PERF has developed a training program called Integrating Communications, Assessments, and Tactics (ICAT) that teaches officers how to manage critical police incidents. The program, which has incorporated advice from hundreds of policing experts, caters to situations involving people who are "unarmed or are armed with weapons other than firearms," according to its website. Over 600 agencies have already started to implement ICAT into its training, and the goal is to roll out the program nationwide, Wexler said.

An evaluation of the program by Robin Engel, a professor of Criminal Justice at the University of Cincinnati, found that ICAT helped reduce use of force by Louisvile police officers by 28%, as well as a 26% drop in citizen injuries and a 36% decline in officer injuries.

One controversial issue in fast-evolving police encounters is that cops often have to make "split-second" decisions to use force, which is sometimes deadly. De-escalation strategies aim to slow down situations to make better decisions in the moment.

Another movement is underway in police agencies to train officers in crisis intervention by using de-escalation techniques, heeding arguments that law enforcement should not be the first to respond to mental health emergency calls. Peer intervention training, which is used in the Sacramento agency as well as the New Orleans Police Department, requires cops to check their fellow officers' acts of misconduct, such as use of excessive force.

"We need to ensure that our officers are ready and prepared, not only for a very diverse city that has very different neighborhoods, but also for the wide variety of calls that they're going to respond to," Chief Hahn told CNN. "How do we change the system to where officers aren't responding to some of those calls? What new practices can we put into place in Sacramento?"

Crisis response teams have been set up in many cities since the movement to defund police departments and reallocate money into social programs gained traction. In Sacramento, the city created the Department of Community Response in 2020 to "establish an alternative response model" for calls that don't require a law enforcement response.

"That is going to hopefully handle some of the mental health calls so officers in many cases don't have to respond," said Chief Hahn. "But even in the times where there's potential for violence, officers respond and ensure that the violence is taken care of, and immediately hand it over to social workers and mental health professionals."